Home /Marriage Custom
In China, marriage has gone through for a long time. As a most grand etiquette, it has always been a high degree of attention. To control the marriage, the family and the whole society, since the beginning of Zhou Dynasty, Chinese marriage should comply with six procedures, which is the so-called "six etiquettes." And Later in Tang and Ming Dynasty in China, marriage also complied with the "six etiquettes". As time goes by, although many wedding customs experienced various changes "Six etiquettes" as the basic pattern has not changed much. It is still essential and core in marriage custom.
1. Proposing 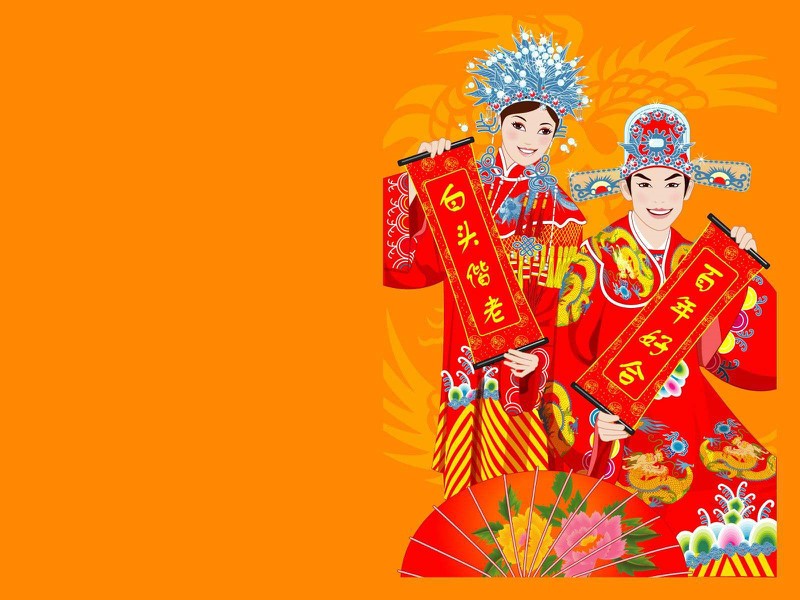 Proposing is the first etiquette in marriage and is the first members in the two families. Thus, it is very important. Using a common expression, it is making an offer of marriage to another family on behalf of the son or daughter.
If the parents thought that the girl could be the daughter-in-law in old times, they would ask a matchmaker for sending the gifts and bring the son and the girl together. If the girl’s parents also agreed on the marriage, they would accept the gifts. People usually used a wild goose when sending the gifts. Because the wild goose could fly to the south or the north according to the season and they would never change it implied the woman would be punctual and also because when the goose flied they were in a row and when they stopped they were in a line which implied that the women should comply with the marriage rules and arrange in order that one should not breach it.
2. Asking the name 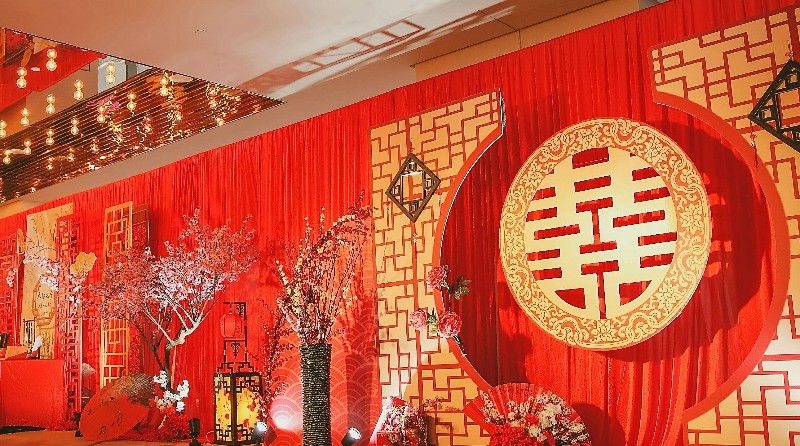 It aims to ask for girl’s name and pray.
In ancient times the girl’s name would not be known by other people until the girl was in an age of marriage.
First, one must have the matchmaker and inform of the man’s family through a card. And the man’s family would lastly receipt for postal remittance. Thus it can be seen that which not only meant that the man’s family wanted to know the girl’s name, but also wrote down the woman’s birthday and Eight-characters. If the birthday and Eight-characters were not harm the man, the man’s family would lastly receipt for postal remittance.
In traditional Chinese marriage, people believed “behest of the parents and proposal of a matchmaker”. That is why many marriages in the past were arranged by parents and matchmaker. Matchmaker’s proposal was the marriage’s valid basis in China.
3. Asking for fortune 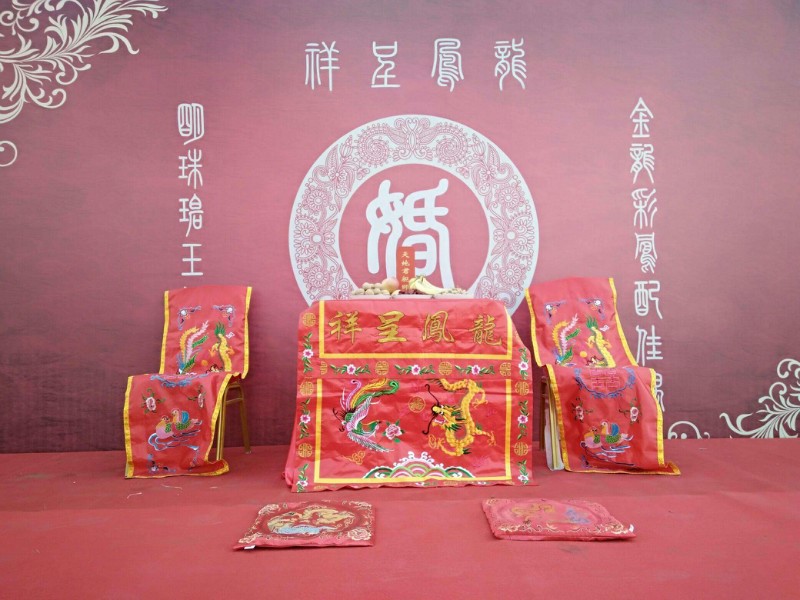 After asking the name, the bridegroom’s side had got the woman’s birthday and Eight-characters and they went to consult a fortune-teller then which was called “asking for fortune”. It included two aspects of contents. One was consulting the female virtues. Ancient people regarded female virtues as the most important one in the gospel of three obedience that were obedience to one’s father before marriage, to one’s husband after marriage, and to one’s son after one’s husband’s death and four virtues that was morality, proper speech, modest manner, and diligent work for a woman according to Confucian ethics.
The other one was consulting good or bad luck. If they were not fit for each other in Eight-characters according to the birthday and what’s more, the woman would harm the man, the result was that this marriage would not be held and would be cancelled. If the result was fit each other and moreover the woman would make the man prosperous, the man’s side would inform the woman’s side through the matchmaker and send the betrothal gifts and exchange cards. Thus the marriage was actually decided to be held.
4. Sending betrothal presents to the girl’s family 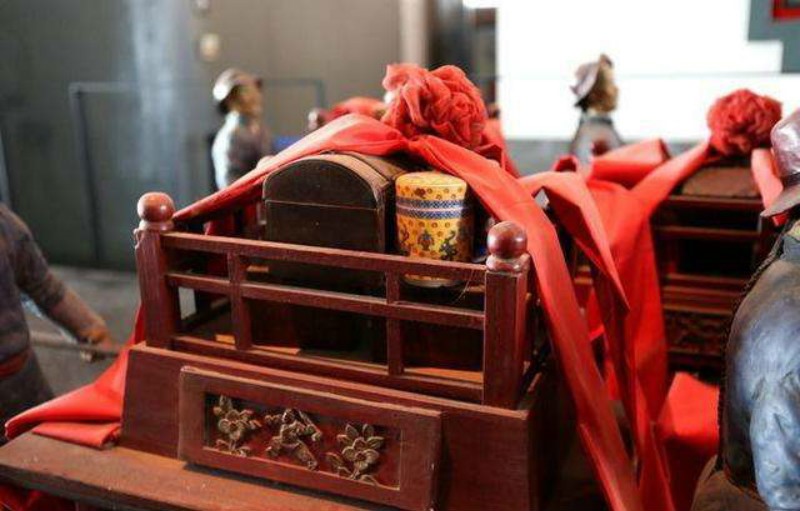 The book propriety and ceremony wrote by the scholars in Han dynasty regards it as sending money. If there is no receipt of gifts, there is no marriage. Hence whether receipt the gifts or not is the implication of the agreement of the marriage by the woman’s side.
The significance of it includes two aspects of meaning. One is the thanks for the woman’s parents because the parents feed up her. The other is help the woman’s family prepare for dowry.
5. Discussing the date of marriage 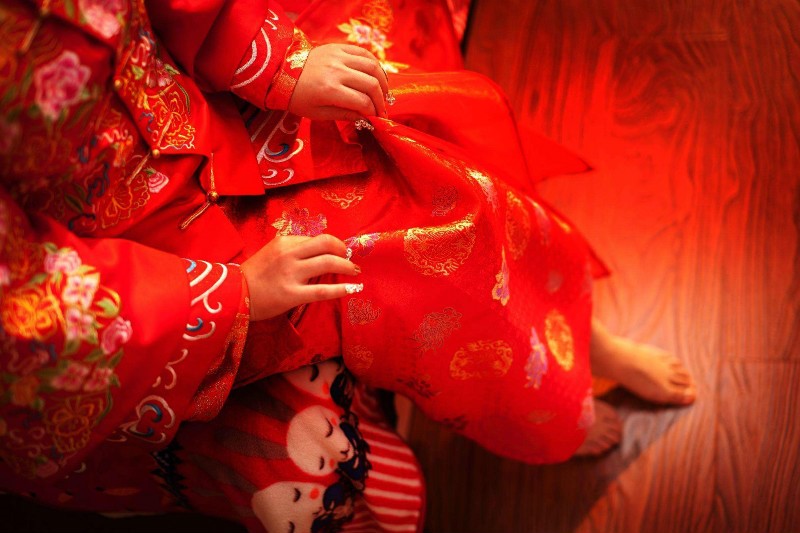 In the past, the bridegroom’s side decided lucky day and sent the matchmaker to inform of the woman’s family. People paid much attention to the marriage time. They usually had a person looked at the almanac or asked for fortune. They liked having marriage in spring or autumn because spring was the time that everything comes back to life and time when spring was changing into summer and was favor to pregnant with new life; autumn was the season of harvest. After the labor for a year, people had enough money to hold the marriage.
Nowadays, it is also an important event. People pay many attentions to it.
6. Meeting the bride 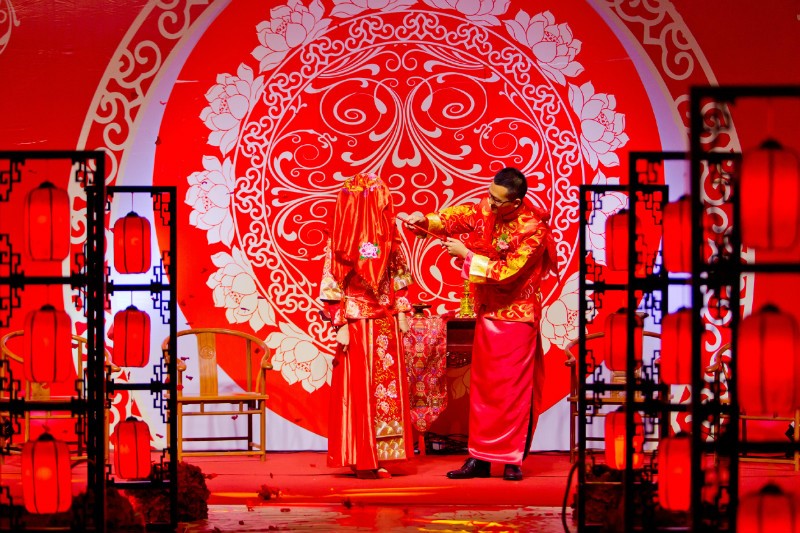