Home /Ming Dynasty and Qing Dynasty
Ming Dynasty
Ming dynasty is a Chinese dynasty that lasted from 1368 to 1644 and provided an interval of native Chinese rule between eras of Mongol and Manchu dominance, respectively. During the Ming period, China exerted immense cultural and political influence on East Asia and the Turks to the west, as well as on Vietnam and Myanmar to the south. 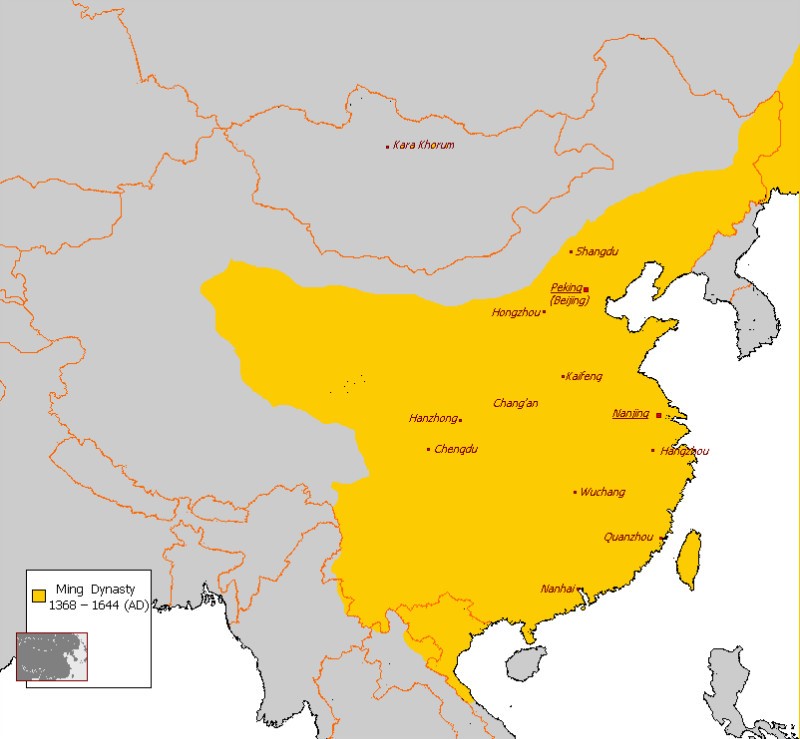 Economy
Economically, the Ming Dynasty was a period during which the feudal society began to show the declining trend while the capitalism started to originate.
Although the territory covered by the Ming Dynasty was smaller than that of the Yuan, during its peak rulers governed over the Mongols in the north, present-day Xinjiang in the northwest, the Western Regions, Tibet and the Nvzhen tribe in the north-east. Due to its great size, the country attracted the interest of many foreign delegations and parties. Meanwhile, the government assigned a man named Zheng He (1371 - 1433) to make numerous lengthily voyages to countries in Southeast Asia, the Indian Ocean (the Red Sea area) and the east coast of Africa. The unprecedented-scope of these voyages greatly increased the Ming's influence abroad and made Zheng He the forerunning figure in seafaring history. 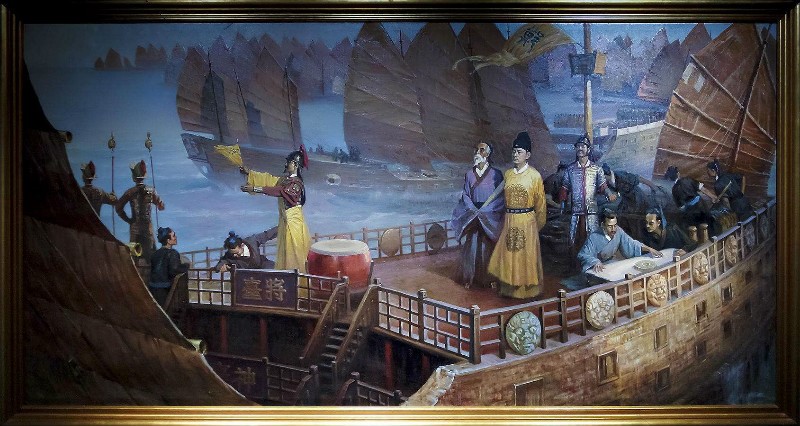 In agriculture, both the food output and the implements of production surpassed that of the Song and Yuan Dynasties. From the early period, the handicraft industry in the southern areas developed rapidly. Especially, the porcelain making industry reached an unprecedented level. Since the reign of Zhu Yuanzhang, it had been a major source of the state finance. The currently famous Jindezhen kiln was once the imperial kiln in that period.
Cultural Achievements
Despite the many foreign contacts made during the Ming period, cultural developments were characterized by a generally conservative and inward-looking attitude. Ming architecture is largely undistinguished with the Forbidden City, a palace complex built in Beijing in the 15th century by the Yongle emperor (and subsequently enlarged and rebuilt), its main representative. 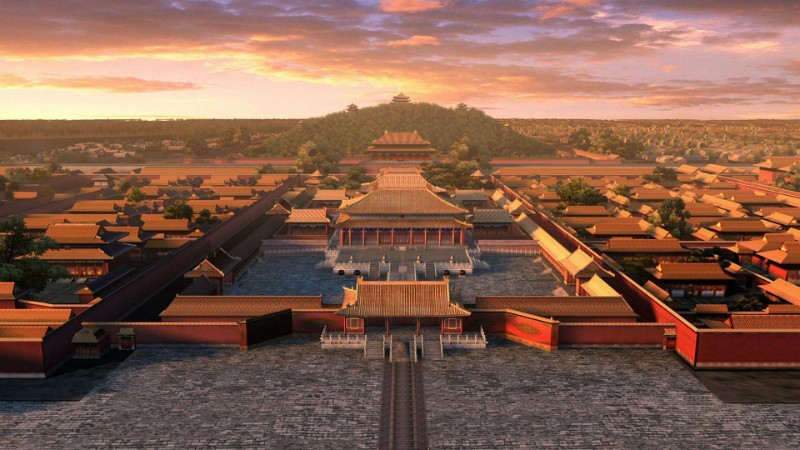 There were many new developments in ceramics, along with the continuation of established traditions. Three major types of decoration emerged: monochromatic glazes, including celadon, red, green, and yellow; underglaze copper red and cobalt blue; and overglaze, or enamel painting, sometimes combined with underglaze blue. The latter, often called “blue and white,” was imitated in Vietnam, Japan, and, from the 17th century, in Europe. Much of this porcelain was produced in the huge factory at Jingdezhen in present-day Jiangsu province. One of the period’s most-influential wares was the stoneware of Yixing in Jiangsu province, which was exported in the 17th century to the West, where it was known as boccaro ware and imitated by such factories as Meissen. 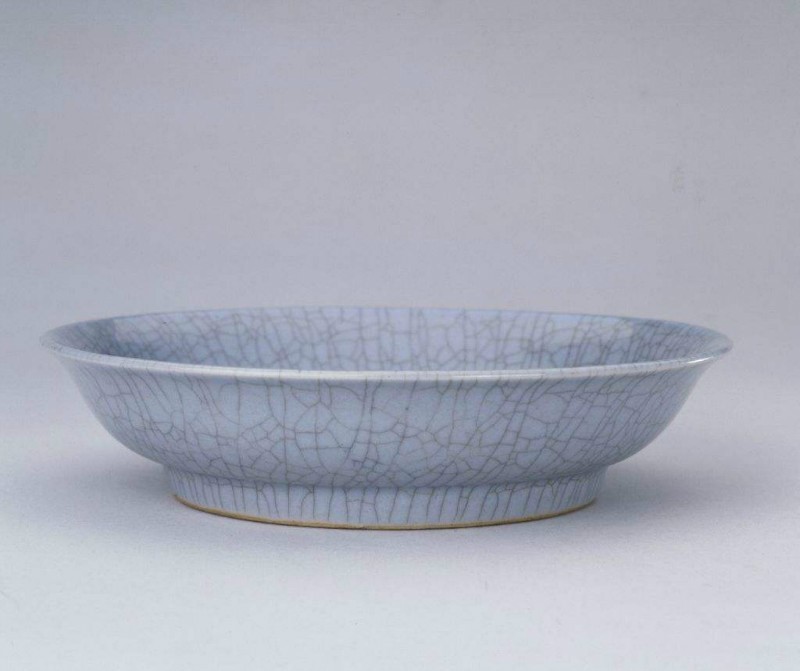 The Ming regime restored the former literary examinations for public office, which pleased the literary world, dominated by Southerners. In their own writing the Ming sought a return to classical prose and poetry styles and, as a result, produced writings that were imitative and generally of little consequence. Writers of vernacular literature, however, made real contributions, especially in novels and drama. Chinese traditional drama originating in the Song dynasty had been banned by the Mongols but survived underground in the South, and in the Ming era it was restored. This was chuanqi, a form of musical theatre with numerous scenes and contemporary plots. What emerged was kunqu style, less bombastic in song and accompaniment than other popular theatre. Under the Ming it enjoyed great popularity, indeed outlasting the dynasty by a century or more. It was adapted into a full-length opera form, which, although still performed today, was gradually replaced in popularity by jingxi (Peking opera) during the Qing dynasty. 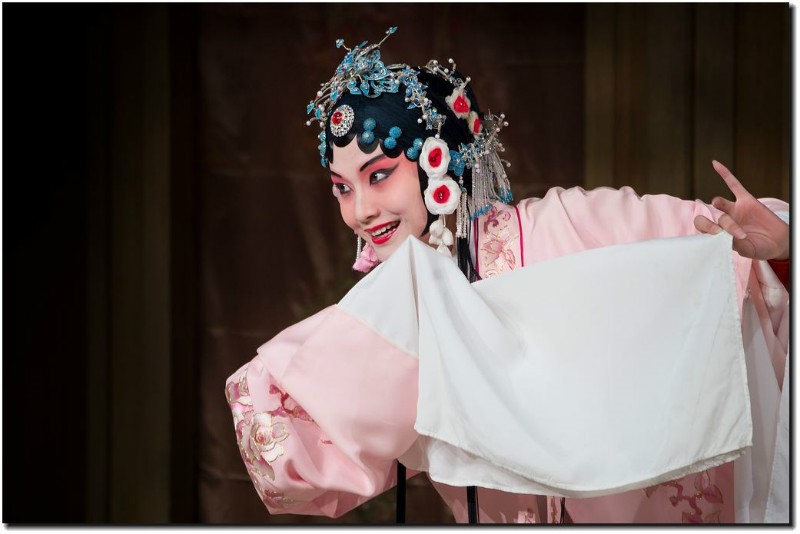 Science
Before the 16th century, the scientific development of the Ming Dynasty had been in the forefront of the world.Many scientific books appeared in the early and middle period, namely, medical book Compendium of Materia Medica by Li Shizhen, Song Yingxing's Heavenly Creations about handicraft industry, Xu Guangqi's Complete Treatise on Agriculture and Xu Xiake's Travels of Xu Xiake. All these have been the precious documents for today's study of the ancient technology. Additionally, the military technology was relatively advanced in that period. A kind of gun called 'huochong gun' and powerful artillery were invented in the late period. It is said that a man named Wan Hoo even tried to fly to the sky by sitting in a chair propelled by gunpowder sticks. Unfortunately, he failed and became the first sacrifice in human conquest of the sky. 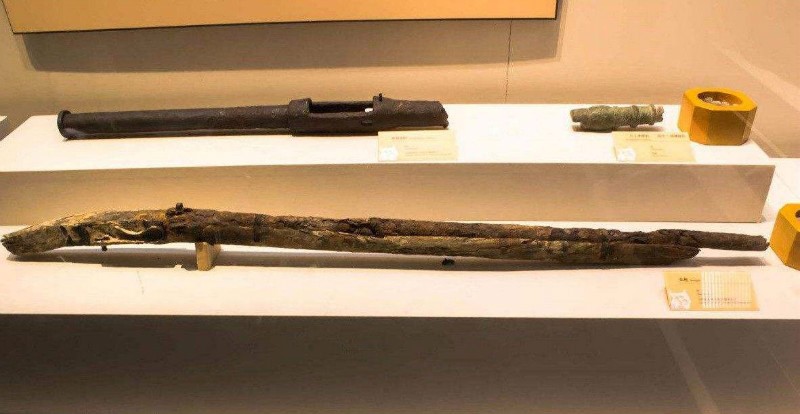 In the end, the greatest achievements accomplished during this time were on architecture. The Forbidden City in Beijing was crafted this time. Porcelain making was also relevant during this time, which contributed to arts of present day.

Qing Dynasty
The Qing Dynasty (1644–1912) was the last Chinese dynasty, and the longest dynasty ruled by foreigners (the Manchus from Manchuria, northeast of the Great Wall).The Qing Dynasty had the most overseas contact, though it was mostly resisted. China glories in the prosperity of the Qing Golden Age, but remembers with shame the forced trade and unequal treaties later in the Qing era. 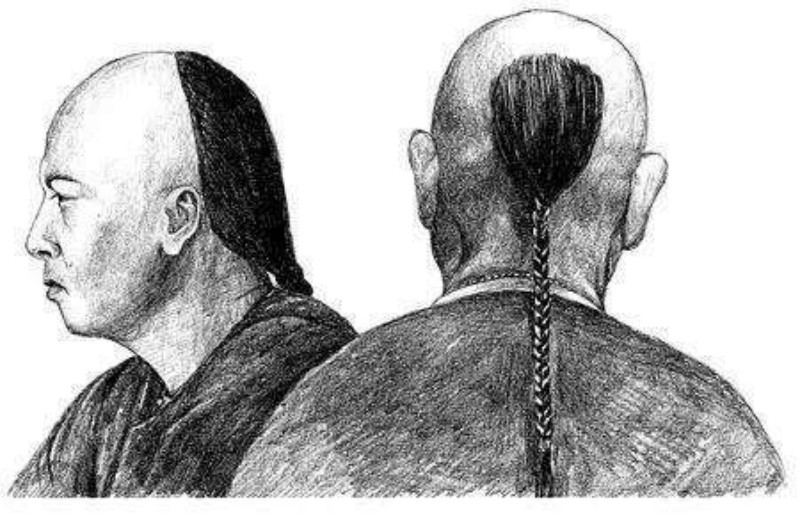 Cultural Achievements
Social mores became more conservative during the Qing reign, with worsened penalties for homosexuals. Increased demand for purity in women led to a mass refusal of men to accept widows as their brides. This led to significant growth in suicides of widows, and the creation of homes for widows where interaction with men was limited. 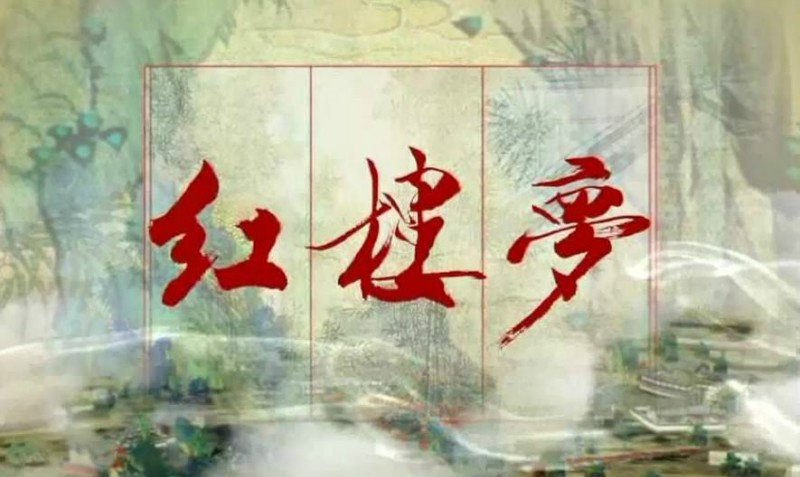 Books were routinely banned, and theaters shut down.Despite this oppressive atmosphere, some creative work did gather attention, as with the poetry of Yuan Mei and Cao Xueqin’s novel Dream of the Red Chamber.Painting also managed to thrive. Former Ming clan members Zhu Da and Shi Tao became monks to escape governmental roles in Qing rule and became painters. Zhu Da embraced silence as he wandered across China and his depictions of nature and landscapes are imbued with manic energy. Shi Tao is considered an artistic rule-breaker, with Impressionist-style brush strokes and presentations that predated Surrealism.

Opium Wars
The 19th century featured several military confrontations between China and the western world, the Opium War of 1840 being the first. A two-year conflict, it pitted China against Great Britain. 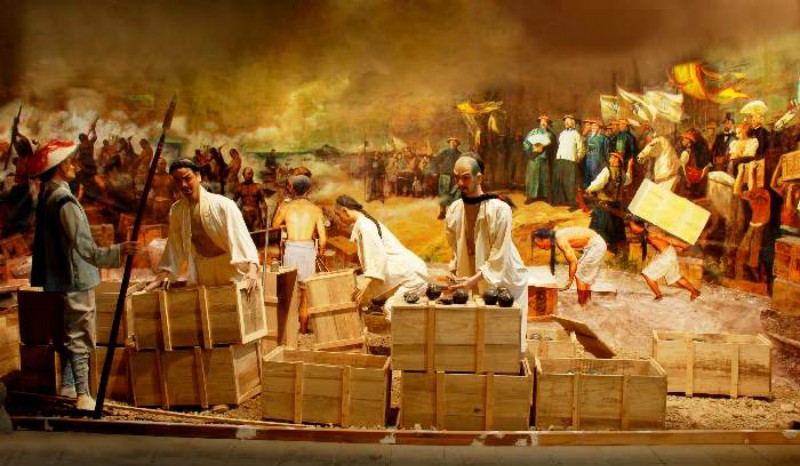 Opium was used medicinally in China for centuries, but by the 18th century it was popular recreationally. Following its conquest of India, Britain cultivated and exported opium to China, flooding the country with the drug. An addiction crisis followed. A ban was attempted, and smoking opium outlawed, but British traders worked with black marketers to bypass laws. Military confrontation became likely, and soon British forces shut down Chinese ports. Among many concessions during negotiations, China was forced to give up Hong Kong to the British. 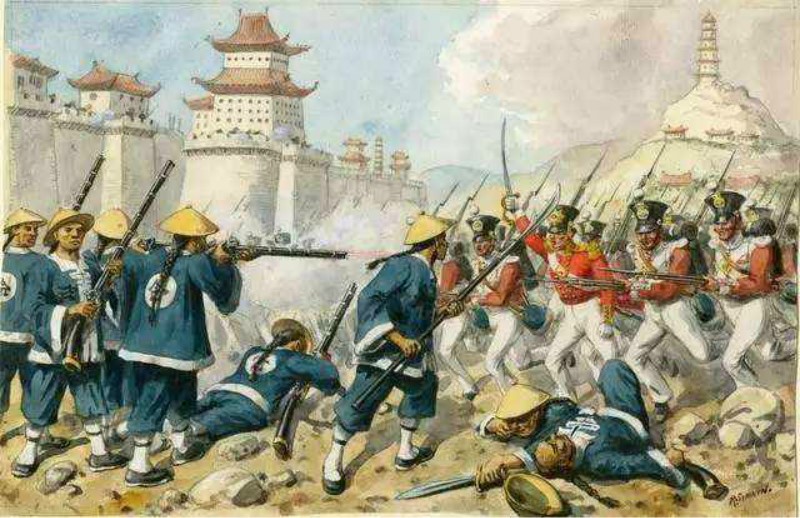 A second Opium War was waged from 1856 to 1860 against the British and the French, bringing more unequal agreements.Christian missionaries were allowed to flood the country, and western businessmen were free to open factories there. Ports were leased to foreign powers, allowing them to operate within China according to their own laws, and opium addiction rose. 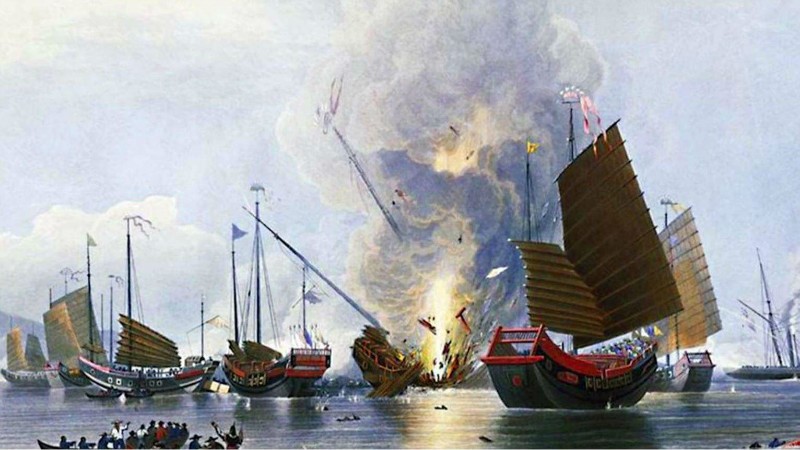 Fall of the Qing Dynasty
The Qing Dynasty fell in 1911, overthrown by a revolution brewing since 1894, when western-educated revolutionary Sun Zhongshan formed the Revive China Society in Hawaii, then Hong Kong. 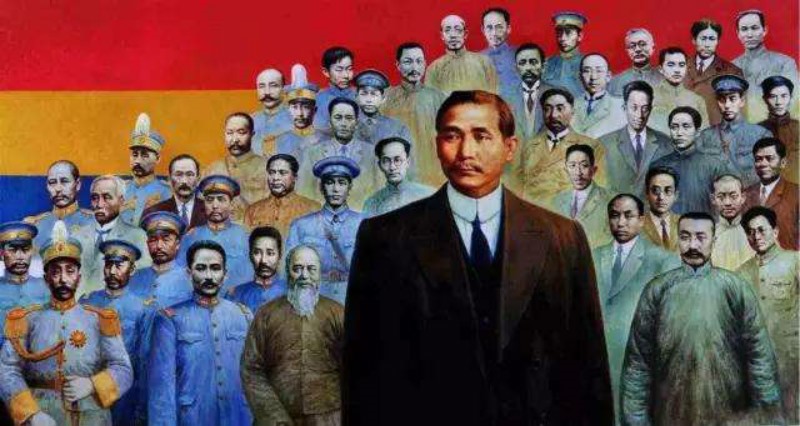 In 1905, Sun united various revolutionary factions into one party with Japanese help and wrote the manifesto, the Three Principles of the People.
In 1911, the Nationalist Party of China held an uprising in Wuchang, helped by Qing soldiers, and 15 provinces declared their independence from the empire. Within weeks the Qing court agreed to the creation of a republic with its top general, Yuan Shikai, as president.
Xuantog abdicated in 1912, with Sun creating a provisional constitution for the new country, which ushered in years of political unrest centered around Yuan.
In 1917, there was a brief attempt to reinstate the Qing government, with Xuantog being restored for less than two weeks during a military coup that ultimately failed.