With more than 50,000 rivers, China abounds in rivers. Almost all large rivers in China belong to the exterior river system, which directly or indirectly emptying into the seas. Because China's terrain is high in the west and low in the east, most of its rivers flow east and empty into the Pacific Ocean, including the Yangtze, Yellow, Heilong, Pearl, Liaohe and Haihe rivers.They are also the most famous and important rivers of this country that have made great contributions to the country on economic or travel interests.

Yangtze River (Changjiang, 长江)
Any China tour cannot be complete without a Yangtze River cruise, which is a vacation within your fast-paced China land trip. The Yangtze River is the longest river in China, the third longest in the world. It originates from the snow-capped Geladandong—the main peak of Tanggula Mountains of the Qinghai and Tibet plateau, flows through Qinghai, Tibet, Yunnan, Sichuan, Hubei, Hunan, Jiangxi, Anhui and Jiangsu, and finally enters into the East China Sea in Shanghai. The 6300-kilometer-long Yangtze River has eight major tributaries and a catchment area of 1.8 million square kilometers, which equivalent to 1/5 of the total land of China.

Yangtze River Cruise has become a must-do activity when visitors visit China. The Yangtze River winds its way through high mountains and deep valleys with many tributaries. The cruise always includes a variety of exciting shore excursions to local riverside villages and historic sites. The highlights of the Yangtze River are the magnificent Three Gorges and the famous Three Gorges Dam. 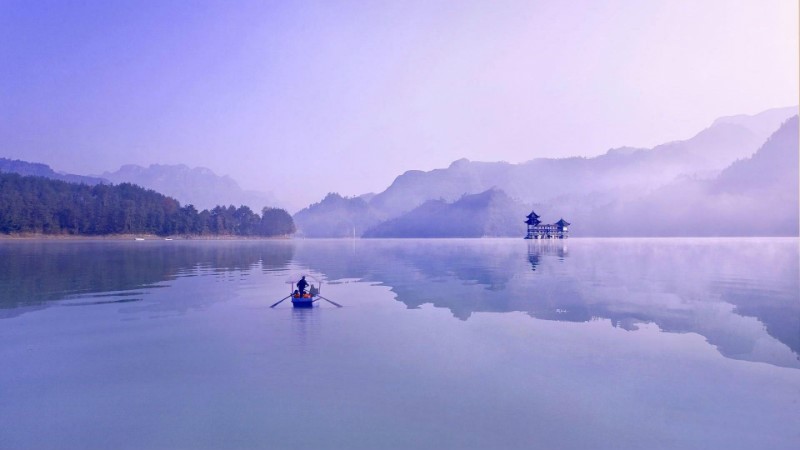 Yellow River (Huanghe, 黄河)
The Yellow River, with a total length of 5,464 kilometers, is the second longest river in China. The Yellow River is the birthplace of ancient Chinese culture and the cradle of Chinese Civilization. It is originated from the Bayanhar Mountain Range in Qinghai Province, meandering across 9 provinces and finally emptying into the Bohai Sea at Kenli of Shandong Province. 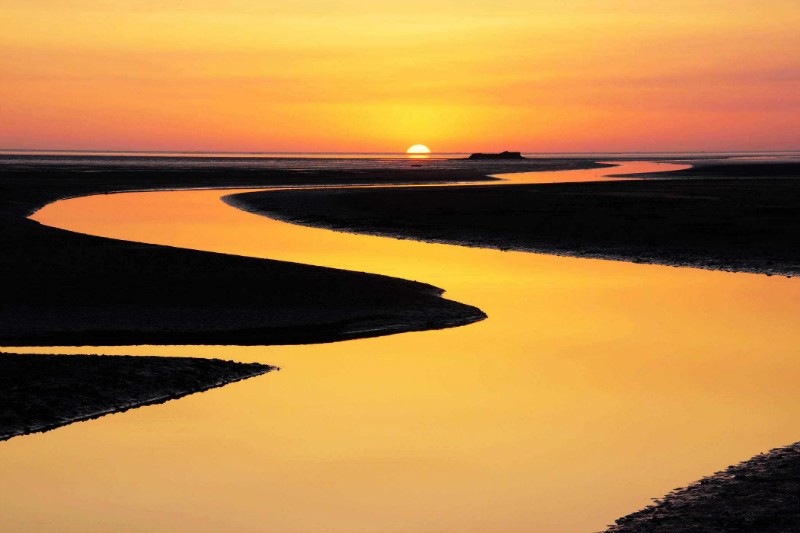 Heilongjiang River (Heilongjiang, 黑龙江)
It rises in the hills of western Manchuria at the confluence of its two major affluents, the Shilka River and the Ergune River, at an elevation of 303 meters, running 4,370 meters into Okhotsk Sea bypassing the Tatarskiy Proliv. As it flows through China, Mongolia and Russia, it can be called an "international river". Within the river basin, there are abundant mineral resources and fish stocks, especially Salmon and Huang Fish. 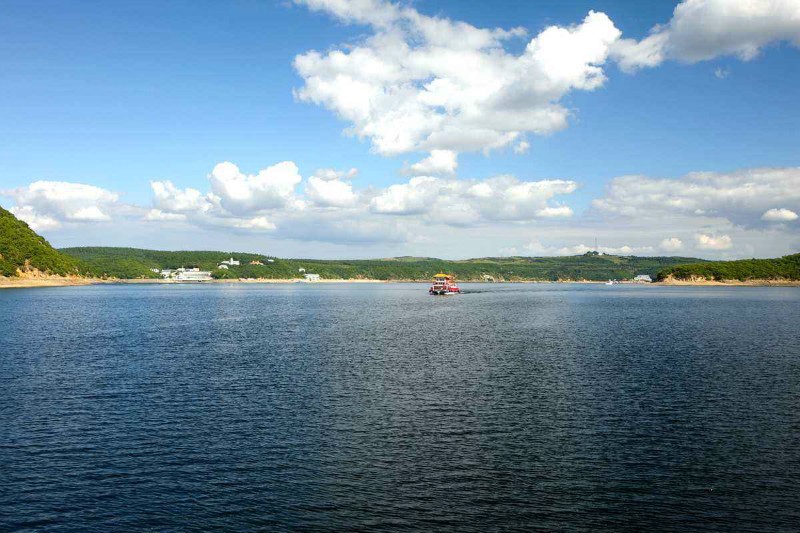 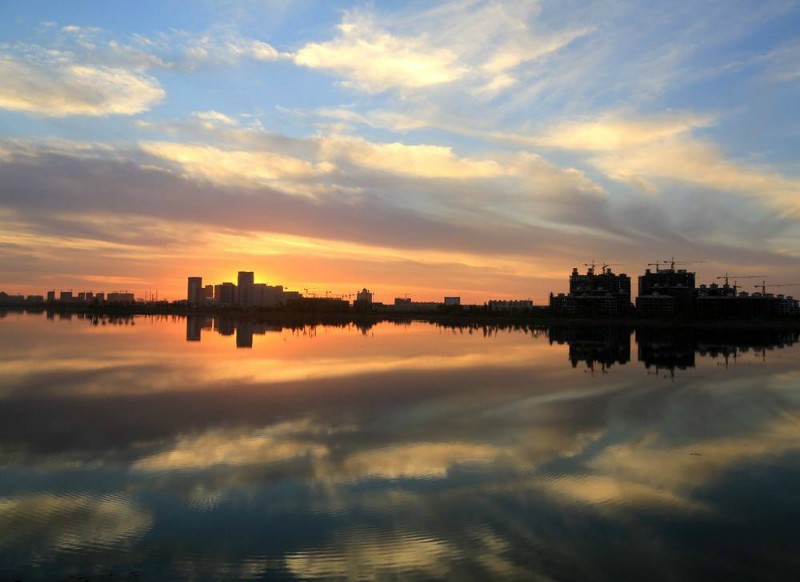 Zhujiang River (the Pearl River, 珠江)
The Zhujiang is the third longest river in China (2,200 km, after the Yangtze River and the Yellow River), and second largest by volume (after the Yangtze). It is the largest river in south China, flowing into the South China Sea between Hong Kong and Macau. Its lower reach forms the Pearl River Delta. The Pearl River is formed by convergence of three rivers---the Xijiang, Beijiang and Dongjaing. The river flows through the majority of Guangdong, Guangxi, Yunnan, and Guizhou Provinces, and parts of Hunan and Jiangxi, forming the 409,480 km² Pearl River Basin, which has a network of rivers, fertile soil, abundant natural resources and a sense population.The annual rainfall of the region is around 1,000 mm, thus Pearl River enjoys about 336 billion cubic meters total flow a year. 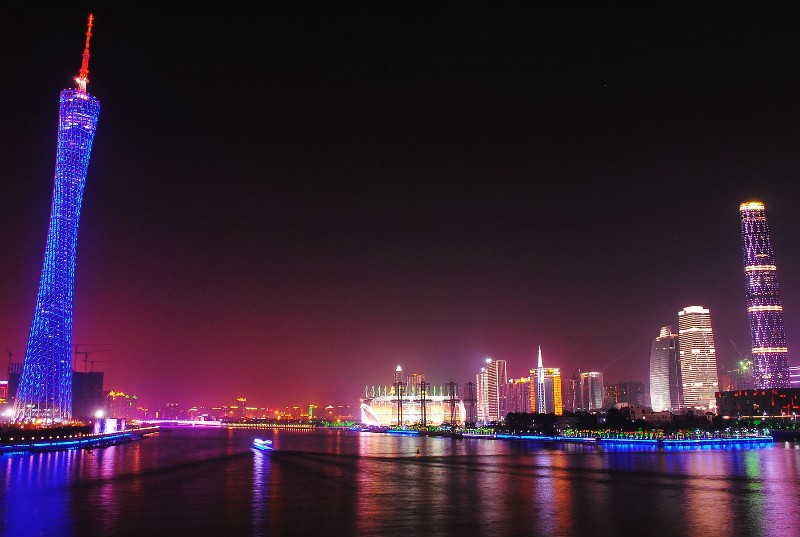 Lancang River(Lancang Jiang, 澜沧江)
The Lancang River, also known as the Mekong River, is the longest river in the Southeast Asia, with a total length of 2,354 kilometers. Flowing through Qinghai, Tibet and Yunnan, it leaves China bypassing the Mengla County of Xishuangbanna Autonomous Prefecture, Yunnan. Its total length is 4350km. Owning to the unique climate and geographical conditions, the Lanchang-Mekong River enjoys rich fish stocks and is known as the world's most abundant freshwater fish ecological system. The Lancang River runs south until it leaves China at the Nanla Bayout of Yunnan Province and there from changes its name from the Lancang River to the Mekong River. The river finally empties into the Pacific Ocean in the south of Vietnam. The Lancang River is China's main artery of water carriage connecting Southeast Asian countries, and it is reputed as the "Danube of the East". The Lancang River is a fantastic river with more than ten ethnic minorities living along the river. The ethical cultures and customs are special and the scenic spots and historical sites are numerous. 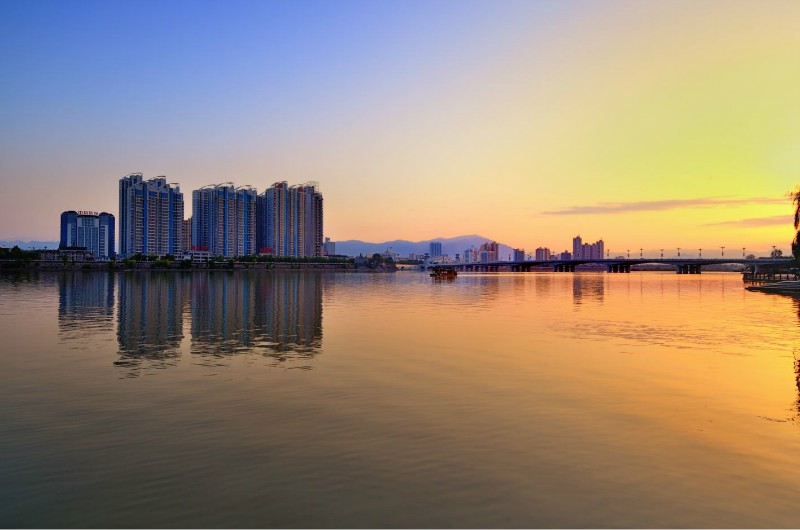 Brahmaputra River (Yaluzangbujiang, 雅鲁藏布江)
The Brahmaputra is a trans-boundary river and one of the major rivers of Asia. From its headsprings in the Tibet Autonomous Region of China, the Brahmaputra River flows first east and then south into the Indian Ocean. About 1,800 miles (2,900 km) long, the Brahmaputra boasts the Brahmaputra Grand Canyon, the largest canyon in the world, 504.6 km long and 6,009 m deep. The river is an important source for irrigation and transportation. 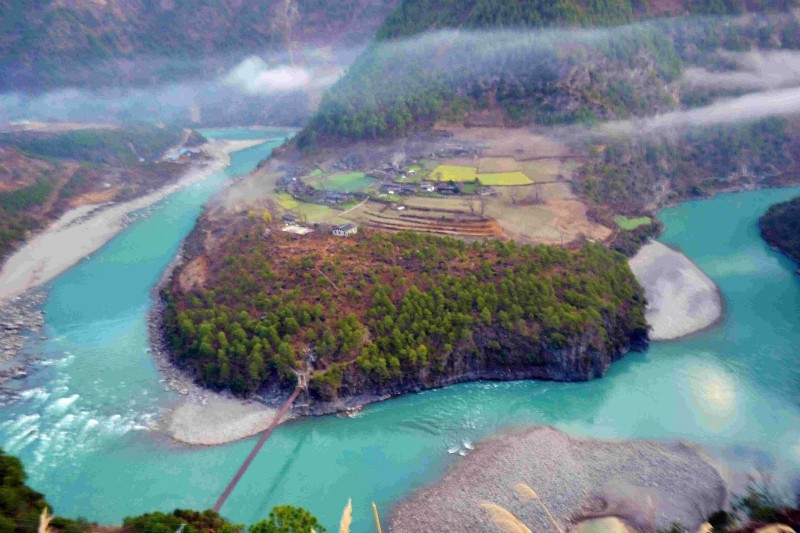 Nujiang River (Nujiang, 怒江)
Nujiang River is the name we call Salween River that runs within China’s area. With a total length about 2,013 km, Nujiang River rises from the southern slope of the Tanggula Mountain Range in Tibet, it runs through western part of Yunnan, and finally reaches the border of China and Burma. From where, it runs as Salween River for another 1,227 km through Burma till pours into the Andaman Sea in Southeast Asia. 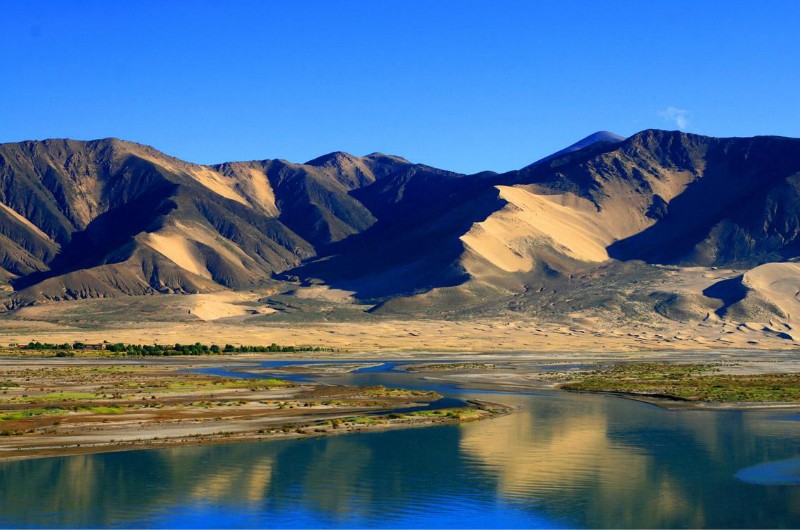 Han River (Han Jiang, 汉江)
Han River or Hanshui River, is the longest tributary of Yangtze River, which rises in Hanzhong City, Shannxi with fine water quality and enjoys abundant rainfall the whole way. With a length of 1532 km, it flows through southern part of Shannxi, and then crosses into Hubei. It merges with the Yangtze at Wuhan in Hubei Province. Its upstream runs through Hanzhong Basin with swift current, is rich in water resource. The Danjiang hydroelectric power station of the upstream built in 1958, is the largest station of the kind in Han River region. The name of the Han kingdom and the later Han Dynasty and subsequently of the China's majority ethnic group apparently derives from this river. 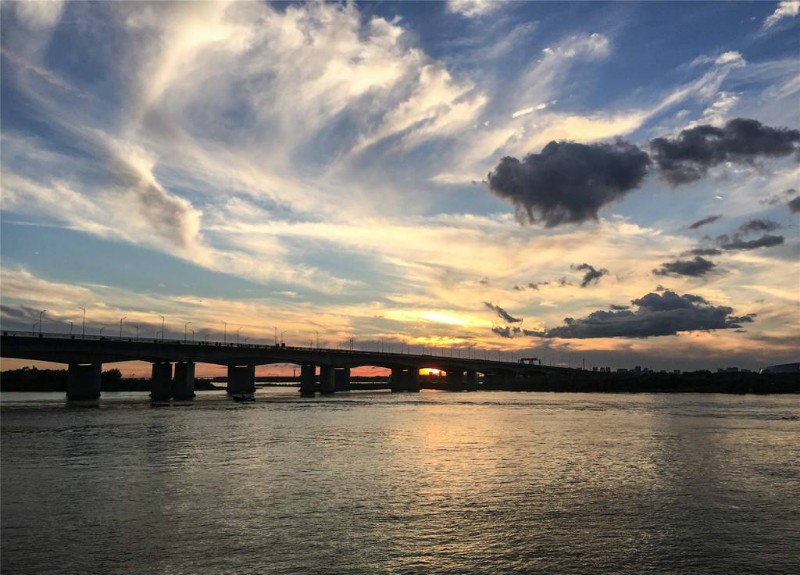 Liao River (Liao He, 辽河)
Being one of the largest rivers in northern China, the Liaohe River is called the Mother River by people in Liaoning Province. Originated in Qilaotu Mountain in Heibei Province, it flows 1,394 kilometers through Hebei, Inner Mongolia, Jilin, and Liaoning provinces, and at last empties into the Bohai Sea, with a drainage area of 201,600 square kilometers. 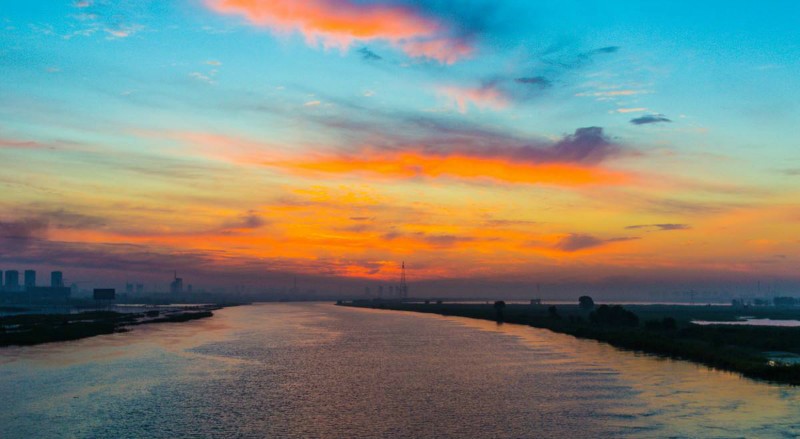