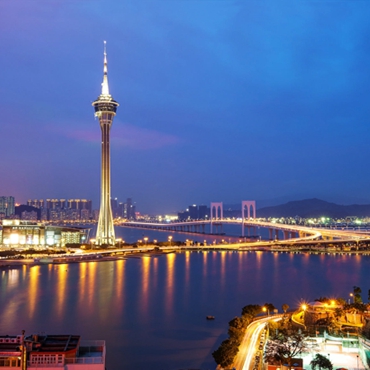 Macau is a city of amazing and fascinating cultural wealth. The unique blend of European and Oriental cultures existing here creates a pleasurable and laid back atmosphere in a truly beautiful city.

You will be picked up at your hotel in Hong Kong in the morning and take a boat to go to Macau. Upon we arrive there, we will firstly visit the [Na Tcha Temple]. This Chinese traditional style temple was built for worshipping Na Tcha (a mythical character). This temple became a World Heritage in 2005.

We then go to the old [City Wall]. This surviving segment of City Wall was built in 1569. It is a remnant of an early Portuguese tradition of constructing defensive walls around their port settlements. This Old City Walls became a World Heritage in 2005.

We will get to know more about Macau’s history and culture from visiting the [Museum of Macau] that exhibits Macau's history, people and culture, emphasizing the bi-culture of the place.

Then next visit will be the [Mount Fortress]. The fortress was Macau's principal military defense structure which was built conjunction with the Jesuits form 1617 to 1626. The fortress covers an area of 10,000 square meters and in the shape of a trapezoid. It became a World Heritage in 2005.

The [Temple of A-ma] was built 400 years ago in homage to a girl who saved seamen's life. Macau was later named by the Portuguese settlers in mid-16th Century. This temple also became a World Heritage in 2005.

Eventually, let’s try our luck to go to a casino! Casinos in Macau offer a large variety of casino games that give versatile entertainment to visitors. There’s no reason to hesitate, it’s just a try!

After all the visits, we will take a ferry back to Hong Kong.