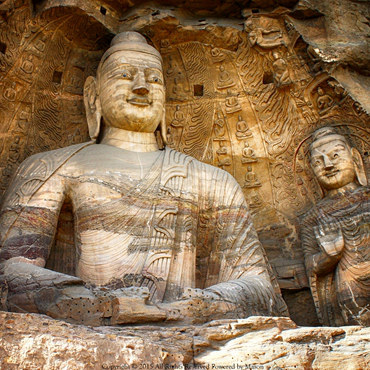 Yungang Grottoes are known as one of the three major Grottoes in China.The Wooden Pagoda is an absolute wooden structure without a single nail used. Plus the Hanging Monastery, these are amazing attractions you should visit.

You will be bet by your guide and driver at your hotel, transferred to Beijing Xi Railway Station and catch the train to Datong. When you arrive in Datong, you will be met by your tour guide and your driver, transfer to your hotel and check in. The rest of the day will be free.

You will be picked up from your hotel after your breakfast. After breakfast, you will be driven to visit [Yungang Caves], In a valley at Yungang, some 16km west of Datong, there are more than 45 recesses dug into the hills and filled with Buddhist statues of various sizes and shapes, 51,000 altogether, later called Yungang Grottoes (Cloud Ridge Caves) listed UNESCO World Heritage in 2001. Then we drive to the [Hanging Temple], 65 km away south-east of Datong. The temple hangs on the west cliff of a hill with over 50 meters above the ground, hence the name Hanging Temple. Hanging Temple was first in 491. The present one was mainly rebuilt and maintained in the Ming Dynasty (1368-1644) and Qing Dynasty (1644-1911). The most distinctive features of the Hanging Temple is the fact that the temple includes Buddhism, Taoism and Confucianism. After lunch, move on to Yingxian County to visit the [Yingxian Wooden Pagoda], the oldest and largest wooden Buddhist pagoda in existence in the world. The pagoda is a 9-story octagonal building with a height of 67 meters. It was built without using any nails. It is admired as one of the “Three Pagoda Wonders” in the world, together with Eiffel Tower in France and leaning Tower of Pisa in Italy. Transferred to the airport for your flight to Beijing in the late afternoon. When you arrive in Beijing, you will be met by your guide and driver, transferred to your hotel in Beijing. Your tour we sponsored ends at the airport with our tour representative.

* Price is in US dollar. It may vary a little bit according to US dollar exchange rate fluctuation, car fuel price change and government tax adjustment, etc.
* The price is only for your reference and  it is subject to seasons, high or low.Please send us your inquiry if you are interested.

A. Entrance fees for the attractions in the square brackets
B. Personal English-speaking Guide to be with you all the way
C. Experienced Driver + comfortable Private car/van/bus
D. Lunch

A. Gratuities, Tips to the guide and driver
(Although not compulsory, if you think your guide and driver have done a good job at the end of the tour, we suggest you tip them at you own decision to show your appreciations.)
B. Other Personal Expenses.