2-day Tour to Nanjing from Shanghai 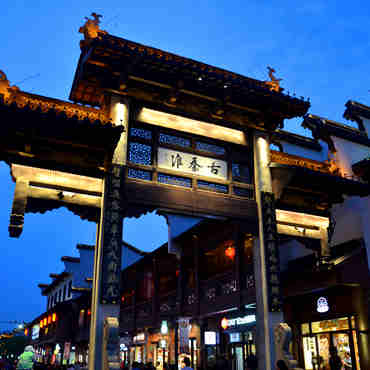 Known as the capital of ten periods in Chinese history, Nanjing is a city famed for its rich culture, long history and beautiful landscape.Trip to Nanjing from Shanghai is easy and convenient.

After breakfast you will be met and transferred to Nanjing to visit [Dr. Sun Yat-sen' Mausoleum]. The Mausoleum of Dr. Sun Yat-sen is situated at the foot of the second peak of Mount Zijin (Purple Mountain) in Nanjing, Jiangsu Province. Construction of the tomb started in January of 1926 and was finished in spring of 1929. The architect was Lu Yanzhi, who died shortly after it was finished.

Reclining on mountain slope, the majestic mausoleum blends the styles of traditional imperial tombs and modern architecture. Lying at the mountainside, the vault is more than 700 hundred meters away from the paifang on the square below, which is the entrance of the mausoleum. There is a three-tier stone stand on which a huge bronze ding, an ancient Chinese vessel symbolizing power, perches. To the north of the square, the paifang towers high. Beyond is the 480-meter-long and 50-meter-wide stairway which has 392 stairs, leading to the vault. On both sides, pine, cypress, and gingko trees guard the way. At the end of the stairway is a gate which is 16 meters high and 27 meters wide. The tri-arched marble gate is inscribed with four Chinese characters written by Dr. Sun, "Tian Xia Wei Gong" which means "What is under heaven is for all". Inside of the gate, there is a pavilion in which a 9-meter-high stele is set, which is a memorial monument set by the Kuomintang (KMT). A few stairs up is the sacrificial hall and the vault.

And then we visit [Ming Xiaoling Mausoleum]. The Ming Xiaoling Mausoleum, where Emperor Ming Taizu (respected title of Emperor Zhu Yuanzhang) and his queen were buried, lies at the northern foot of Mount Zijin (Mount Purple Gold), adjacent to Dr. Sun Yat-sen's Mausoleum on the east and Meihua (Chinese Plum) Mountain on the south.

With a more than 22.5 kilometers wall, the mausoleum is the largest emperor mausoleum in Nanjing. Most of its ground wood-structured buildings were destroyed in 1853, with the brick and stone buildings still existent including Rectangular city, Inner Red Gate and Jinyue Tablet.

After that you will take look at the [Confucius Temple] which is for consecrating and worshipping Confucius, the great thingker and educator of ancient China. Nanjing Confucius temple was built in Song Dynasty (A.D.1034) and expanded in East Jin Dynasty. The Confucius Temple once was rebuilt in Qing Dynasty (A.D.1869) but was serious fired and destroyed by the Japanese aggressor troops in 1937. Nowadays it has re-expressed its splendid civilization to the world and has been regarded the special scenery of Nanjing. In 1991, the Confucius Temple was elected the "Forty Best Scenery Spots":.

After all the visits, transfer to the hotel in Nanjing.

We go to visit the [Zhonghua Gate]. Zhonghua Gate (Chinese Gate) is the south gate of Nanjing City, Jiangsu Province. A precious cultural relic, Zhonghua Gate has the double distinction of being the biggest castle-style city gate in China and a structural element of the most complicated castle in the world. It is the castle's magnificent scale, delicate structure, and the great skill with which it was built that bequeath it an important place in China's military and architectural traditions. The [Nanjing Yangtze River Bridge] which is the first bridge to be built across the Yangtze River in Nanjing, China, was completed in 1968 and is the first double-decker, double-track highway and railway bridge designed and constructed by the Chinese without outside engineering assistance. After the withdrawal of Soviet experts following the Sino-Soviet Split, China was thought to be unable to build a bridge on such a scale by themselves, without outside support. The project was undertaken to prove that Chinese engineers were able to overcome this perceived lack of ability.

After all the visits, we transfer back to Shanghai. The two-day Nanjing tour ends when back to your hotel in Shanghai.