Chongqing Museum of Natural History is one of comprehensive natural history museums in china，There are two location for the museum. One is at Loquat Hill in central Yuzhong District, and the other is near Jinyun Mountain in Beibei District. Chongqing Natural History Museum, founded in 1944, was originally known as the Western Museum of China. It was changed to the present name in 1981. It is well-known in China and even the world for the large numbers and great varieties of specimens there. 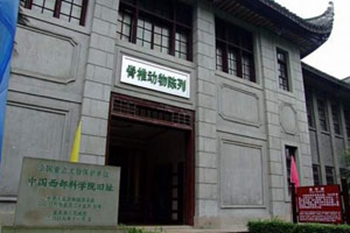 It collects over 80, 000 valuable natural specimens of, for example, animals, plants, ancient living beings, and ancient human being, especially the fossils of dinosaur skeleton, footprint, and eggs. It is well-known in China and even the world for the large numbers and great varieties of specimens there. Over 100 items are very rare. It houses a number of dinosaur skeletons that have been unearthed in Sichuan Province. Most of the remains have been uncovered around the town of Zigong since the 1970s.

The museum has several basic displays, namely, the Display of Sichuan Dinosaur Fossils, the Display of Sichuan Invertebrate, the Display of Biological Evolution, and the Display of Dinosaur Fossils of Abroad Roadshows, etc.The most impressive exhibits at the Chongqing Natural History Museum are the skeletons of the Tuojiang stegosaur and the Omeisaurus Zigongensis dinosaur. Belonging to the Mamenxi dinosaur of the sauropod family, the dinosaur lived in the late Jurassic period about 130 million years ago. According to Zhang Yihong, a research member with the museum, the dinosaur fossil, which is well preserved, is 18 meters long and the height of its back is 3.5 meters, is the largest and the most well-preserved fossil ever discovered in Asia. The Mamenxi dinosaur is named after a dinosaur fossil unearthed in 1957 in Hechuan City, Chongqing Municipality. As a particular dinosaur species that lived in East Asia, the Mamenxi dinosaur bloomed in the late Jurassic period about 150 million years ago and became extinct in the Cretaceous period.

Except for the dinosaur skeletons, the museum has published several books such as Sichuan Jurassic Dinosaurs and Stratums, Stegosaurus, and so on.

The collection has been displayed in Europe, America, Japan, Hong Kong and Taiwan for more than 20 times.