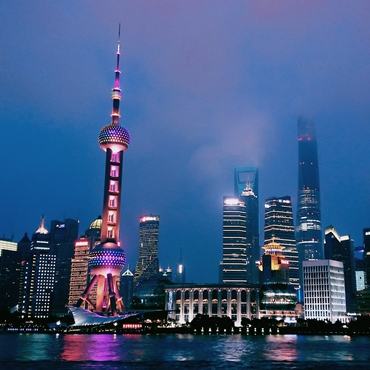 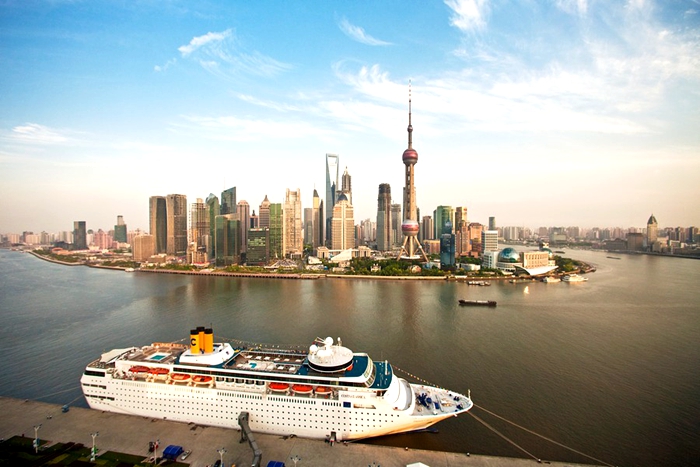 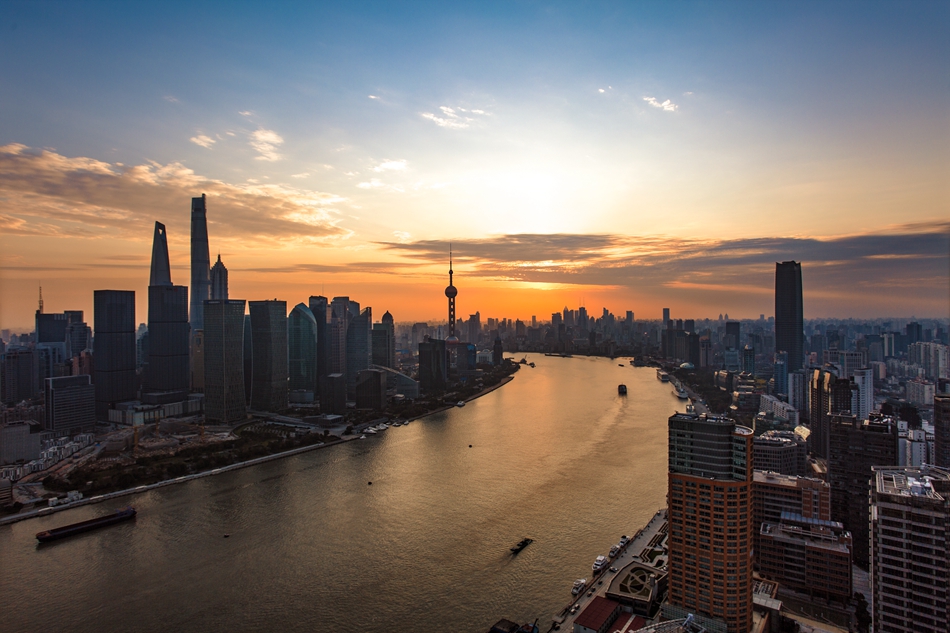 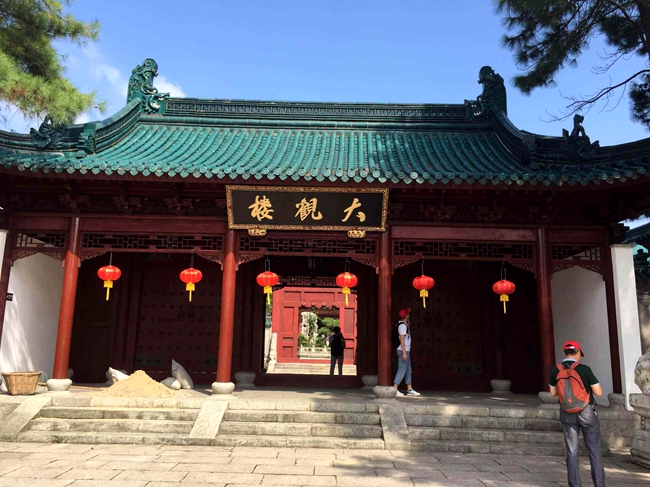 Shanghai Grand View Garden is a classical garden, which was built according to the model that was described in the novel of Dream of Red Mansions. Located by Dianshan Lake-side in Qingpu County in western Shanghai, it is consisted by a dozen groups of scenic constructions, like Daguanlou (Grand View Tower), Xiaoxiangguan (Bamboo Lodge), Yihongyuan (Cheerful Red Court), Hengwuyuan (Lush Grass Court), Daoxiangcun (PAddy-Fragrance Cottage) and so on. These architectures, being either elegant, or simple, or secluded or exquisite, are fully embodying the charm and mood portrayed in the novel. 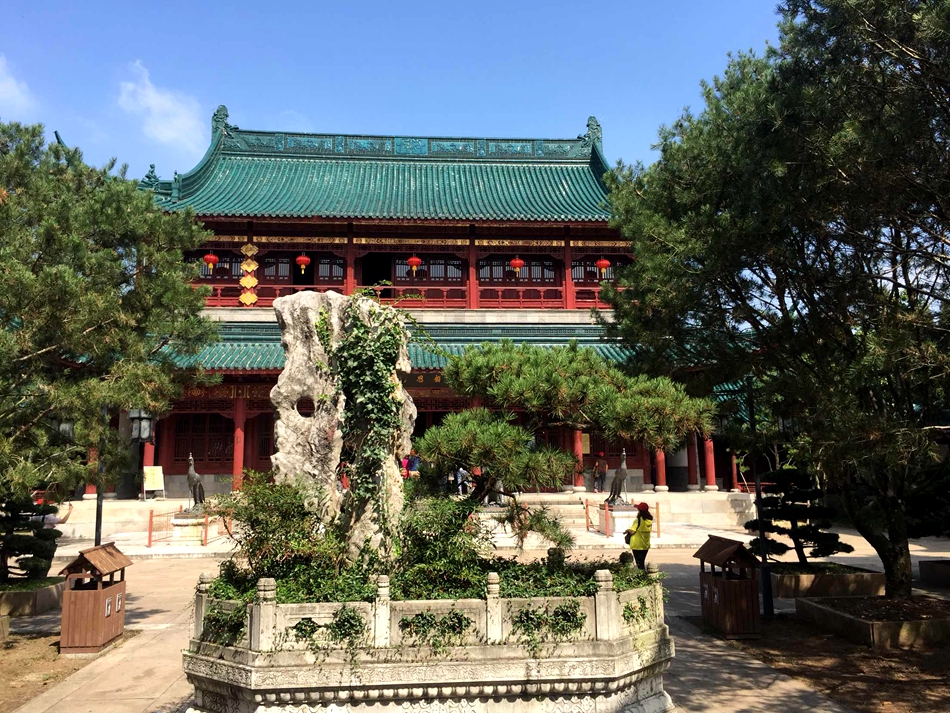 It is said that the imperial concubine, Lady Jia, gave audience to her clansmen in the Grand View Tower when she was going home for a visit. The principal hall is flanked by Hanfang Pavilion and Zhuijin Pavilion connecting each other by a corridor, linking with the two verandas in the fore-court. She was fond of watching the performances on the stage standing on the side. The Gorgeous and magnificent tower matched the imperial palace in grandeur and splendor. 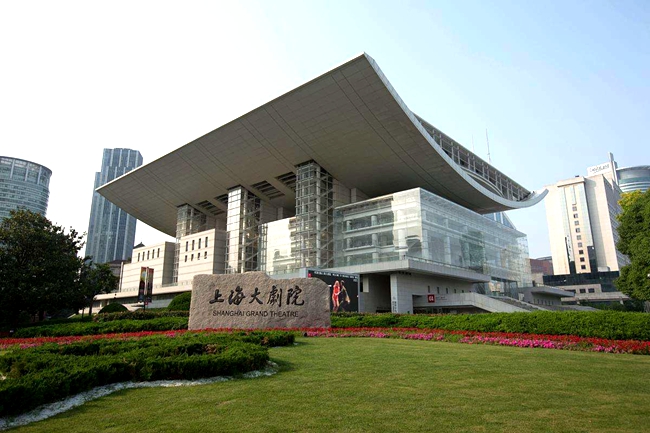 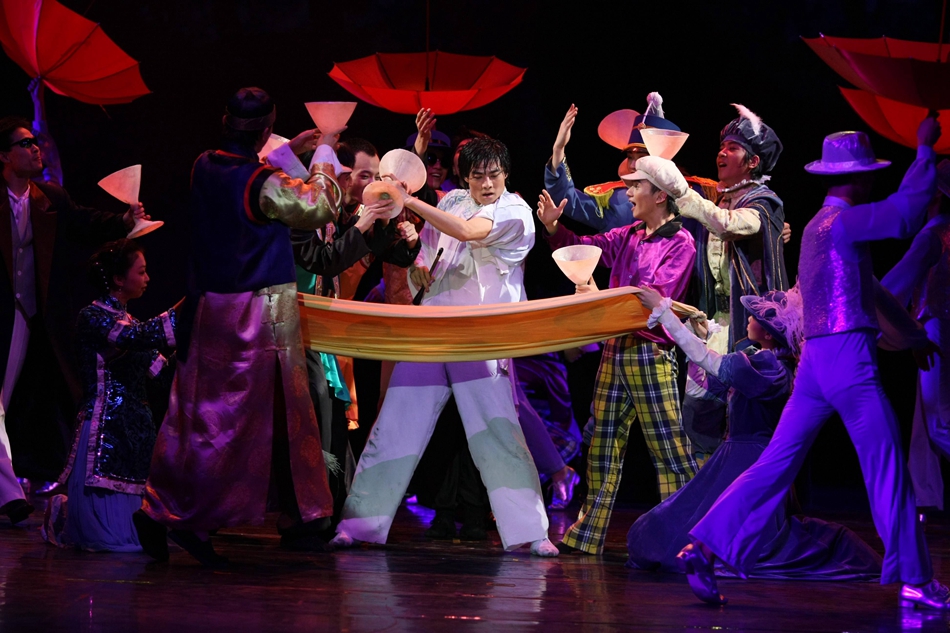 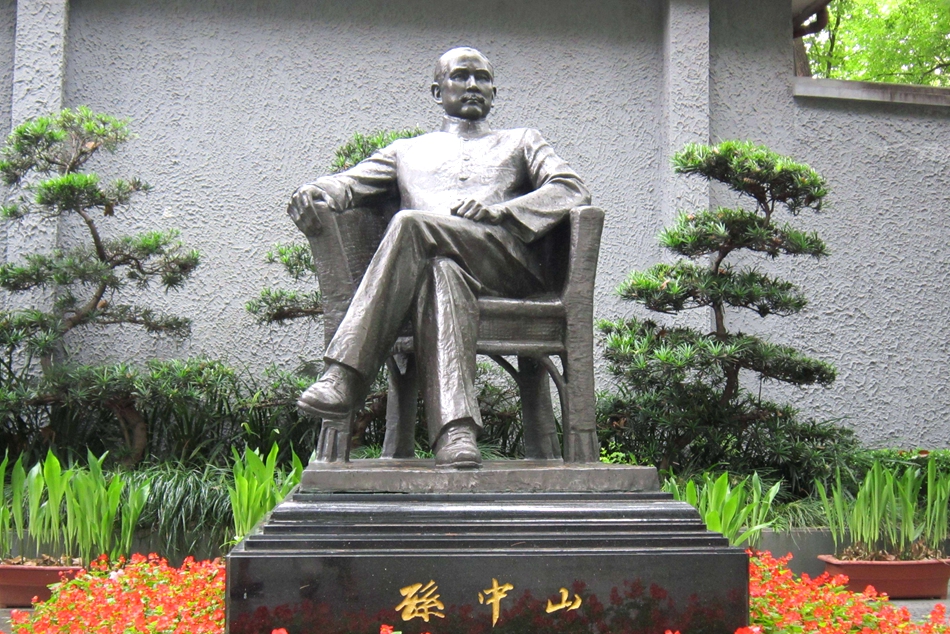 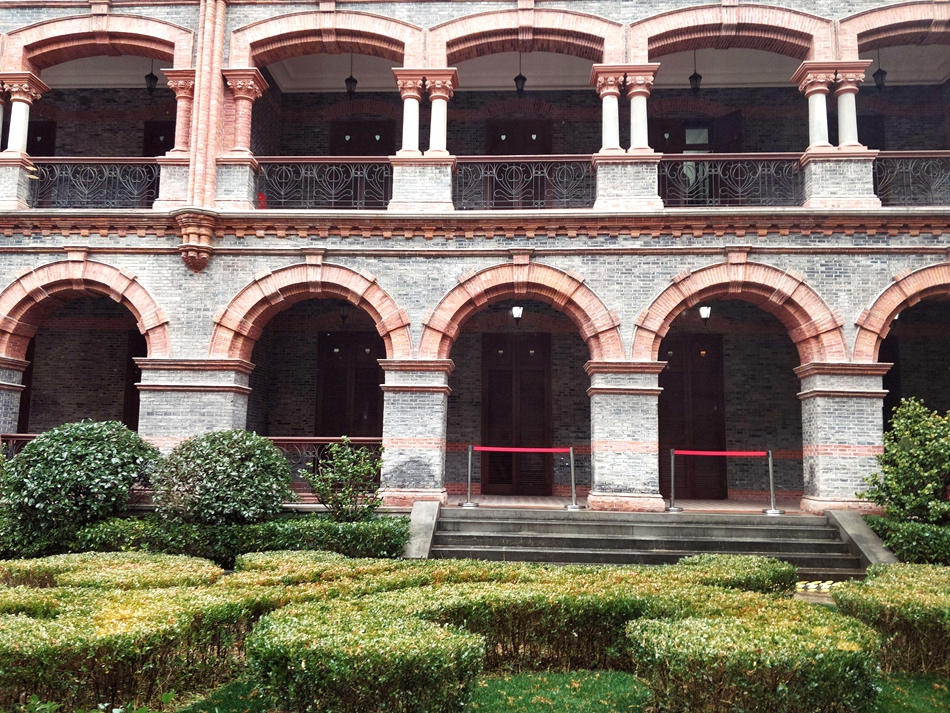 Situated at No.7 on Xiangshan Road, the western-style two-storied building was bought for Dr. Sun Yatsen, sponsored by a Canadian overseas Chinese. You can find a beautiful landscaped garden in front of the building. Entering the house, the dining room and the sitting room are on the first floor and the bed room and the study are on the second floor. This is the house where Dr. Sun Yatsen and his wife Madame Soong Ching Ling lived for 6 years from 1918 to 1924. Many of his important revolutionary activities were conducted here, so were the 'Program for Founding the Republic', 'Theories of Sun Wen' and 'Industrial Program'. On August 1922, in this building, he met representatives from the Central Committee of the communist Party of China Lidazhao and Lin Boqu and consulted with Yue Fei. Under state protection, Dr Sun Yatsen's former residence has been listed as a key cultural relic site. 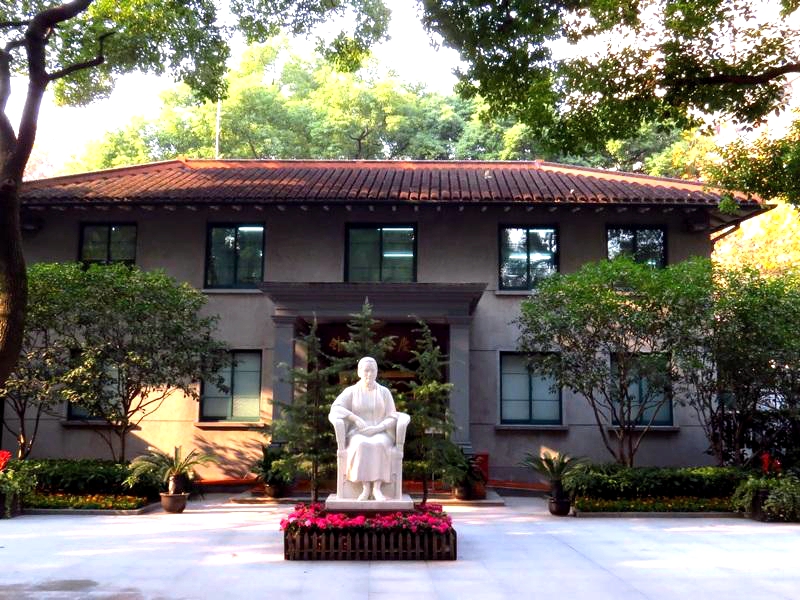 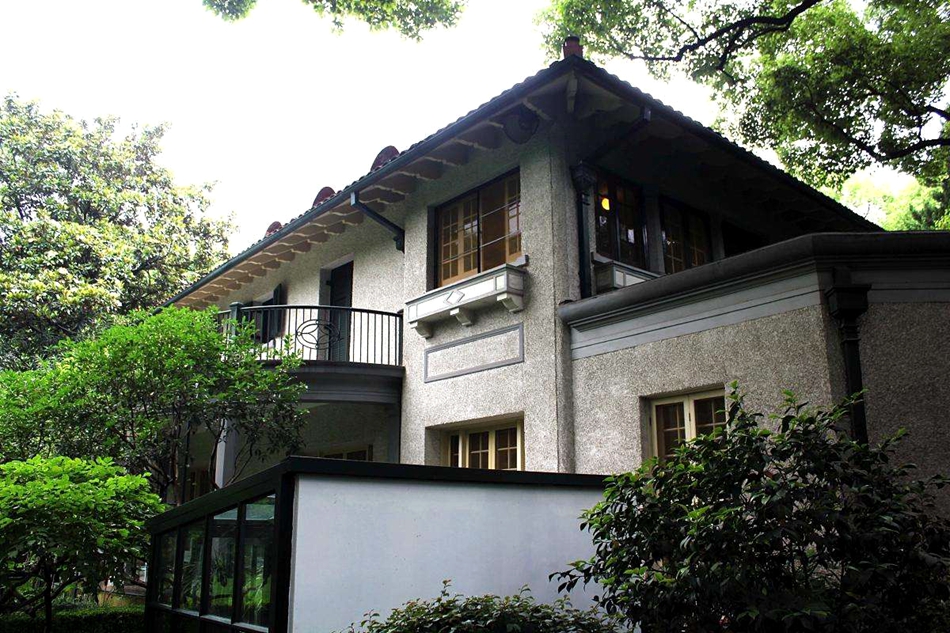 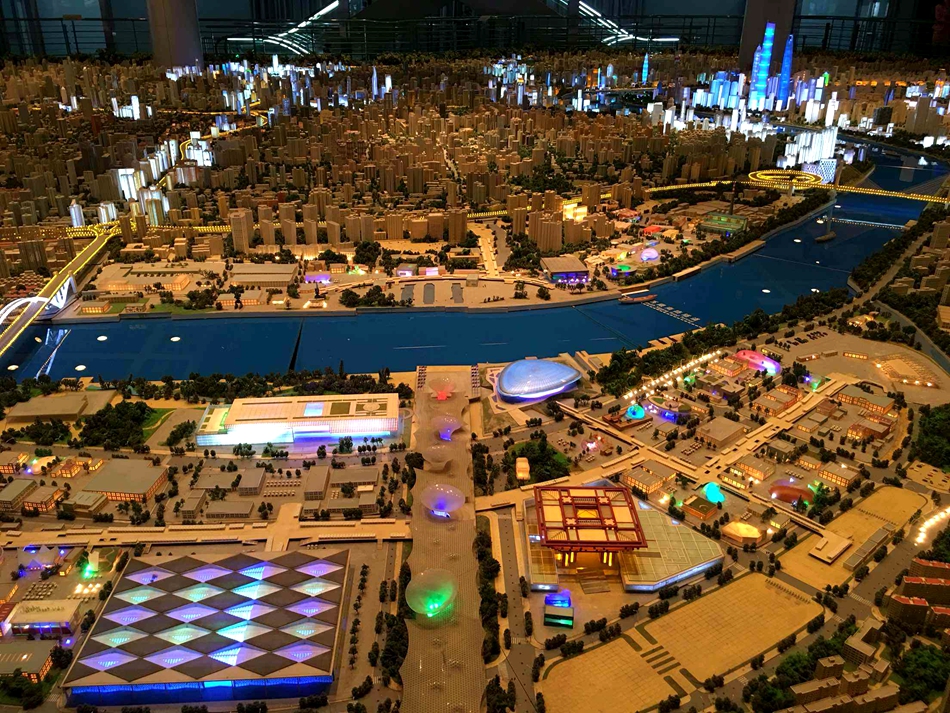 Shanghai City Planning Exhibition Hall is situated in the east of the City Hall. There are four giant steel caps on top of the building, symbolizing the city flower- the magnolia. Glittering in the sunlight, the steel caps offset the crystal palace-like Grand Theater by its side. The building is at a height of 43.3 meters, with 5 stories above ground and 2 stories underground and a total floor space of 18,393 square meters. On one hand, it is available for citizens to comprehend the changes in the city and its future planning from this City Planning Exhibition Hall. On the other hand, it also introduces the planning and construction of Shanghai to visitors. It helps to set Shanghai's image as an international metropolis open to the outside world.

Site of the 1st National Congress of the Communist Party 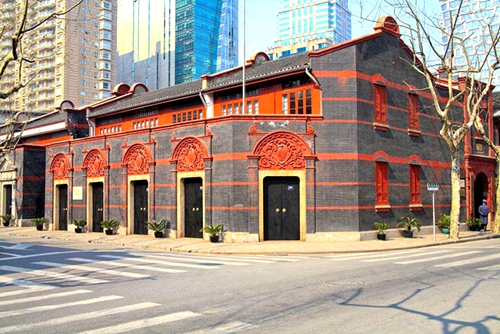 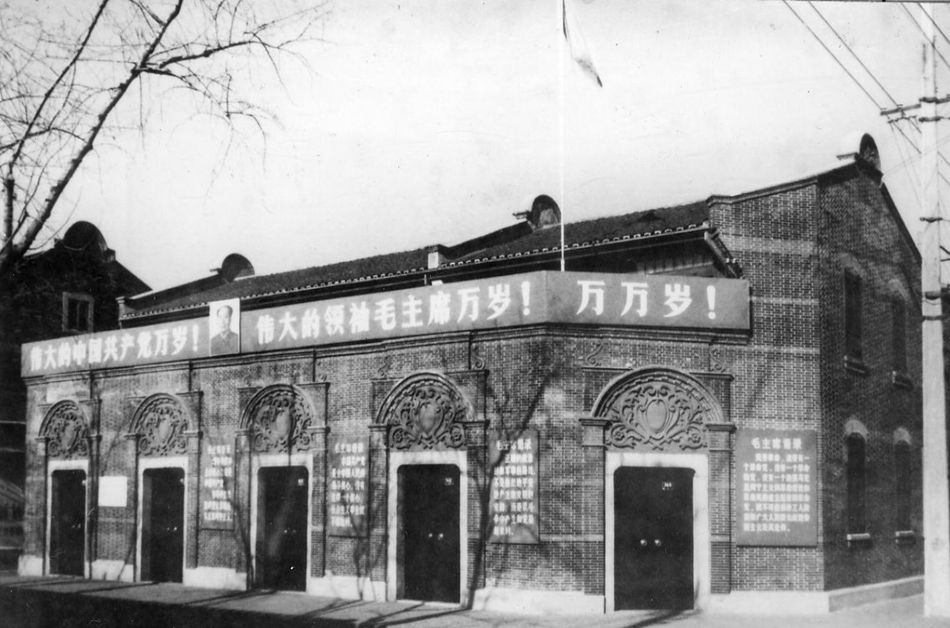 In 1999, the reconstruction of the memorial hall was conducted by the city government here. The new memorial hall is at a height of 12 meters, with 2 stories at the front and 3 stories at the back. You can find that there are photos of the delegates to the Founding of the Communist Party of China, First National Congress, several hundreds of precious relics, documents and photographs on display. Standing in the middle is Young Comrade Mao Zedong, holding a paper in his hand. Appreciating the photos, you might feel that the historical scene of the First National Congress of the Communist Party of China was showing in front of you. 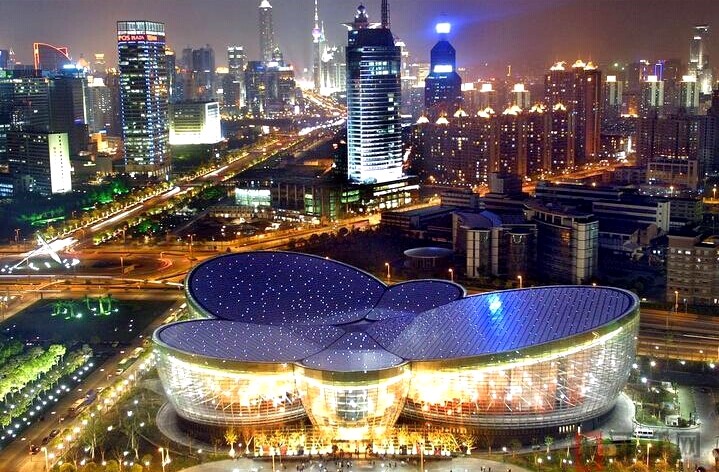 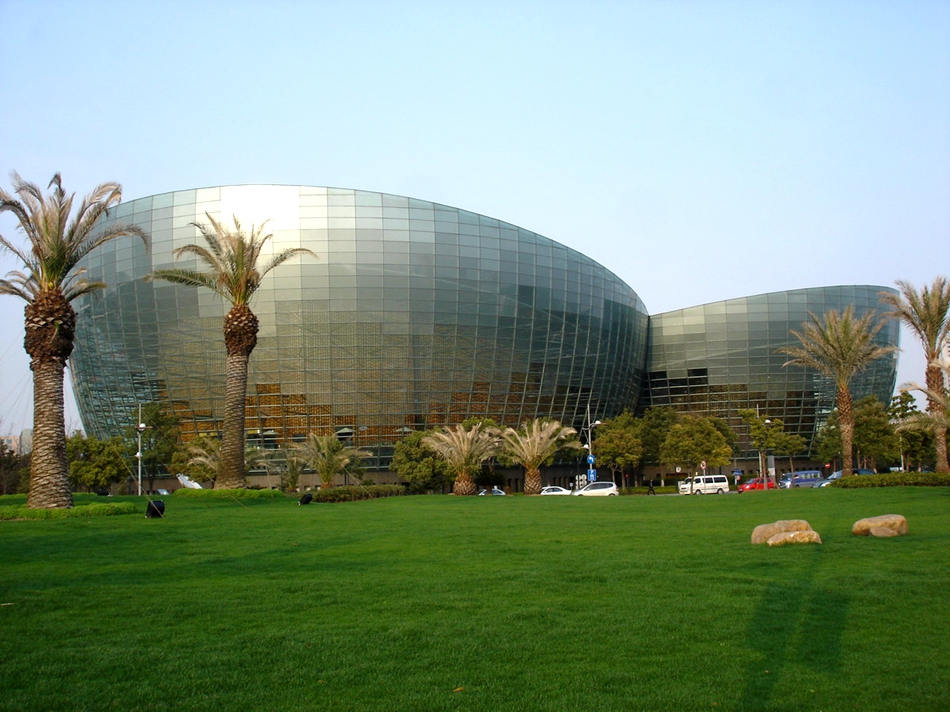 The new Shanghai Oriental Arts Center, in the shape of a butterfly, which is designed by leading French architect Paul Andreu, is an architectural symphony in Shanghai. Situated at Pudong New Area, it covers an area of 40,000 square meters close to Century Square. The five main halls of the center are like the five petals of a beautiful butterfly orchid in full bloom, which are the entrance to the main hall, the concert hall, the performance hall, the exhibition hall, and the opera house. In the center is the 1,953-seat concert hall, which is the city's first fully professional performance venue for concerts with the most advanced digital sound console, first-class seating for audiences and a state-of-the-art organ. It is considered to be one of the very few top concert halls in China. Besides the concert hall, the center is consisted by a 1,020-seat opera house and a 333-seat performance hall. The inner is decorated with a dazzling display of porcelain accessories.

The most dynamic city in the world’s fastest- changing nation, Shanghai is an exhilarating, ever-morphing metropolis that isn’t just living China’s dream, but is setting the pace for the rest of the world. During the One-Day Shanghai Tour, you will taste the feature of Shanghai both “Classic and Modern”, The City God Temple fair is one of the important stops on the sightseeing list when tourists come to Shanghai. Yu Garden, best preserved ancient Chinese private official garden style in Shanghai. The Bund, one mile stroll affords many spectacular views. The Bund, with more than 50 individual architectural styles, is reminiscent of the time when Shanghai was the center of Chinese economy and culture in the late 19th and early 20th centuries. Feel the traditional culture of Shanghai by visiting Old Residential Long Tang.

You will be picked up from your hotel by the driver and the guide around 7:30AM.
City God Temple (30 minutes):There are over a hundred stores and shops in this area, and most of these store buildings are nearly a century old. The temple connects to the Yuyuan Garden, another landmark of the old city.
Yu Garden (1 hour): Yu Garden or Yuyuan Garden is a renowned traditional landscape garden in Jiangnan. The garden is a virtual maze of caves, gardens, rockeries, paths, bridges, and buildings.
The Bund Stroll (40 minutes): Walking along the Bund, you can see the modern skylines of this China's biggest city.
Old French Concession & Old Street (40 minutes): The French Concession is the area of Shanghai once designated for the French, consisting of today's Luwan and Xuhui Districts.
Local Restaurant-Lunch (1 hour)
Pudong New Financial Area (20 minutes): Pudong is home to the Lujiazui Finance and Trade Zone and the Shanghai Stock Exchange and many of Shanghai's best known buildings, such as the Oriental Pearl Tower, the Jin Mao Building, the Shanghai World Financial Center. It is also the site of the future Shanghai Tower. These modern skyscrapers face directly across from Puxi's historic Bund, a remnant of a former concession in China.
Shanghai 2010 Expo Park (30 minutes):The park includes the Expo Stage, and visitors can walk and travel along the Huang Pu riverside. The park's landscaping combines Western and Chinese gardening styles. Well known places in Expo Park include the cranes, the wetland and the lotus pond.
Featured Shopping at Pearl City (30 minutes) .
Walk to “Xintiandi” street and visit the architecture shikumen (courtyard) (40 minutes): Xintiandi is an affluent car-free shopping, eating and entertainment district of Shanghai. Shikumen Residence, literally meaning ‘Stone Warehouse Gate’, is regarded as the most representative house style of Shanghai as the Hutongs and Courtyards are representative of Beijing. It is so named due to the stone door frame. This sort of residence combines the architecture styles of southern China and western countries.
The tour ends when you are dropped off at your hotel before 5:30PM.

*USD 80 per person
*Children between 3 and 8 will receive 50% discount.
*The price is only for your reference and  it is subject to seasons, high or low.Please send us your inquiry if you are interested.