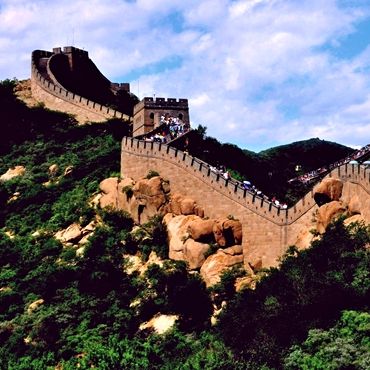 The route will pass both most modern and Oldest parts of Beijing sections.

In the morning, you will be met by your guide at your hotel and then transferred to the place where we start the side car tour. We will firstly pass by the Wangfujing Commercial Street which is this capital city’s most well-known shopping area. Then we go east to Beijing CBD Area where all the high rises gathered, seeing all the developments of most of the top companies from both home and abroad. Not far from Beijing CBD Area there comes the CCTV Tower, one of the modern wonders of Beijing. The CCTV tower is the home of many TV and Radio station broadcasts, including from CCTV1 to CCTV9. Next we come to the Old Observatory, which is one of the oldest observatories in the world. Near the Old Observatory is the Ming Dynasty City Wall, a scenic spot of ancient architectural relics of Ming Dynasty. Then we will have a Hutong tour nearby to see what local people’s life is like in the old Beijing area. Following the Hutongs, we come to the Temple of Heaven. The Temple of Heaven is a masterpiece of architecture and landscape design which simply and graphically illustrates a cosmogony of great importance for the evolution of one of the world's great civilizations.

We will have our lunch in a local restaurant after the Temple of Heaven. Then we drive to the Front Gate of Old Beijing, standing like some huge lost monolith at the southern end of Tiananmen Square. In the northwest of Front Gate is the National Opera Hall- A magnificent and gigantic project in Beijing and cultural island in the middle of a lake. Closely is Central Government (Zhongnanhai), office of the central government. Then we drive north to the Beihai Park, which is one of the oldest and most authentically preserved imperial gardens in China, with a history of 1,000 years, and the Forbidden City and Jingshan Park to its east. There we will drive along the road near the Moat of Forbidden City to Jingshan Park, which is directly north of the Forbidden City, and a beautiful royal landscape garden. Our next tour site is Nanluogu Xiang (famous old alley) - an old lane renowned for its long history, Hutong culture, specialty stores, and distinctive foods. North forward is the Drum Tower, The Drum Tower was used as the time keeping center for the whole old city and beaten to track the time and record the hours in history. Then we come to the Grand Canal (Houhai), Houhai is Beijing's newly developed old town of funky nightlife full of small bars and pubs with character. Finally we drive back to Wangfujing Street to visit the Old Catholic Cathedral, one of the best-preserved religious sites in the heart of Beijing. Our one-day tour will end here.

* Price is in US dollar. It may vary a little bit according to US dollar exchange rate fluctuation, car fuel price change and government tax adjustment, etc.
* The price is only for your reference and  it is subject to seasons, high or low.Please send us your inquiry if you are interested.

A. English-speaking guide and side car coach
B. Side car rental
C. Lunch

A. Entrance fees for the attractions in the itinerary
B. Gratuities, Tips to local people, the guide and driver (Although not compulsory, if you think your guide and driver have done a good job at the end of the tour, we suggest you tip them at you own decision to show your appreciations.)
C. Other Personal Expenses