Zhangjiajie National Forest Park is located in the southern part of the Wulingyuan Scenic Area. The several thousand mountain peaks of quartz stand rise abruptly from the ground. Streams flow through the Jinbian (Gold Whip) Stream Grand Canyon which is flanked by sheer cliffs. The Sightseeing Platform at Huangshi Village is shrouded in mist. Wild animals play freely in the dense forests. The scenic zone is like a fairy land with the beauty of wild nature.

In 1982 it was recognized as China's first national forest park (4,810 hectares). Zhangjiajie National Forest Park was designated a much larger (397.5 km²) Wulingyuan National Park by the State Council on August 1, 1988. In 1992, Wulingyuan National Park was officially recognized as a UNESCO World Heritage Site. It was then approved by the Ministry of Land and Resources as Zhangjiajie Sandstone Peak Forest National Geopark (3,600 km²) in 2001. In 2004, Zhangjiajie Geopark was listed as a UNESCO Global Geopark. 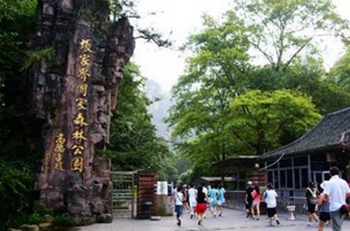 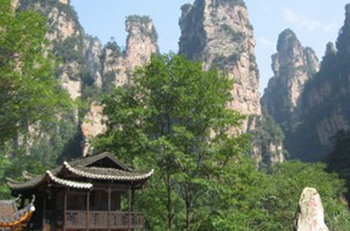 The National Forest Park had been given the name of Zhangjiajie after the name of a small village located within its bounds, and now a popular tourist attraction within the park. The three-character name can be interpreted as follows: Zhang is a common surname in China; Jia can be translated as family; and Jie can be translated as homeland, giving the completed translation of Zhang family homeland. It has been reported that at least one tourist guide has said that the name may have been chosen to convey the idea or impression of Open the family door to welcome the world, but this is not the locally-accepted and directly translated meaning of the name.

Located in the northwest of Wulingyuan, it is in the neighborhood of Suoxiyu Valley and Tianzi Mountain. It has an area of 72,000 acres, an average rainfall of 1200-1600mm, an average temperature of 16oC and a frost-free period of 240-300 days. 97 percent of the park is covered with plants which have 98 families, 517 species, over twice the total in Europe. Its gymnosperm species take up half of the total in the world. Zhangjiajie opens to the outside at the beginning of the 1980s and is the earliest tourist zone exploited in Zhangjiajie. It is noted for its queer peaks, tranquil water and beautiful forests. It is the first National Forest Park approved by the State Council in 1982. Its main scenic spots include Golden Whip Stream, Huangshi Fort and so on. Numerous pinnacles rise abruptly from the level ground in the shape of huge bamboo shoots pointing to the sky. Both sides of Golden Whip Stream stand grotesque peaks and are covered with old trees and vines. The stream, like colorful ribbons, flows through valleys. Watching mountains on Huangshi Fort, one can't help acclaiming as the acme of perfection.

Huangshi Fort
Huangshi Fort, named after a hermit Huangshi, is 1080m above sea level. It is higher on the south and elevated by stiff cliffs, covering an area of 16.5 hectors. It provides the largest collection of marvelous spectacles and also provides the larges sightseeing terrace above sea level in Zhangjiajie. The chief scenic spots include Treasure Box of Heavenly Books, the Magic Sea-suppressing Needle, the South Pillar of Heaven, the Golden Tortoise Watching the Sea and so on. If you stand on the terrace and watch as far as you can towards the south, you can see all kinds of queer pinnacles. If you watch towards the east, you can see numerous grotesque peaks by the Golden Whip Stream which resemble a clear, crystalline jadeite. Hence, there is a saying: " It can't be said that you have been to Zhangjiajie without reaching Huangshi Fort.
Golden Whip Stream

Located in the east of Zhangjiajie National Forest Park, named after the 380-meter high Golden Whip Rock, Golden Whip stream meanders 15 Li. Flowing from Laomo Gully first to Confluence of Four Rivers then to Suoxi Stream, it finally joins Li river, one of the four rivers in Hunan Province. It flows between steep grotesque peaks and luxuriant trees. Here, the meandering streams, the crystal-clear waterfalls, exotic plants and rare animals co-exist and constitute the extraordinarily beautiful, tranquil and natural ecological environment. No wonder it is called "the most beautiful valley in the world" and "the most poetic stream". The major scenic spots include Rock of Welcoming Guests, Golden Whip Rock, Reunion Rock and the Purple Grass Pond. 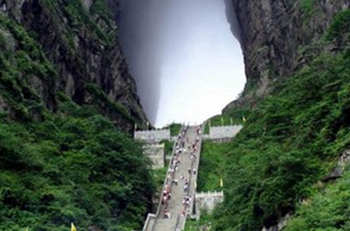 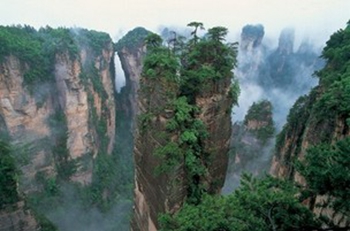 The Southern Heaven Gate
If you want to go to Tianzi Mountain through Suoxiyu Valley, you'll have to pass by a huge stone peak with a natural passage through it. The mouth of the passage is shaped like a gate. Thus, it is named the Southern Heaven Gate.
The Imperial Brush Peak
Walking a few steps from the scenic spot named the Fairy Maid Presenting Flowers and then watching towards the southwest on the sightseeing terrace, you can see a pinnacle resembling a huge imperial brush on the right of some graceful peaks, and some short pinnacles on the left in the shape of some brushes on the rack. It brings back the memory of King Xiang who read over official papers and drew a circle around his name on a document. How heroic he was. When you enjoy the view at dusk with red evening clouds in the sky, you'll see that the peak is glittering brightly on its tip as if there were red paint remaining on the point of the brush. Therefore, it is not surprising that more than30 domestic pictorials have its photos printed.
Seeing West Sea on the Heavenly Terrace
Heavenly terrace, resembling a little platform in heaven, is high and perilous, walled by stiff and crisscrossed precipices. The only way to it is a straight flight of 186-step stone stairs. Seen on the Heavenly Terrace with a bird-eye's view, the west sea is a great sea, a sea of clouds and fogs, of peaks, of greenness, and of mystery. The forest of pinnacles stand, strange stones cover the ground. The clouds roll and rays shine. Old trees' branches and roots curl up. How mysterious and unpredictable.