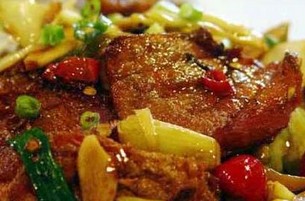 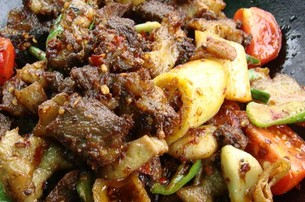 Tuannian Dish is a boiled dish made with radish, bean curd, cabbage, shallot, pork, and chili. It is not only delicious but also represents a good harvest, the reunion of the family, and the remembrance of the Tujia ethnic minority group's ancestors. Blooded Tofu is actually made from pig's blood and bean curd, which is fragrant and pairs well with wine. The Sour Fish is a cured dish usually made in summer. It doesn't taste fatty or smell fishy and can be stored for a long time. In addition to these delicious dishes, one soup should be mentioned here to add allure to a meal. This soup is called Gastraodia Tuber and Black-boned Chicken Soup, a healthy, secret folk recipe made from high quality Gastraodia Tuber and Black-boned Chicken.
As for local snacks, they are uncountable. Here are some representative types that we recommend. She Meal is made with sticky rice, preserved ham, and a wild vegetable called Hao. The ingredients are fried in lard and vegetable oil. It is a tradition among the Miao ethnic minority group to eat She Meal during the 'Chun She Festival' in March. It would be a shame to visit Zhangjiajie and not try this local delicacy. Another local snack called Sangzhi Salted Dried Tofu is said to have been a popular food in Changsha, Wuhan, and Guangzhou during the Qing Dynasty (1644 - 1911). It is often given as a gift because it contains as many nutrients as milk. And those who eat the Sangzhi Salted Dried Tofu find their skin is soft and smooth, thus it is also considered a good food for maintaining one's appearance. Two kinds of special fruit called Chinese gooseberry and Juhuaxin and Jinxiang Grapefruit are also popular in Zhangjiajie. Chinese gooseberry, which is grown in Sangzhi County of Zhangjiajie City, is well-known, and the juice has a unique nature and a good taste. In addition, Juhuaxin and Jinxiang Grapefruit is often known as 'Chinese Famous Grapefruit'. They are both worth tasting.
Recommended Restaurants
For your reference, the following is the restaurant rated most popular by the locals: 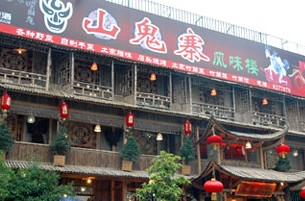 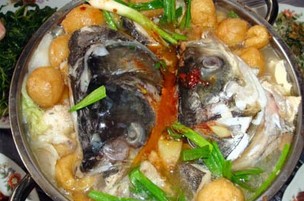 Shan Gui Zhai
This restaurant is decorated like a mountain village. Sweet glutinous rice cake is offered after each meal.
Average cost per person: around CNY50
Address: across from the Tujia Cate City in Lao Beimen Area
Laowu Yutou
Feature: They main attraction is fish head soup. Chinese red pepper, pimiento, tomato, and peanuts are put into the fish head soup to add flavor. The preserved ham in this restaurant is very fatty and sweet-smelling.
Address: in Sanjiaoping Area
Tongda Restaurant
Recommended dish: Seafood, Hunan Cuisine
Average cost per person: around CNY100
Address: on the first floor of Tongda International Hotel in Yongding Da Dao
Qiannian Waguan Soup Restaurant
Feature: The soup is boiled in a tile jar. It is very high in nutrients and is said to have a restorative power.
Address: Daqiao Bei Road (near Ziwu Road) in Yongding District

Tips: In Zhangjiajie there are no local restaurants that serve western-style food, but you can order it in almost every big hotel's restaurant.