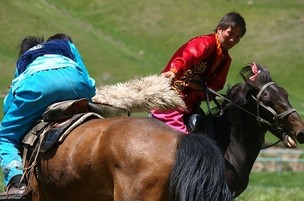 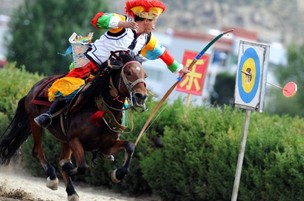 Sheep Snatching on Horseback
Sheep snatching on horseback is a traditional sport of several ethnic minority groups in Northwest China and is usually held at festivals or other occasions for celebration. The participants are required to have strong body, courage and good equestrian skills.

During the game, the horse riders are divided into several groups, with each group usually having more than ten people, waiting at an open field. A sheep without head and viscera has already been put at a designated place.

Sheep snatching on horseback usually held in summer and participated in by men. But in recent years, more and more women began to take part in this game.

Archery on Horseback
Archery on horseback is a traditional sports activity in the Korla. All people can take part in the competition regardless of the age or sex. Each participant shall get his own bow, 9 arrows and horse ready before the competition.

The 9 arrows will be shot in three rounds. In each round, the rider, with three arrows in a bag on the back, goes on an 85-meter journey on horseback, shooting the arrows at 3 targets, 25 meters away from one another. Failure to finish shooting the 3 arrows after the journey is regarded as a dishonor. The archer who has shot the most arrows on targets will be the winner.

The archery on horseback competition varies in scale, with the large one having as many as 100 participants, the medium one have 20-30 archers and the small one have 10-20 archers.

Horse Racing
Horse racing is the most exciting game at the Nadam, and anyone can apply to take part in the competition regardless his or her age. But in most cases, riders are boys and girls who are 6-13 years old.
Racehorses are divided into several age groups: two, three, four and five-year-old horses, adult horses and stallions.

The competitions are not held on special tracks, but across the steppe. The distance varies according the ages of the horses. It can be between 15 and 35 kilometers.

After the competitions ends, awards will be given to the fastest ten horses, accompanied by songs about the horses.

Archery
Archery is a traditional sport of the Mongols and also one of the most important games at the Nadam. For ancient Mongols, archery is the symbol of men.
The bow is 100-150 centimeters long and is usually made of resilient wood, including bamboo, birch and plum. The string is made of cattle hide or muscle.
Archery falls into two categories: distance archery and target archery. Target archery is more popular and distance archery was once popular in the old times, but gradually died out.
In the target archery, two or more poles are erected and a whole piece of sheepskin or felt rug will be put up between the poles. The center of the sheepskin or felt rug will be marked.
The participants are required to shoot at the targets from 75-80 meters away and the one that has shot the most arrows on target will be the winner, getting the title of "Mergen" (super marksman).