Datong is the second largest city in Shanxi Province, situated in the far north, near the border with Inner Mongolia. Datong is located only 4 hours away by drive or 6 hours away by express train from Beijing. It has a history of over 2000 years and listed among the first 24 historical cities in China. It's renowned for the coal industry-large-scale coalmines, power stations and a huge locomotive factory are everywhere. Due to the large quantities of marvelous ancient sites, remnants of the city's glory days as the capital city of two non-Han Chinese dynasties in ancient times, Datong has been listed one of the hottest tourist cities in China.

Geographic Features
Datong covers an area of 2,071 sq km in size. Surround by undulating mountains, Yu River running across from south to north, the topography slopes down from northwest to southeast. It is typical temperate continental climate, being dry and windy. The temperature varies greatly between day and night. The city had a frost-free period of 125 days a year, and received an average annual temperature of 6.4℃ and an average annual rainfall of 400-500 millimeters.

People
Datong has a population of 926,000. The main inhabitants include Han, Mongolian and Hui. The main religion here is Buddhism and Taoism. The natives speak Shanxi dialect, but the government language is still mandarin.

History
The Northern Beiwei Dynasty made Datong its capital from 398-494 AD, Datong has served as the political, economic and cultural center of the Northern China and was then the one of the largest cities in the world. It was also the alternate capital of Liao & Jin Dynasties known as the West Capital. In Ming & Qing Dynasties, it became a prefecture, one of the nine important strongholds along the Great Wall, that has given Datong a rich historical and cultural heritage: including the Yungang Grottoes, a world cultural heritage, the Upper & Lower Huayan Temple, the Shanhua Temple and the Nine Dragon Screen.

Datong, a hub of communications between three provinces of Jin (Shanxi Province), Ji (Hebei Province) and Inner Mongolia has been an important city of military strategy since ancient time. As far as in the Neolithic Age about one hundred thousand years ago, people had already lived on both sides of Datong Basin and on the plain of both sides of the Sanggan River. In the Spring and Autumn Period, the Beidi nationality lived in Datong. In the Warring States Period, Datong belonged to Yanmen Prefecture of the Zhao State. In the Han Dynasty, the Pingcheng County was established here. Datong was constructed as the capital in 398 AD in the Northern Wei Dynasty (386-534AD) by the Turkic Toba people and was named Heng'an. Although that was a period when the strife and warfare frequently broke out in North of China, Datong saw its prosperity. In the Sui Dynasty, it was renamed Yunzhong. A second period of greatness came with the arrival of the Mongol Liao Dynasty which made Datong the capital in 907AD. They were assimilated into the Jin Dynasty in 1125. Datong government office was constructed in Ming and Qing dynasties. Major scenic spots include Yungang Grottoes, Mt. Hengshan, Huayan Temple, Hanging (Xuankong) Monastery, The Nine Dragon Screen. 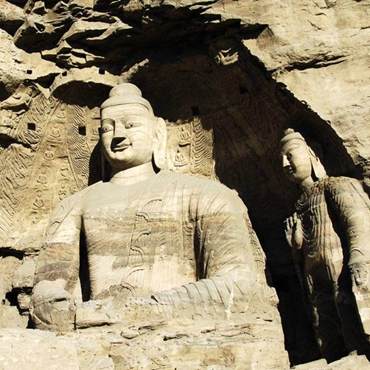 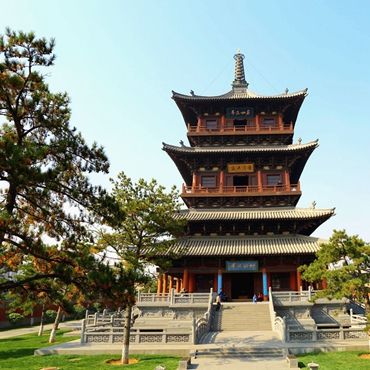 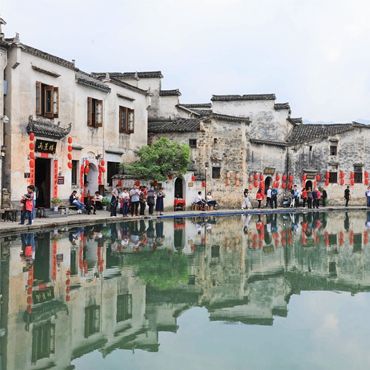