Sun Yat-sen Memorial Hall, one of the representative architectures of Guangzhou, has been completed in the year of 1931, costing 3 years to build. With an octangle shape and an oval golden roof, this magnificent and gorgeous building covers 3,700 m2 and stands uprightly to 49 meters. In addition to the Mall, there is a spacious yard, including which the entire mall site covers 12,000m2 in total. 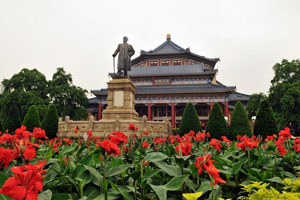 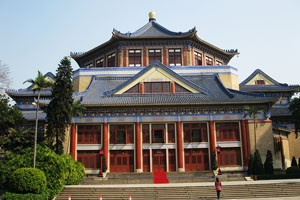 The design of Sun Yat-sen Memorial Hall follows not only the advanced architecture know how of the day, but also the Chinese ethnical architecture style. Therefore, you can experience the Chinese ethical culture while admiring the superior workmanship then.
Historically, Sun Yat-sen Memorial Hall is a significant site, where witnessed many great events happened in Guangzhou and even China, such as the Ban Parade against Opium Smoking and Trade in 1936, the celebration of 100th Birthday of Chairman Mao, the 60th anniversary of the victory of the Long March and the anniversary of the victory of the Anti-Japan War. Besides, many meaningful ceremonies, like the Guangzhou International Collective Wedding Ceremony and the festival celebrating shows, are held here.
In front of the Mall, a 5-meter-tall bronze statue of Dr. Sun Yat-sen, Father of the Republic of China who advocates The Whole World as One Community, is standing there.
There are many ceiba trees, the City Flower of Guangzhou, inside, which will be fully blossoming in March. Ceiba is a symbol of the heroism and the oldest ceiba in Sun Yat-sen Mall is as old as 300 years, which also symbolizes that the merits of Dr. Sun will remain immortal.
Opening Hours: 06:00 –24:00
Recommended Time for a Visit: 45 minutes
Ticket Price: CNY 5 for children, CNY 10 for adults
Location: No. 259, Middle Dongfeng Road, Yuexie District, Guangzhou
Transportation: Subway No. 2 and bus No. 2, 27, 42, 56, 62, 74, 80, 83, 85, 185, 133, 204, 209, 224A, 224, 229 and 261 can take you there directly.
Guangzhou Guide
1
Guangzhou Transportation
2
Eating in Guangzhou
3
Shopping in Guangzhou
4
Entertainment in Guangzhou
5
Guangzhou Travel Tips
6
Guangzhou Tour Maps
7
Guangzhou Q & A