For generations, the Three Gorges Dam on the Yangtze River has been a dream and will be one of the largest construction projects ever undertaken by mankind.

From its source to its estuary, the Yangtze River meanders over 6,300 kilometers. Its annual runoff into the sea amounts to nearly 1,000 billion cubic meters and its total drop is more than 5,800 meters with a hydroelectric power potential of up to 268 million kilowatt. In order to harness the River and develop its resources, extensive efforts in survey, planning and scientific research have been made since the founding of the People's Republic of China. And researchers get to the conclusion that the TGP (Three Gorges Project) is the key to the comprehensive control of the floods and exploitation of the resources of the River. 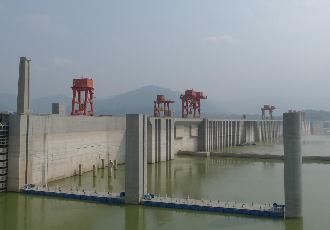 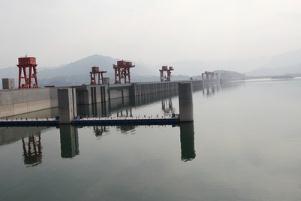 In 1992, the Chinese Government finally gave the go ahead for the scheme, some seventy years after Dr. Sun Yet-Sen, pioneer of the Chinese democratic revolution, first proposed the idea. The Three Gorges Dam site is 27 miles upstream from Yichang City proper, at Sandouping Town, 38km upstream from the Gezhouba Dam Lock, inside the third of the Three Gorges. It is planned to be by far the largest hydroelectric project in the world and will provide China with tremendous power generation and flood control services. The Project calls for the construction of a concrete dam, a hydroelectric power plant and a series of locks just below the scenic Three Gorges region. The project is designed to be built in three phases and is scheduled for completion in year 2009.

The scheme of the project is "development in one cascade, construction at one stroke, impoundment at stages and resettlement in succession". The concert gravity dam will be 3,035m long on the top, with the crest at EL 185 meters. The designed normal pool level of the reservoir is EL 175 meters, and the total storage capacity 39.3 billion cubic meters. The designed two powerhouses to be located on both sides of the spillway have 26 units of generators of 700,000 kilowatt each, with a total capacity of 18.2 million kilowatt and an annual output of nearly 84.7 billion kilowatt hour. The designed One-way shipping capacity of the navigation facilities is 50 million tons a year. A big lake will appear in the Three Gorges, covering 418 square miles and stretches for 373 miles, with 84.7 kilowatt hours’ annual output of electricity. The twin 5-flight ship lock can adequately handle tows up to 10,000 tons. It is expected that the preparation work of the Project will take 2 years and 15 years respectively. Owing to the construction of the Project, 1.13 million people are expected to be resettled and 28,800 ha farmland to be inundated. When completed, the Project will be beneficial in ten aspects, including flood control, power generation, navigation, aquaculture, tourism, ecological protection, development-oriented resettlement, transferring water supply and irrigation, which makes it a unique super power station worldwide. 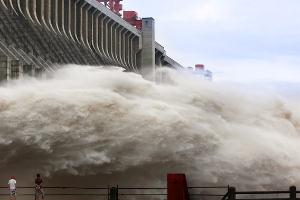 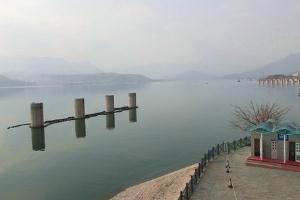 The main elements of the project are the dam, two power plants, and the navigation facilities. The spillway dam section is in the center of the river channel, that is, on the original main river course, while the intake and non-overflow sections are arranged on each side. The powerhouses are to be located at the toe of the intake section. The navigation structures are on the left bank. The structure of the project is: Spillway, Left Powerhouse, Right Powerhouse, Ship lift, Temporary Ship lock, Permanent Ship lock, Dam Site.

Since the project kicked off December 14, 1994, it has attracted the world's attention on it. More and more tourists are coming to see the world’s largest water conservancy project. Most passengers just come for enjoying watching this experience and the boat feels and looks something like a toy ship in the hands of a child in the bathtub during the whole process.