Situated at just 500 meters (1,640ft) across the water from the southwest of Xiamen, The 1.78-square-kilometre Island of Blown Waves is a major scenic spot in Fujian, with serene beauty, a tranquil atmosphere and buildings in various architectural styles. Visitors can reach it by steamship from Xiamen City in about 5 minutes. It falls in the "Must Visit" category. The entire island is an attraction in itself. it features one of the largest concentrations of classic colonial architecture in all of China.

During the Ming Dynasty (1368-1644), the island was called 'Yuanshazhou Island'. It got its present name from the huge reef surrounding it. The waves pound the reef and it sounds like the beating of a drum, while the tide comes in The island now named as 'Gulang'. Gu in Chinese means 'drum', and Lang, 'waves'.

There is plenty to see and do on this small island. Island of Blown Waves is renowned for its delicate natural beauty, its ancient relics, and its varied architecture. The island is on China's list of National Scenic Spots and also ranks at the top of the list of the ten most-scenic areas in Fujian Province.

On the Island there are about 20,000 permanent residents, all of whom enjoy a comfortable, relaxing life. Because there are no motor vehicles on Island of Blown Waves and only electric-powered vehicles are permitted on the island, the environment is free from the noise and pollution of combustion engines. Breathing the clean air, appreciating the ever-present green trees and lovely flowers, anyone here can feel like they are in heaven. 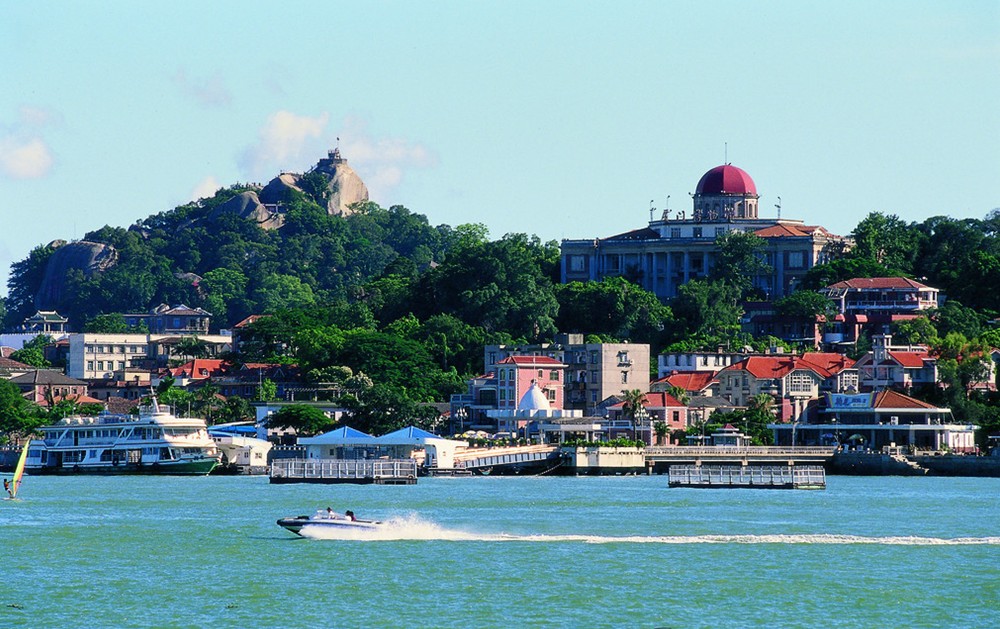 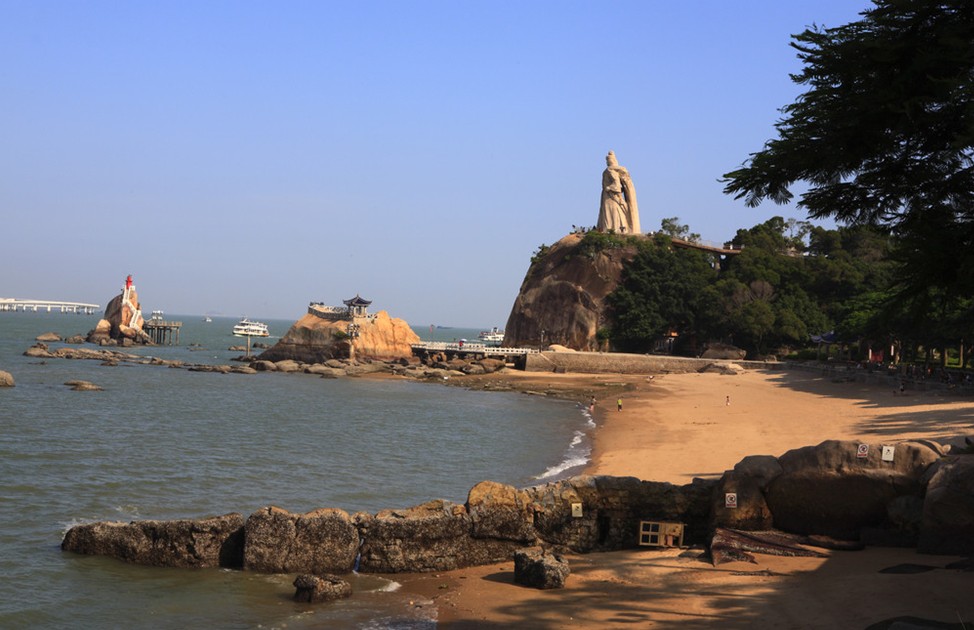 Island of Blown Waves was the center for foreign communities who settled here after 1842. Many attractive Western-style mansions, churches, warehouses, and government buildings built in19th century still survive and well preserved. With classical and romantic European-style architecture, the island truly deserves to be called the 'Architecture Museum'. It is also known as the 'Cradle of Musicians' and 'Island of Music' because of its reputation for music appreciation.

Circling the island, the Island Ring Road allows you to fully enjoy all the sights of this small, charming island.The four-kilometre-long ring road is flanked on one side by the beach and on the other by a string of bungalows built in English, French, German, Japanese, Spanish and Chinese styles. Strolling along the road one can see islets, bays, flowers, trees, pavilions and terraces. This is on the highest point of Gulangyu and is accessible only by a "sky ladder" - a steep trail which also takes one to Riguang Temple, the Ancient Summer Cave and the platform where General Zheng Chenggong (Koxinga) reviewed his naval force.

Among the many scenic spots on the island, the most attractive are Sunlight Rock and the Shuzhuang Garden. 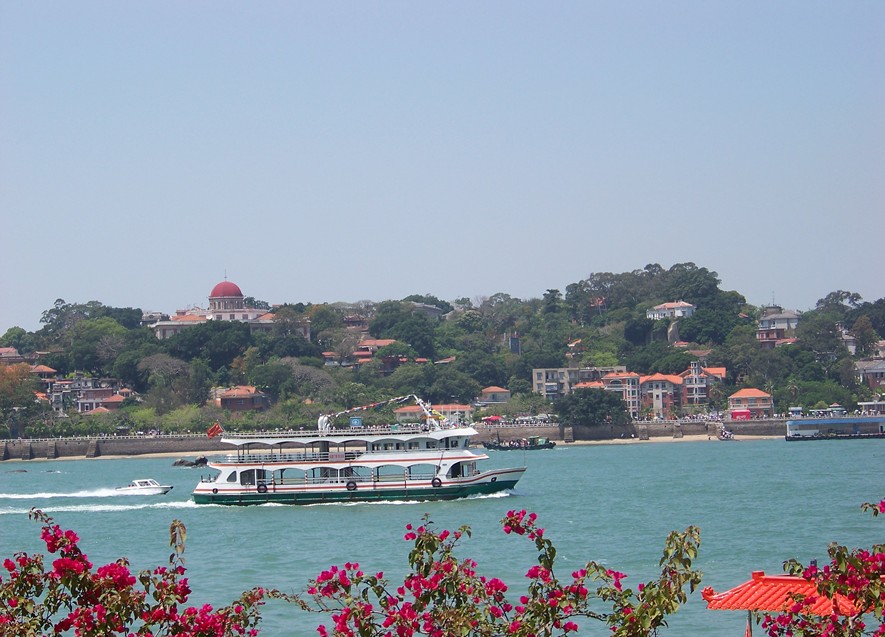 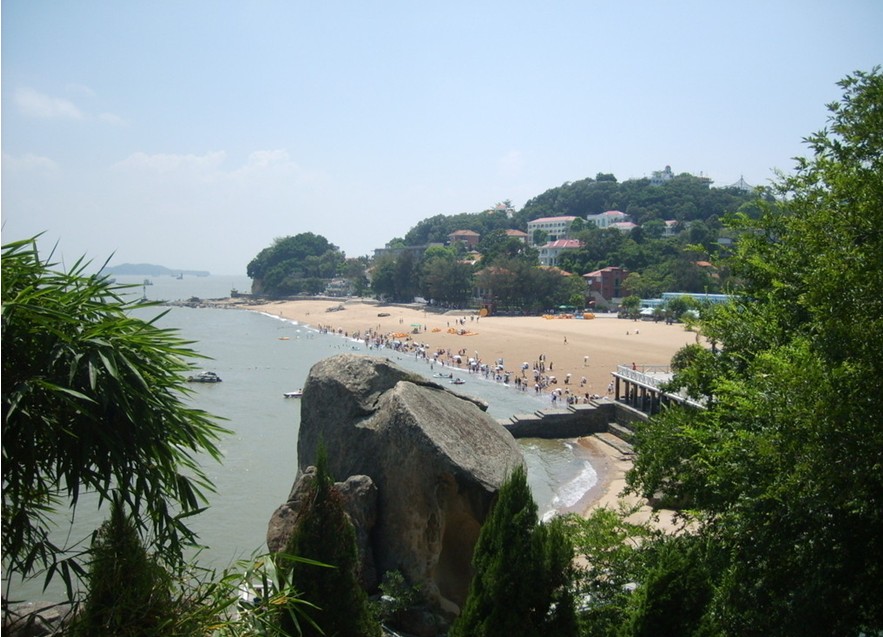 Sunlight Rock provides a panoramic view of the booming metropolis of Xiamen. Though it may not rank with high mountain peaks, it appears superb and grand when seen from afar. The name comes from a sun-shaped formation in the granite. When the sun rises, the morning light illuminates the granite in Sunlight Temple and the rocks are bathed with sunlight.

At the foot of Sunlit Rock stands the Zheng Chenggong Memorial Hall, where the life of the general is relived through more than 300 cultural relics, historical documents, photos, sculptures and scale models, on display in seven showrooms.

Shuzhuang Garden
First built in 1931 on the southside of the island, Shuzhuang Garden was once a private villa. It became a garden park open to the public in 1955. It is divided into two parts-the Garden of Hiding the Sea (Canghaiyuan) and the Garden of Making-Up Hills (Bushanyuan).

As a complex of Chinese traditional gardens, Shuzhuang Gardens entices visitors so much that one cannot help but want to see inside.The designer of this pretty garden attempted to create an environment that integrates the feelings of Island of Blown Waves into its design: The garden is in the sea and the sea is in the garden. The overall impression here is pleasant. The pavilions, bridges and towers together with the natural sea and trees give the tourists a beautiful view of Chinese garden.

The garden is full of species of flowers, a botanist's delight, and there is also a clean, yellow sand beach that is a good way to brave the Chinese waters, although it can get a little full. How wonderful when you are sipping a cup of tea in the garden's tea house or relaxing with a sea view under the shade of a Gulangyu tree.