The Three Gorges extend 193 kilometers along the Yangtze River from the western Baidicheng in Sichan Province, to Nanjinguan of Yichang city in Hubei Province in the east and are considered as one of China's finest areas of scenery, cultural history and sources of tourism. 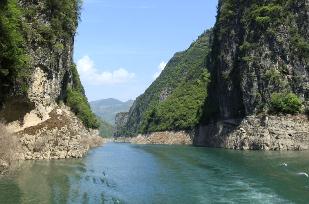 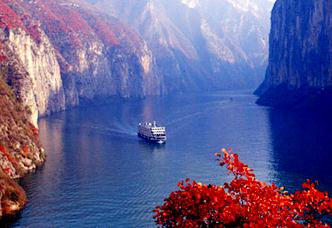 The shortest of the Three Gorges (8 kilometers) is Qutang Gorge. It is considered the most dramatic by many visitors. The river navigates through the gorge's sheer, steep cliffs where the Meng Liang staircase from the Song Dynasty can be seen.

Different from the straight and craggy Qutang Gorge, the 44-kilometer long Wu Gorge is known for its exquisite deep valleys and forest covered mountains.

The longest of the three (66 kilometers) is Xiling Gorge. The banks are covered with orange orchards. Along this gorge sit many archeological sites, including the Huangling Temple, first built during the Three Kingdoms Period.

From east to west, Qutang Gorge measures 8 kilometers, starting from Baidicheng and ending at Daixi Township. With vertical cliffs of some thousand meters high as its two flanks, the Qutang Gorge is only a few dozens of meters wide just like a narrow gateway. With swash and rumble, the surging Yangtze River pours into the gateway with great momentum. Looking up towards the tops of towering precipitous mountains along the Gorge, one sees from a boat only a narrow strip of clouds and sky, but under foot the River tears on violently.
Wu Gorge

Wu Gorge extends 40 kilometers from the mouth of Daning River of Wushan Mountain in the west to Guandukou of Badong in the east. The Wu Gorge is known for its deep valley and quiet beauty. The "Twelve Peaks" lining the banks of Wu Gorge, have been admired by visitors from all over the world. It is said that if you look carefully, a silhouette of a goddess can be seen at the top of Goddess Peak.

The twelve peaks of Wushan Mountain all raise to the blue sly. They are endowed with various fascinating shapes. Among them, the most fabulous is the Peak of Goddess. It pierces through the heaven, and towers over the Yangtze River. A protruding rock of the Peak has the shape of a slim girl shrouded in clouds and mist faintly visible as if clad in fine gauze dress, looking attractive and exuding tenderness and love. 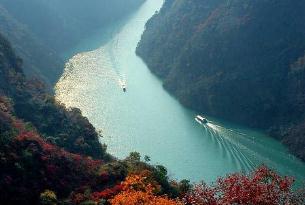 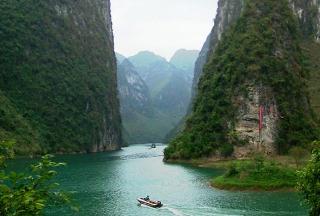 Xiling Gorge is one of the three gorges between the Gezhouba Dam and Three Gorges Dam. The gorge extends 66 kilometers in length is composed of many scenic spots such as, "Military Manual and Precious Sword Gorge", "Ox's Liver and Horse's Lung Gorge", "Kongling Shoal" and "Shadow-play Gorge". Among the cultural relics in the gorge are "Huangling Temple" and the "Three Travellers Cave".
The 400-kilometre section includes lots of breathtaking natural scenic spots including dozens of small gorges with various shapes. Also found along the route are Qu Yuan Temple and, of course, the two huge dams and lakes blocked by the dams.

Xiling Gorge is renowned for being extremely perilous. The gorge, 80-km-long, is the longest of the Yangtze's Three Gorges stretching from Xiangxikou in the east to Nanjingguan Pass in the west and covering two prefectures in Hubei Province. It is at this spot that the journey appears to be most perilous; the water is full of turbulent whirlpools and dangerous shoals.