Zhuhai situates in southern Guangdong province and the southwestern part of the Zhujiang River Delta, it is a newly rising tourist city. It is not only the economical peculiar area but an important port. It is 1,266 square kilometers in area, with the population of 1.18 million. Along the coast, there are 140 islands, so we call here "Islands City". The western area is covered by a lot of rivers. It has 6,000 square kilometers of sea dotted with 145 islands, among which the Lingding Island is the most well known. The Lingding Island consists of two parts, the outerior and the interior. The Outerior Lingding is located on the verge of mountains and islands. On the other island named Qi'ao there are many historical sites. The cliff carvings at Baojing Bay on Gaolan Island have a history of 3,000 years. On the cliffs were carved clouds and rivers, birds and animals, and various figures, depicting the life of primitive tribes. It is the maritime monsoon climate in the south inferior torrid zone. The average temperature is 22.4 degree Celsius, and the average precipitation is 1,990mm. The black period can last 360 days. About the mineral resources, mainly, there is quartz sand, granite and building sand. Nearby, the Wanshan Fishery is one of the biggest in Guangdong. The gulf here is very beautiful. It is full of wonderful mountains, and the climate here is very comfortable. The traditional specialties are crab, lobster, oyster, squid, fruit and flowers.

Major industries include electronic, communication apparatus, food, chemical industry and textile. And also there is machine, cloth-making, sewing, leather and metallurgical industry. Among them, the products of electronic, communication apparatus, drink and leather goods occupy important positions in China. The foreign capital companies are the most important part of the industry value. In agriculture, mainly, there is rice, sugarcane, tobacco, peanut, fruit, flax, vegetable and aquatic product, etc. The highway and water transport are both convenient. The big ships can be moored here. And Zhuhai and nearly 10 cities in China are open to navigation. It is the most important port for the imports and exports, it is also the important base of rear-service supply for the Nanhai Oil field. Major scenic spots include The Statue of Fisher Girl, Yuan Ming New Palace, The Meixi Royal Stone Archways, Cliff Carvings and The Shawan Ruins. 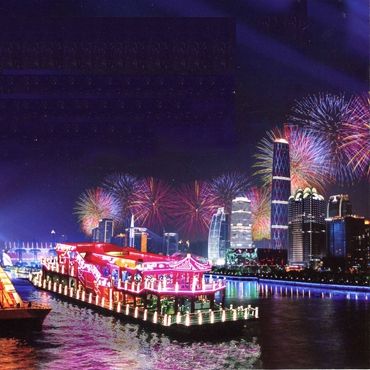