Built at the order of the Tibetan King Sontze Gampo in the 7th century, Potala Palace has witnessed 1300 years’ changes. Located among the mountains, the Potala Palace is the most comprehensive art treasure house of cultural relics in Tibetan area of China. Potala Palace is an architecture complex that was construction for the Princess Wen Cheng in Tang Dynasty, while it has become the official place for the Dalai Lamas to work in winter since 17th century.
Standing on the peak of the Potala Hill, Potala Palace is the symbol of Lassa. The magnificent designs are the amazing parts. With a height of 117 meters and an area of structure of 100,000 m2, the gorgeous huge golden roofs are shinning and attractive. A serpentine stairway up the mountainside leads to the palace buildings on a height of 3,700 meters above sea level. Its stone-and-wood main building has 13 stories, measuring 110 meters in elevation. Consisting of 999 rooms (plus the red tower on the mountain, one thousand rooms in total), the Potala Palace is a reflection of the sophisticated architecture art at the time. 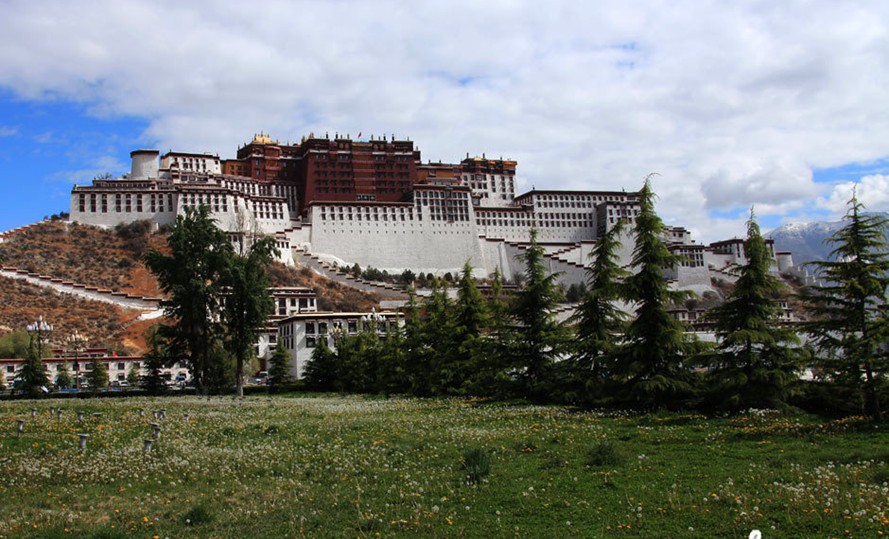 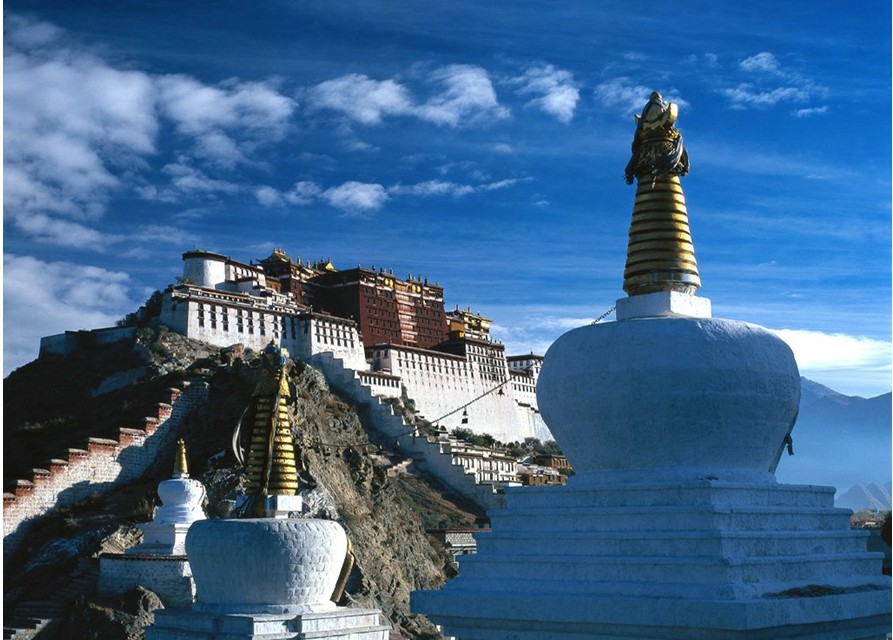 The mammoth and solemn Palace is composed of the White Palace and Red Palace. The former is for politics and daily life of Dalai Lama. The latter comprises halls housing sturpa-tombs of successive Dalai Lamas and various Buddhist halls. One of the most fascinating scenes in the Potala Palace is the Buddhist statues of various sizes made of copper, gold or silver, which are unique and exquisite in shape, excellent in workmanship and true to life. The Grand Hall of the Red Palace consists of dozens of Buddhist halls, scripture halls and mourning halls, connecting with each other by painted corridors and staircases. The Buddhist Halls enshrine the statues painted in gold of Sakyamuni and deceased Dalai Lamas. A great amount of ancient scriptures are stored in the Scripture Halls. The mourning halls house the sturpa-tombs of 13 Dalai Lamas. All the halls are full of streamers elaborately embroidered with scriptures and incantations. Above the statues of Buddha are hung colorful ribbons.
The Potala Palace is an enormous "Art Museum" filled with dazzling array of paintings. The Art Gallery on the second floor of Sixipingcuo Tower alone contains 698 mural paintings, which has been constructed since 1648 A. D. by 63 painters and completed 10 years later. Over the past 300 years, the original murals have undergone several renovations and a number of new murals concerning a broad spectrum of Buddhist life and the unique land, custom, history and episodes of Tibet, have been added, making it more colorful and gorgeous.
Travel Tips for Potala Palace
1. Pay respects to the Buddhist customs
2. Take off your hat inside the Potala Palace
3. No photographing inside the Potala Palace
4. Go out the Potala Palace only from the West Gate
5. Don’t linger at any place inside the Potala Palace
6. No stepping on the doorsill of any room in the Potala Palace
Opening Hours:
9:00 -- 12:00 -- Break -- 15:30 -- 16:30 (except for some festivals or ceremonies)
Ticket Price:
200 CNY (May, 1 to October 31)
100 CNY (November 1 to April 30)