Tibetan Opera, A Cultural Symbol of the Tibetan People

Tibetan opera (Lhama, or Ache Lhamo) is a folk opera of the Tibetan people. With its fascinating charm, it proves that Tibetan culture is extensive and profound, and also confuses outsiders. It is a shining gem that grows on the pitiless Tibetan plateau and is a cultural symbol of the Tibetan people.

Tibetan Opera, is an ancient art form in Tibet that boasts a history of over 600 years, making Tibetan Opera at least 400 years older than Peking Opera, China’s national and therefore “yardstick” theatre form.

But Tibetan Opera is more than just an operatic form of theatre with a rather ancient history, comparatively speaking; it is recognized as an integral part of the very cultural identity of the Tibetan people。

The Tibetans cherish their unique opera, which has been called a “living fossil of traditional Tibetan culture” and which the Tibetan people have done their utmost to keep alive by renewing it, making it as contemporary as possible while remaining as true to its origins as feasible, even though Tibetan Opera came very close to disappearing not so very long ago amidst the social upheaval that has characterized Tibetan culture the past half-century.

Depending on situations, Tibetan Opera can last from several hours to several days. It usually begins with a prelude called Wenbadun, during which two fully-equipped hunters will make a debut, dancing with masks and chanting to dispel evil forces and purify the stage. Then seven princes will show up with seven fairies. The princes will introduce the characters and plot, while the fairies will mesmerize the onlookers by elegant dance. Tibetan opera culminate in the body part and ends with a ritual dance of blessing. Through vibrant dance, captivating chanting and eye-dazzling masks, the audiences will be transported into the immemorial ancient time, an era of divinity and eternity. It is more than a pious bow to deities, but a warm embrace to life, beauty and vision. 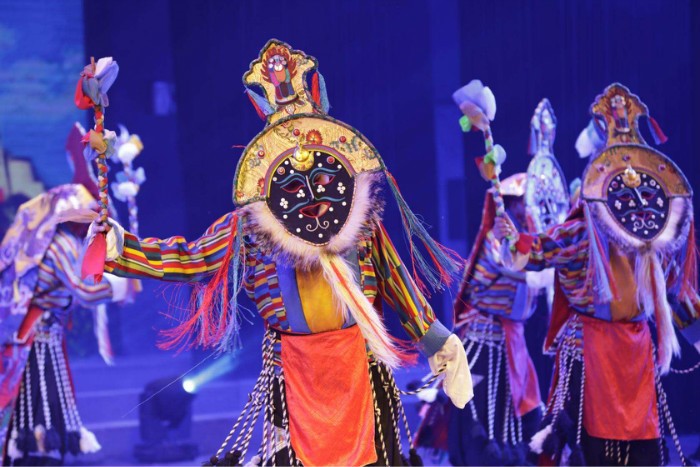