Chongsheng temple, facing erhai lake in the east and cangshan mountain in the west, is located at the foot of diancang mountain and the shore of erhai lake. In history, there were nine Dali emperors who became monks in chongsheng temple, which is called “tianlong temple” in jin yong’s martial arts novel “tian long ba bu”. The three towers cultural tourism area of chongshengsi is a national AAAAA scenic spot.

The three pagodas consist of a large pagoda and two small pagodas, forming a symmetrical triangle. The three pagodas are made of brick and covered with white earth. In China, the three pagodas are often used as magical defences against natural disasters, especially earthquakes and floods, as the four-character inscription on the tower reads: “control mountains and rivers forever.”

The main tower, the chihiro tower, was built between 823 and 840, and was built by king feng you of nanzhao. The chihiro tower is square and 69.4 meters high. The appearance of the chihiro pagoda is similar to that of the small wild goose pagoda in xi ‘an. The former sunda tower has 16 floors, each with many upturned eaves and a carved shrine containing a seated Buddha.

The other two pagodas, 42.19 meters high, are octagonal and have a hidden roof with ten eaves, located to the northwest and southwest of the former sunda pagoda. Judging by their structure and shape, these two small pagodas should be Dali in the song dynasty style.

Chongsheng Temple complex is located behind the Three Pagodas which was the royal temple of Dali and one of t6he largest Buddhist centers in Southeast Asia. There are many sites to explore in front of Chongsheng Monastery and in the monastery. 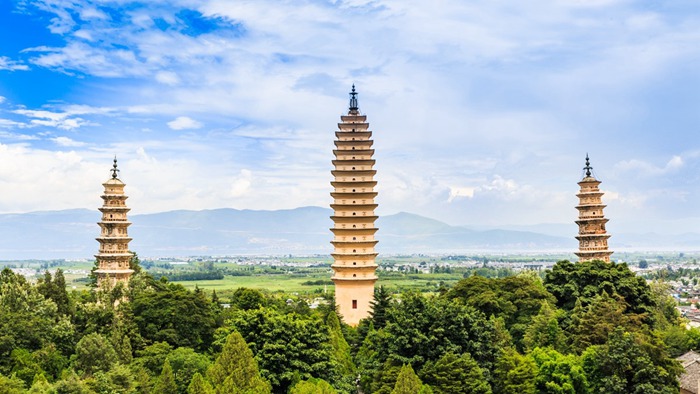 Orange Isle, the First Island in China
Mount Heng - North Yue, enjoy the Jinlongxia, Gusongqidong, Taodong and other natural landscape
Shapotou, One of the Five Most Beautiful Deserts in China
Chaka Salt Lake