The Shu School of Chinese Embroidery, The Symbol of Chengdu

The art of embroidery was widely spread throughout China during the han dynasty. There were four different styles or schools of embroidery, although each peaked after the silk road trade boom created demand for Chinese goods.

The earliest embroidery in China dates from the zhou dynasty (1027-221 BC). It is not clear if this is the origin of embroidery, as there are also early examples in Egypt and northern Europe. Embroidery in ancient China was made of silk, because the spinning of silkworms had been mastered. Curiously, Chinese embroidery was originally a male domain; It wasn’t until later that Chinese men realized that women were better at it.

The four major schools of Chinese embroidery have been listed as China’s intangible cultural heritage by the government. They are: Shu embroidery, Xiang embroidery, Su embroidery and Yue embroidery. Miao embroidery is an independent style of embroidery from ethnic minorities.

It is tightly stitched — necessary for intricate work (think high-pixel versus low-pixel resolution).

It excels in the art of mixing threads in a gradually increasing fashion to effortlessly transition from one solid color to another.

It the natural world. The panda is a current popular motif as Chengdu is the home for the panda.

It is typically done on soft, satin fabric and makes use of brightly coloured threads.

It follows strict, tradition-bound principles, that are divided into 12 primary weaving categories which result in 122 subcategories. 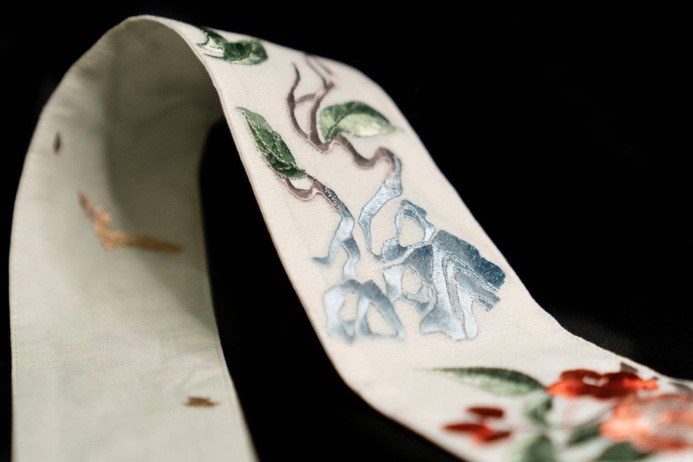