Located in northwestern China’s Shaanxi province, Jingbian county boasts the largest Danxia landscape of the province. These formations show different colors at different times and various shapes from different angles, looking grand and magnificent. It is said that the landscape is comparable with the Wave, a sandstone rock formation located in Arizona, United States. 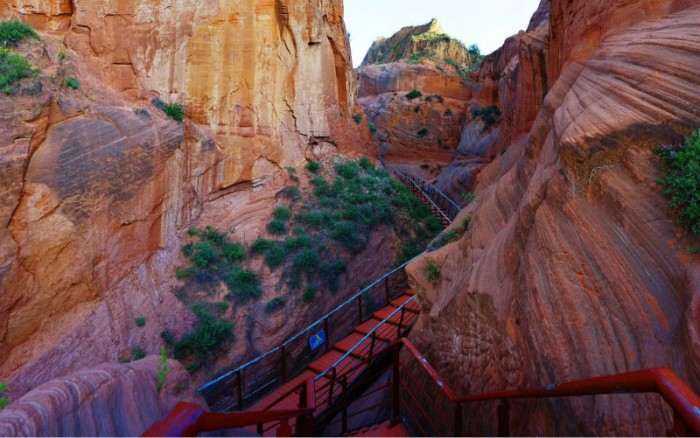 Wave Valley, also known as Jingbian Red Sandstone Canyon, Jingbian Longzhou Danxia landform, Yanjiazhaizi, located in Longzhou Township, 22 kilometers southeast of Jingbian County, commonly known as Yanzhaizi. The wave valley is a red sandstone landform. Because the texture on the rock sand is like a wave, it is called “The Wave”, that is, the wave.

In the 1980s, people discovered the wave valley at the junction of Arizona and Utah. The magical appearance and high scientific value made it one of the eight rock wonders of the world. The wavy valley of Jingbian also has a red sandstone gorge comparable to the American wavy valley.

The record of this strange rock formation in jingbian is as follows: it shows a wonderful world carved out of sandstone by millions of years of wind, water and time. The complex layers of wave valley rock are made up of giant sand dunes that were deposited during the Jurassic 150 million years ago. Sand dunes are constantly covered with layers of red sand impregnated with groundwater, and over time, minerals in the water condense the sand into sandstone, forming cascading structures.

Jingbian wave valley in northern Shaanxi, a loess – covered area, has such a stone landscape is a miracle. Jingbian “wave valley” this name is given here by the photographer, it and Arizona wave valley is a certain difference. Arizona’s wave valley has white lines sandwiched between red and white, while Jingbian’s wave valley is mostly red