The Spring Festival is a traditional Chinese festival and the most important one of the whole year. In 2020 Chinese New Year festival falls on Jan. 25. It is the Year of the Rat according to the Chinese zodiac, which features a 12-year cycle with each year represented by a specific animal. 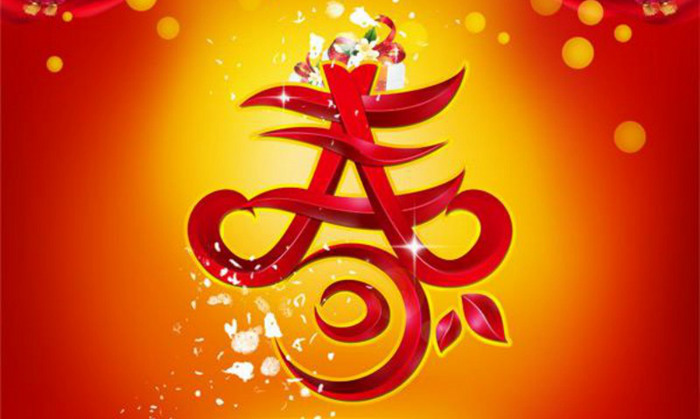 Chinese New Year has a far-reaching history of over 3,800 years. The origin of the festival can be traced back to the worshiping activities in China’s ancient agrarian society. The date for the ceremony wasn’t fixed till the Han Dynasty, when Emperor Wudi commanded to use the lunar calendar.

The historical reason for beginning the new year in such a time is that it is the time between autumn harvest and spring plowing and planning. In other words, it is the time for rest, relaxation and celebration after a year’s toil.

Except this practical reason for celebrating the Spring Festival, a popular Chinese legend offers another explanation, which is affectedly known in China.

In ancient time, a mythological demon called” Nian” that lived under the sea would plague people once a year on the even of the new year. It jumped out from the sea, attacked villages, devouring people, animals and plants.  Could no longer bear Nian’s brutal persecution, the villagers gathered to discuss how to deal with” Nian” and some people suggested that the demon was afraid of loud noises, red color and flame.

So people lighted firecrackers, put on red couplets on their gates, lit firework and beat gongs and drums to drive Nian away. The idea worked and Nian ran away.  Since ever, the custom and tradition of celebrating the Spring Festival born and the practice of putting red couplets on gates, setting off firecrackers, etc have been passed down. 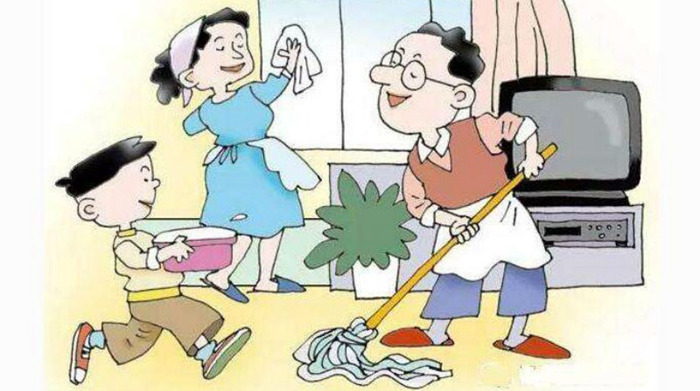 “Dust” is homophonic with “chen” in Chinese， which is means old and past . In this way, “sweeping the dust” before the Spring Festival means a thorough cleaning of houses to sweep away bad luck in the past year. This custom shows a good wish of putting away old things to welcome a new life. 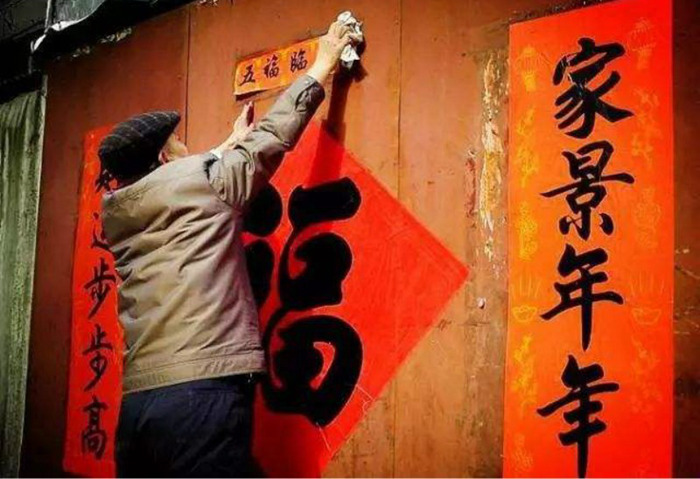 “The spring couplet is a special from of literature in China. the spring couplet is composed of two antithetical sentences on both sides of the door and an inscription, usually an fortunately phrase, above the gate. The sentences pasting on the right side of door is called the first line of the couplet and the one on the left is the second line. On the eve of the spring festival, every household will paste on doors a spring couplet written on red paper to give a happy and prosperous atmosphere of the festival. 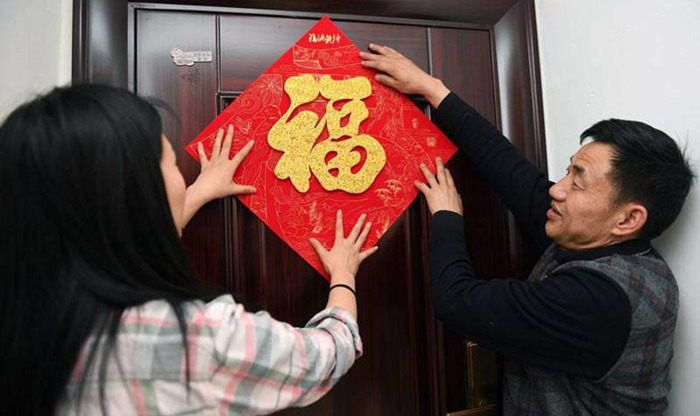 Paper-cuts, usually with lucky patterns, give a happy and prosperous atmosphere of the festival and express the good wishes of Chinese people looking forward to a good life. In addition to pasting paper-cuts on windows, it is common for Chinese to paste the character “fu”， big and small, on walls, doors, and doorposts around the houses. “Fu” shows yearning toward a good life. Some people even invert the character “fu” to signify that blessing has arrived because “inverted” is a homonym for “arrive” in Chinese 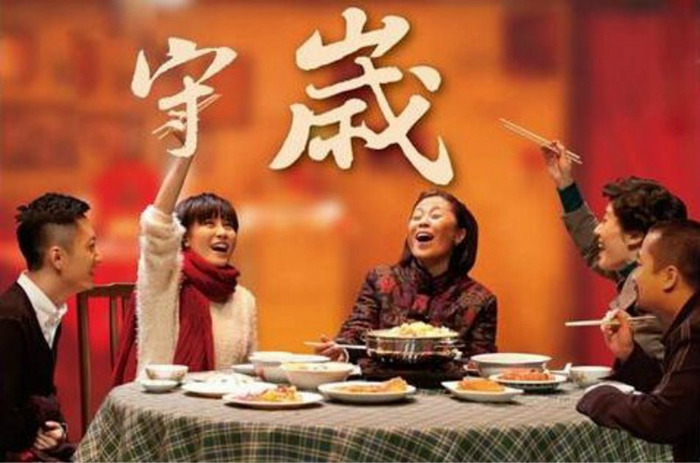 The tradition of staying up late to see New Year is originated from an interesting folk tale. In ancient China there lived a monster named Year, who was very terrible. Year always went out from its burrow on New Year’s Eve to eat people. Therefore, on every New Year’s Eve, every household would have supper together. After dinner, no one dared go to sleep and all the family members would sit together, chatting and emboldening each other. Gradually the habit of staying up late on New Year’s Eve is forward. Thus in China, “Cerebrating the Spring Festival” is also called “passing over the year”.

The New Year’s Gala is a variety show held by China Central Television since 1983. For every year at the turn of the Lunar New Year, the program begins at 8:00PM and lasts five or six hours. For over twenty years, its value has gone far beyond a variety. 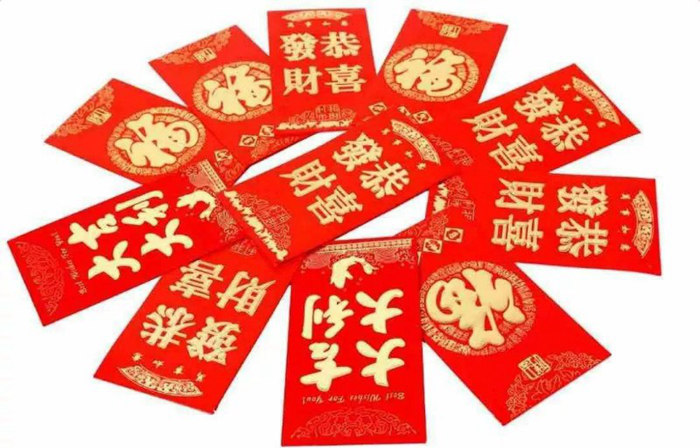 From newborn babies to teenagers, luck money will be given by seniors, wrapped in red packets in the hope of dispelling evil spirits from the kids. CNY 100 to 500 notes are commonly sealed in a red envelope, while there are big ones with up to CNY 5,000 especially in the rich southeast regions. Besides a small disposable amount, most of the money is used to buy the kids toys, snacks, clothes, stationery, or saved for their future educational expenditure. Read more about Red Envelope. 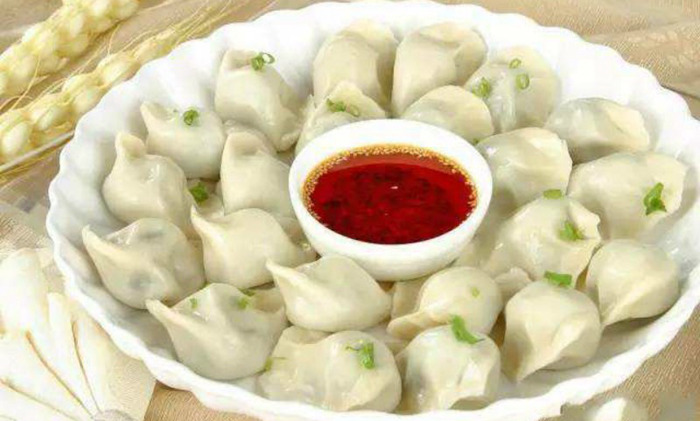 For people from northern China, the dumpling is a must-have on the dinner table on Chinese New Year’s Eve. The shape of the dumpling resembles the gold ingot from ancient China. So eating dumplings means a wish for treasure and good fortune. 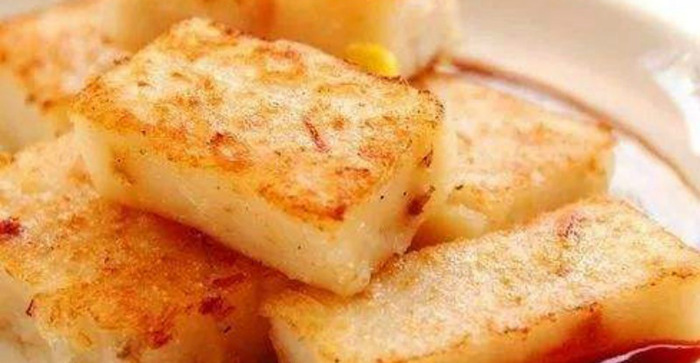 Made of glutinous rice flour, rice cake has been in Chinese cuisine since the Spring and Autumn Period (770-476 BC). Gold and white rice cakes become the symbols of gold and silver. And the Chinese character for cake is gao whose homophonic means growth, improvement or greater accomplishment.

On Lunar New Year’s Eve, all family members get together to have a big meal. The way of cooking fish and chicken may vary across China, but the symbolic meaning of these two dishes is always brimful happiness and good fortune.