Yangguan was a line of defense along the famous Great Wall of the silk road, but it meant a sad parting, as people would send their relatives off here with famous verses. Among them, the most famous is ‘Oh, my friend, I sincerely entreat you to have another cup of wine; you will see no more friends west out of the Yangguan Pass’, by Wang Wei, a famous poet in Tang Dynasty. 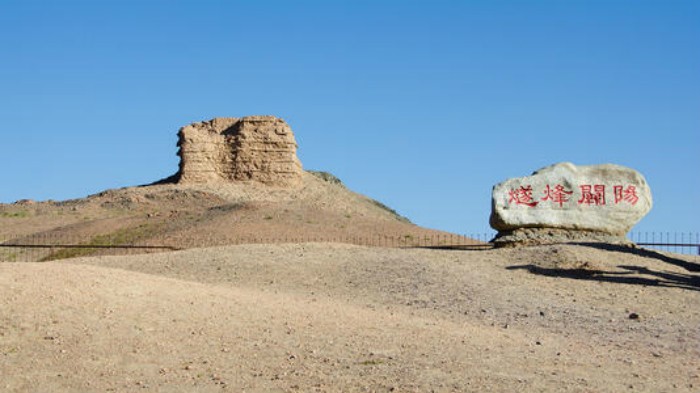 During the western han dynasty (206 bc-ad 24), it was one of the two main fortresses on the western border (the other was yumen pass). In order to consolidate the frontier defense, emperor wu originally ordered it built.

Yangguan and yumen pass are also trade gateways for central and western China. They witnessed the prosperity of the silk road, the world’s oldest trade route. In the tang dynasty, it celebrated the return of xuanzang, a monk commissioned by the imperial court to obtain the original texts of buddhist sutras from the west. It disappeared from view during the song dynasty (960-1279) and Ming dynasty (1368-1644).

Yang means the sun in Chinese. Due to geography, most of the sun in China shines on the southern terrain. Therefore, people use “Yang” to mean the south. Located to the south of yumen pass, people call it yangguan.

It is separated from yumen pass by a 40-mile (64-kilometer) wall with 10 beacon towers every three miles (5 kilometers). Today, much of yangguan lies beneath shifting sand dunes. Only the beacon on the top of the hill survived.

It is the entrance to the entire scenic area, located 870 yards (796 meters) north of the lonely beacon tower on dundun hill. There are nearly 4,000 exhibits related to the “yangguan, yumen pass” and “silk road”, including bronze, iron, jade, fabric and weapons. It was more of a model city for the pass than a simple museum, with gateways, generals’ offices and barracks scattered throughout the area.

Once you’re out of the museum’s gate tower, the 870-yard (796-meter) thoroughfare will take you to the site of the pass. The name of the road translates into a bright and happy future, carrying the best wishes of family and friends. You can ride through it on horseback, on a donkey cart, or on a sightseeing bus. Tickets are 40 yuan, 20 yuan and 10 yuan per passenger.