The great hall of the people is located on renmin road in central chongqing, across from people’s square from the chongqing three gorges museum. It stands majestically in the center of the city and is the landmark of the city, considered one of the top ten cultural symbols of chongqing. Seen from a distance, the great hall towered into the sky. 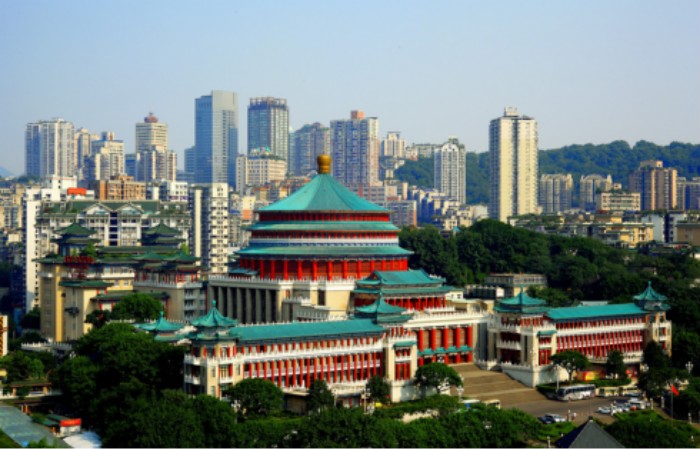 The great hall of the people in chongqing enjoys a high reputation both at home and abroad for its unique architectural style. It is mainly in the Ming (1368-1644) and qing (1616-1911) styles, combining western architectural styles. The hall consists of two parts: the upper part is modeled after the temple of heaven in Beijing, which means blessing and peace; The lower half is a row of thick columns.

At first glance, visitors are captivated by the grandeur of the building amid the lush woods. The bright contrast between the green glass dome and the bright red pillars made the venue even more gorgeous. As you get closer to the building, you’ll notice that its columns and other structural elements are elaborately carved. In addition to the conference hall, there are hotels, entertainment rooms, banquet hall and other supporting facilities. So far, the hall has hosted more than 100 Chinese leaders and dignitaries from other countries. It is also a theatre.

In 1951, under the leadership of marshal he long, an auditorium was built in chongqing to receive guests from home and abroad. Completed in 1954, it was named the great hall of the people in chongqing in 1955. At the turn of the 21st century, people’s square’s musical fountain and evergreen meadow were built before the hall. The square is popular with laid-back locals. They usually do sports in the morning and take a walk in the square in the afternoon. It was especially lively in the evening, with many people dancing happily.

The roof of the great hall of the people is decorated with colorful neon lights, providing an excellent opportunity for night photography. If you want a panoramic view of this magnificent hall, the three gorges museum across the street is the best place to go.