First built in 1442 during the Ming Dynasty (1368-1644), the Ancient Beijing Observatory is located off the Chang'an (Everlasting Peace) Avenue near the Beijing Railway Station. Renovated in the early 1980s and reopened to the public in April 1983, it is one of the oldest observatories in the world.

After successfully overthrowing the Northern Song Dynasty (960-1127) in 1227, the Jin rulers moved the astronomical instruments in the capital at Bianliang (today's Kaifeng, central China’s Henan Province) to Beijing (then called Zhongdu, meaning Central Capital) and installed it in the Jin Chief Astronomer's Observatory. In 1279, when the Yuan Dynasty (1279-1368) defeated the Jin Dynasty (1115-1234), it established its capital in Beijing and built a new observatory just north of the site of the present-day structure. The instruments of the observatory were designed by Wang Xun and Guo Shoujing and built by Nepalese craftsman Arniko. For the last 500 years, they served virtually unchanged as the basis of astronomical work. 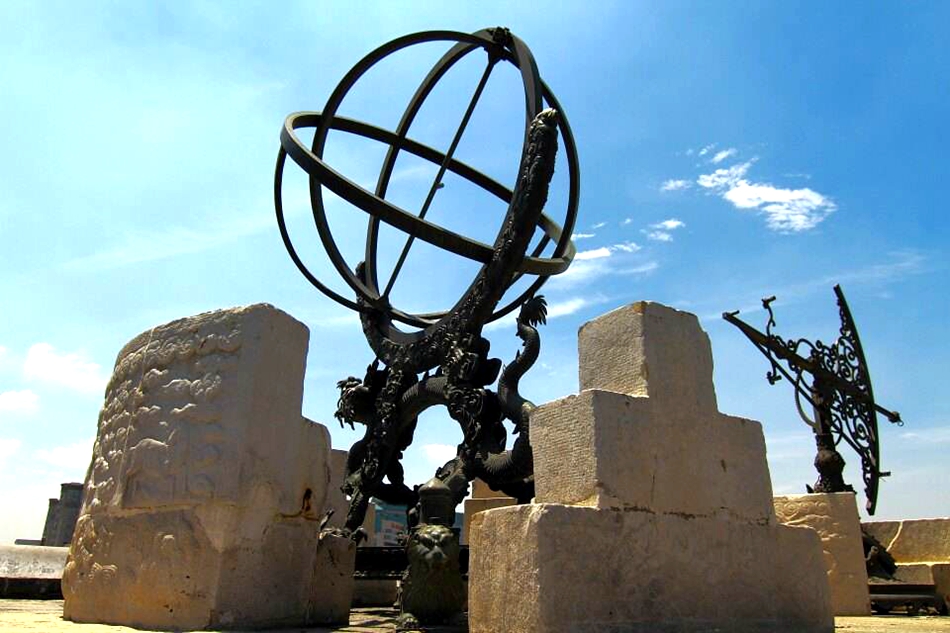 In 1368, Zhu Yuanzhang, the first Ming Emperor, moved the capital to Nanjing, and brought these astronomical instruments with him. In 1403, the third Emperor of the Ming Dynasty Zhu Di took power. And he moved the capital back to Beijing later in 1420. He did not dare to move these instruments because the tomb of the first Ming Emperor was in Nanjing. Instead he sent some artisans to the city in 1437 to make wooden copies of the Song armillary sphere and the Yuan guibiao (a type of sundial) and abridged armilla (a simplified form of the armillary sphere). A new set of bronze instruments was then cast in Beijing modeled after these wooden copies.

In the meantime, a new observatory was built on the site of the water tower to the southeast of the old capital. During that period, the Ancient Beijing Observatory was expanded to its present scale and layout, equipped with some traditional instruments, such as the armillary sphere, the abridged armilla, and the celestial globe on the observatory platform, as well as the guibiao and the water clock below the platform.

When the Allied Forces of Eight Powers aggressed upon Beijing in 1900, they looted everything at the observatory. Many astronomical instruments, including the equatorial armilla, the ecliptic armilla, the azimuth theodolite, the quadrant and the abridged armilla, was shipped to the French Embassy to China in Beijing by the French troops. In 1902, pressed by the international society, the French authorities returned these astronomical instruments to China. However, the Ming made armillary sphere, and Qing made armillary sphere, and Qing made celestial globe, armilla, azimuth theodolite, and the sextant were looted by the Germans and taken away to Berlin. Until 1921 these instruments were returned to Beijing after World War I in compliance with the Versailles Peace Treaty.

In 1931, as the Japanese militarists launched a large-scale invasion to North China, a year later, for the sake of the cultural relics, Chinese scientists shipped some of the instruments to Nanjing. Today you can find them displayed at Purple Hills Observatory and Nanjing Museum respectively.

Nowadays, if you climb it from right to left on the platform of the Ancient Beijing Observatory, you will see many astronomical instruments, such as an armilla, a quadrant, a celestial globe, an ecliptic armilla, an altazimuth, an azimuth theodolite, a sextant and an equatorial armilla. The brick terraced observatory is consisted by a 17-metre high platform. The top of the platform is 23.9 meters from west to east and 20.4 meters form south to north.

From 1442 in Ming Dynasty to the year 1929, Beijing Ancient Observatory has a 500-year history of being a successive astronomical observation. It is a historical site with the longest successive observation period amongst the current existing ancient observatories in the world. In addition, due to its integrated building and completed equipment, it earns high reputation in the world.