Yonghegong Lamasery is a well-known lama temple of the Yellow Hat Sect of Lamaism, which is located at the northeast part of Beijing. It was originally built in 1694 as the residence of Emperor Yongzheng of Qing (1644-1911 A.D.) before his ascent of the throne. And after his death, it was renamed Yonghegong. His successor Emperor Qianlong then rebuilt Yonghegong into an imperial palace with its turquoise tiles replaced by yellow tiles (yellow was the imperial color in the Qing Dynasty). In 1744, it became a lamasery. From then on, large numbers of monks from Mongolia and Tibet and national center of lama administration live in there.

As an imperial palace, the layout of the temple differentiated from other temples. The main gate faces to the south. There are five main halls and annex connected by courtyards on its 480-meter-long north-south axis, including a glaze-tiled arch, Gate of Peace (Zhaotaimen), Buddha's Warrior Hall (Tianwangdian), which was formerly the entrance to Yongzheng's imperial palace, Hall of Harmony and Peace (Yonghegong), Hall of Everlasting Protection (Yongyoudian), Hall of the Wheel of the Law (Falundian) and Pavilion of Eternal Happiness (Wanfuge). 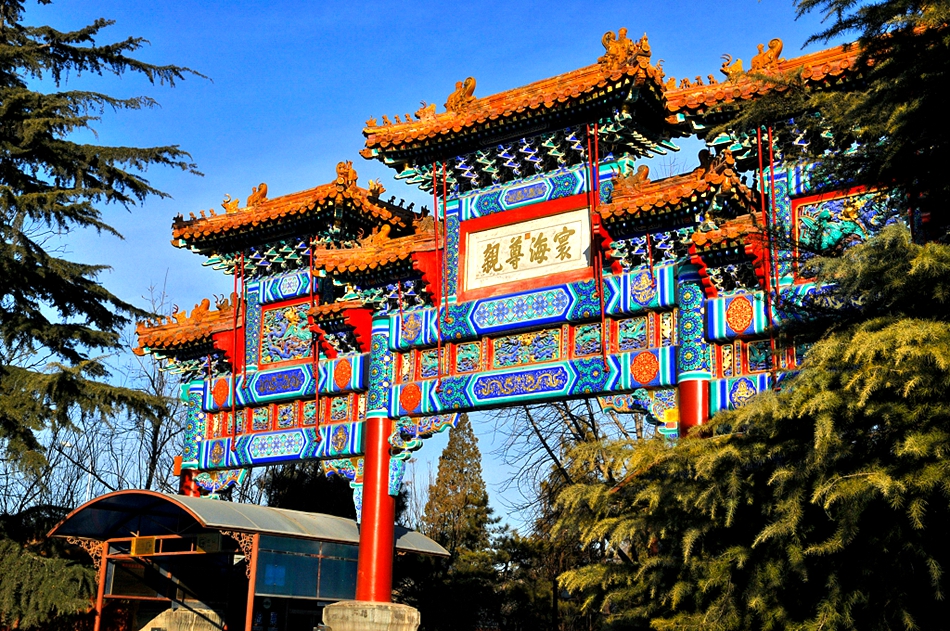 When you are walking through the grand glaze-tile arch patterned with decorative dragons and flowers in the first court, you will reach a three-arch gate - the Gate of Peace. In ancient times, the central passageway was for emperors. On each side of the second court next to the Gate of Peace stand the Bell Tower and the Drum Tower. Two pavilions stand symmetrically on opposite to the north. If you want to know more about the temple's history, you can have a look at the inscriptions of Chinese, Manchu, Mongolian and Tibetan engraved on steles.

The Buddha's Warrior Hall, also known as the Hall of Heavenly Kings, is the former entrance to Yongzheng's imperial palace. The hall Maitreya (Happy Buddha) was always used to greet visitors, which has a smiling face with a sandalwood pagoda on each side. Many small Buddhist images, symbolizing longevity, stand on the pagoda. Therefore, the pagoda is the Longevity Pagoda. There are four fearsome-looking Heavenly Kings or Celestial Guardians on both sides of Maitreya's shrine.

On the way to the Hall of Harmony and Peace stands a marble-based bronze incense-burner. With decorations of two dragons playing with a pearl on its six opens, it is 4.2 meters in height. Afterwards there is the Mount Sumeru, a bronze sculpture of Ming (1368-1644A.D.), representing the center of the world. On the top of it there lies a legendary paradise where Sakyamuni and men of moral integrity live after death; in the middle the dwellings of humans and below devils abide in hell.

The Hall of Harmony and Peace is formerly a place for the emperor Yongzheng to hold meetings. It was also called Mahavira Hall or Daxiongbaodian in Buddhism. Mahavira here is an honorable title of Sakyamuni in Chinese. Sakyamuni is on the altar, with Buddha of the Present in the middle with Buddha of the Past Yeja and the Buddha of the Future Maitreya on each side. On each side of the hall stand Statues of 18 Arhats. It is said that 18 Arhats were the disciples of Samkyamuni to diffuse Buddhism. The painting that you can find on the western wall is a Bodhisattva.

The Hall of Everlasting Protection (Yongyoudian) and the Hall of the Wheel of the Law (Falundian) are right behind the Hall of the Harmony and Peace, where enshrines a bronze image of Tsong Kapa -- founder of the Yellow Hat Sect. With 5 gold-plating pagodas, the golden-roofed Falundian was the place where lamas assemble to have religious activities. There is a 6-meter-high gilded bronze statue of Tsong Kapa on a lotus seat in the center of the hall.

Now there are nearly 70 lamas living in this temple. If you go there, you will find that regular religious activities are still practiced. More lamas can be seen coming here in the festival for lamas or Lamaism.