The numerous old hutongs are the distinguished features of Beijing. They symbolize the traditional community with small lanes, alleys and Siheyuan (quadrangle). The life of local people in these old hutongs makes this ancient capital look more charming. Wandering along these small lanes, you can see many quadrangles, called Siheyuan in Chinese, which are the residential quarters of natives. No one knows the exact number of these hutongs there are in Beijing.

It is recorded that about 3,000 years ago, there first appeared a small city in the Beijing area. Beijing did not become the capital city for the first time until the Jin dynasty in the 12 century. At that moment, there were just streets and roads but no hutongs in Beijing. According to the historical records, the word "Hutong" originated from the Mongolian language, which meant "water well." In other words, it means a place where people live, because people always gather where there is water. As the traditional residence of Beijingers, hutongs which were composed by rectangular courtyard surrounded by one-storeyed tile-roofed houses are usually one to six meters wide. Since hutongs were first built in the Yuan Dynasty (1271-1368), they are where life was going on for the last 700 year. 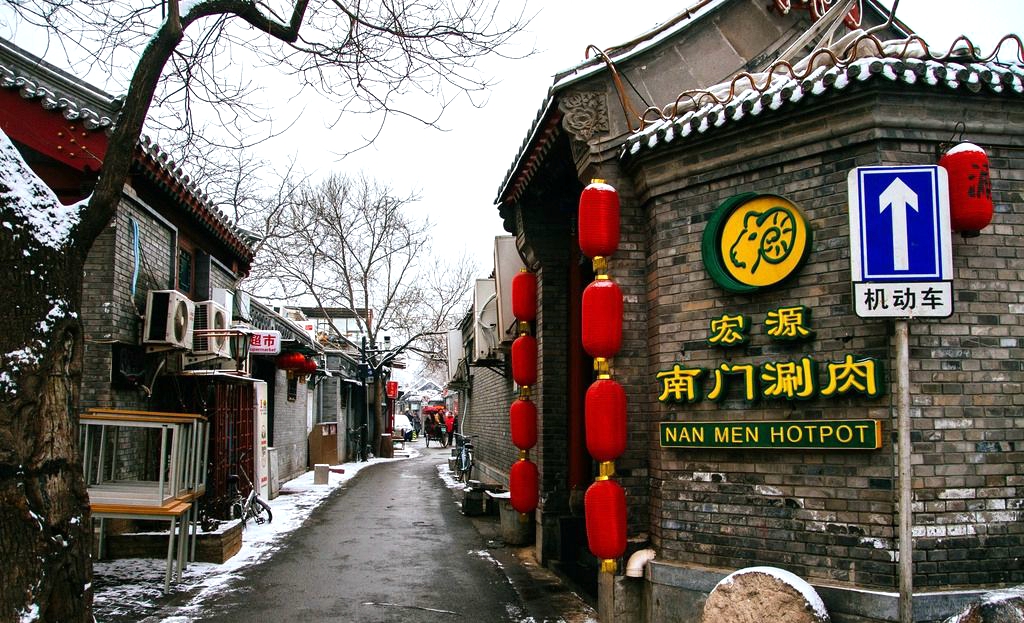 The grandson of Genghis Khan--Kublai Khan set up Yuan Dynasty after his occupation of Beijing in 1260. Kublai Khan wanted to set Beijing as the capital city, but it was destroyed during the war. So he ordered to rebuild it. The buildings in the hutong were mainly quadrangles, which were in different size and design according to the social status of the residents. It was the favorite of the high-ranking officials and wealthy merchants to big quadrangles with roof beams and pillars all beautifully carved and painted, each with a front yard and back yard. However, the quadrangles of ordinary people's were simply built with small gates and low houses. Actually, Hutongs are passageways formed by many closely arranged quadrangles of different sizes. For better lighting, the specially built quadrangles all face the south; therefore, a lot of hutongs stretched from east to west. And for convenient passage many small ones between the big hutongs went north and south.
Most of the hutongs today were those built in the Ming and Qing dynasties. But you can still find some from the Yuan Dynasty. For example, the Zhuanta Hutong in Xisi on the west side of the city is a typical one. It was often mentioned in the Yuan dramas.
Throughout the last 7 centuries, as the city grew, more and more hutongs appeared. But this time they were different from the old ones. During the Qing Dynasty in the 17th century, the Manchu people who used to live in North China ruled the country. After they subverted the Ming Dynasty, they divided Manchu people into eight banners.
Each of them was featured by a different color. As the population grew, the city had to expand. So with all the banners, the Manchu people lived in the inner city. In Han dynasty, whether people are in high ranking or low one, they were driven to the outer city. Random houses were built, thus appeared a lot of hutongs.
From then on, there are many hutongs with different shapes, lengths or directions in Beijing. The shortest hutong in Beijing is just 10 meters in length, and the narrowest one is only about 40 centimeters in width. There are more than 20 turns in some hutongs. And due to the terrain, there appeared slanting Hutongs. Most of the hutongs stretch straight from east to west, some from north to south. As a result, it needs the need of houses to face south to take in more sunshine and resist cold wind from the north.
In the past, the transportation in hutongs was inconvenient. Thus street peddlers began to emerge. They wandered from lane to lane selling all kinds of goods or providing various services. People could know what they are selling from their singing or the sounds of their special instruments. The peddlers are among the first to come to sell food at sunset. The foods they sold include Youzhagao, which is deep-fried twisted dough sticks, baked pancakes, seasoned millet mush etc. Later, peddlers who sold vegetables of daily necessities appeared. A barber never shouts, his instrument is a big pair of scissors and an ironing stick. But now such melodious cries of sounds are rarely heard.
Beijing's hutongs are both an appellation for the lanes and a kind of architecture, which are the living environment for the local people. It is the reflection of the vicissitude of society. Most of the hutongs are seemingly the same with grey walls and bricks. Hutongs are a happy place. Usually, there are 4 to 10 families with an average of 20 people sharing the rooms of one courtyard complex. If you live in hutong, you can enjoy a life of friendly and interpersonal communication. Children living in one courtyard can play together. And when growing up, they are just like one family. For the old people, they can enjoy the companion with each other.
Nowadays, hutong tour has become very popular, which is really joyful. If you are interested in this tour, you can try the rickshaw, an old way of conveying passengers, to experience the small, but old alleys. Here, you also have the opportunity to visit one local market with all kinds of fruits and vegetables. Ask your guide to arrange a lunch at the locals' house if possible, and you will have the chance to tasting the local food. Meanwhile, you can chat with the host and hostess and know more about the local people's special life.
Tour Options
1
Popular Beijing Tours
2
Private Great Wall Hiking
3
Small Group Great Wall Hiking
4
Tours from Beijing to Neighbors
5
China Tours included Beijing
6
Other China Tours
Beijing Guide
1
Beijing in Brief
2
Beijing Transportation
3
Eating in Beijing
4
Shopping in Beijing
5
Entertainment in Beijing
6
Beijing Travel Tips
7
Beijing Tour Maps
8
Beijing Q & A