The Palace Museum, the imperial palace in the Ming and Qing dynasties, is the largest and best-preserved palace complex in the world today. It is also called the Purple Forbidden City in Chinese. Its name, on one side, derives from ancient Chinese astronomers' belief that God's abode or the Purple Palace. The pivot of the celestial world, is situated in the Pole Star (the middle of the Ziwei Star), at the center of the heaven. Therefore, the son of God of Heaven--the emperor, should live in the Purple City. On the other side, without special orders of the emperor eunuchs and guards, ordinary citizens were not allowed entering the Forbidden City, except for palace maids. For this reason, palaces in the Ming and Qing dynasties are called both the Forbidden City and the Purple City. 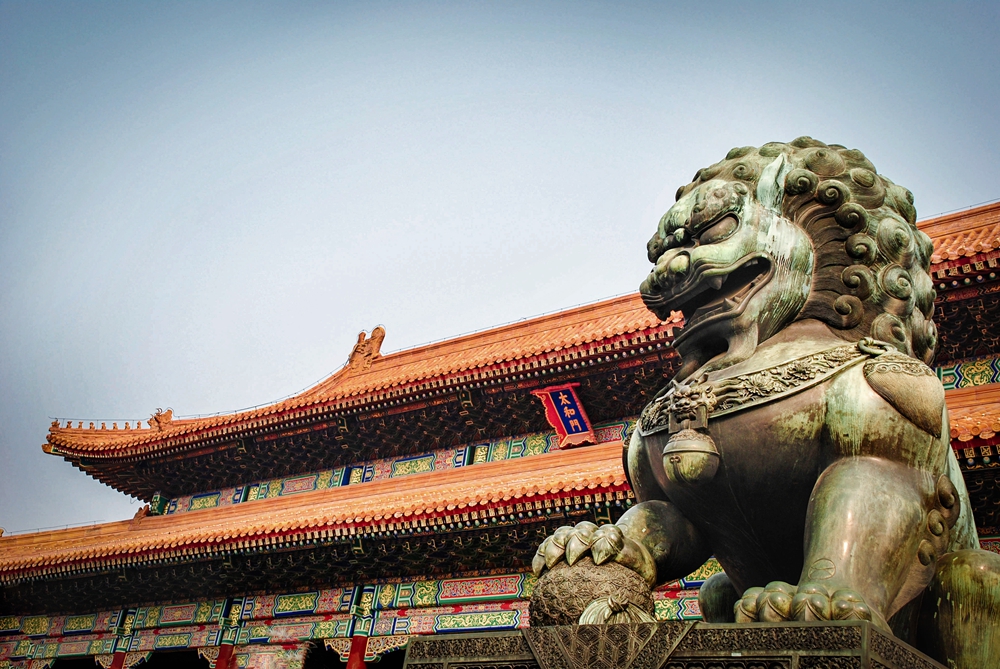 The Construction of the magnificent palace started in 1406, and ended in 1420. It took 14 years to complete the project. One year after completion, Emperor Yongle moved his capital from Nanjing to Beijing. Since then, 24 emperors have lived at the Forbidden City, 14 during the Ming Dynasty and 10 during the Qing Dynasty.

The Forbidden City covers an area of over 720,000 square meters, 750 meters wide and 960 meters long. And it has four great gates. The fabulous city, which is surrounded by a 52-meter-wide moat, has four delicate and lovely turrets overlooking both the inside and outside.

The Forbidden City has more than 8,700 wooden rooms, most of which have yellow-glazed tiles. It is a color that only emperors were allowed to use on their roof. From the northern Drum Tower and the Bell Tower to the Southern Gate of Everlasting Stability (Yongdingmen), these colorfully painted and embellished rooms are divided symmetrically into northern and southern halves. If you walk into the city, you will see the layers of halls and palaces spreading out on either side of a central axis. As the designations of the wise architectures, the splendid buildings represent the unique features of the traditional Chinese architecture and embody the incredible creativity of the ancient Chinese people. Reconstructed after being destroyed by several fires, this pearl of Chinese cultural heritage still retains its original arrangements of the Ming dynasty. Nowadays, most of the existing buildings open to visitors were reconstructed during the early Qing Dynasty.

In many ways the Forbidden City reveals ancient Confucian ideas, as it is generally designed to the principles of the Front court, Rear Market, Ancestral Sacrifice on the left and Altar on the right. Hence, the court was located in the southern or front section of the Forbidden City, where officials discussed political affairs. A large trading market was situated in the rear part of the city, providing daily necessities for the court. On the left side was the Imperial Ancestral Temple, where the emperor offered sacrifices to his ancestors. Nowadays, it is the Working People's Cultural Palace. On the right side was the Altar to the god of Land and Grain, where the emperor displayed his reverence to the god. This is now Zhongshan Park.

There are two courts in the Forbidden City: the Inner Court and the Outer Court. They are separated across the middle between the south and north ends. The Outer court is mainly composed by the Meridian Gate and the Three Front Halls, flanked by the Hall of Literary Glory (Wenhuadian) and the Hall of Martial Spirit (Wuyingdian), which witnessed various ceremonies and political activities during the Ming and Qing dynasties. While the inner court is mainly consisted by the Three Back Halls, Imperial Garden, Hall of Mental Cultivation and Palace of Abstinence, which are flanked by the Six East Halls and the Six West Halls. This was the place where the emperor was confronted with political affairs and was the residential area for the emperor and his empresses and concubines.

Compared with other contemporary palaces, the Forbidden City stressed more on balance and independence, and embodied more cultural perspectives of the specific ethnic group. Just as what was written in the book of History of Chinese Science by Joseph Needham, each part of the Forbidden City is in well balance and independence, which is just on the contrary to other palaces in the Renaissance Age. For the city, the Palace of Versailles is just acting as an object. The palace is an organic part of the whole city, combining deep deference to nature with lofty significance. As a tin far-reaching and complicated Chinese architecture, Great overall arrangements have reached the highest level, far above any other culture.

After the subversion of the Qing Dynasty by the Revolution of 1911, the last emperor Pu Yi was exiled to palaces at the rear of the Forbidden City. In 1914, the Three Great Halls in the Imperial Palace was opened as exhibition hall of antiquities. Ten years later, Feng Yuxiang staged a coup in Beijing and expelled the last emperor from the palace. Oct. 10, 1925 established The Palace Museum. And in 1961, the Forbidden City was listed as a place to be given special protection by the State Council. UNESCO listed it as World Cultural Heritage site in 1987.

The Forbidden City, as one of the world-famous royal palaces, has played an important role in the world architectural history. Many tourists both from home and abroad have been attracted by the almost 1 million rare treasures and cultural relics on exhibition there.