The Temple of Heaven stands in the southern part of Beijing. It was used to be the house ceremonies of emperors of worshipping heaven and praying for harvest in the Ming and Qing dynasties. This altar temple remains to be the largest existing ancient sacrificial structures across the world, more important than other three major temples, i.e. Altar to the Earth, Altar to the Sun and Altar to the Moon.

The Temple of Heaven was built in 1407 and the construction of the project took 14 years. Covering an area of 273 hectares, with two surrounding rings walls, it is four times bigger than the Forbidden City. The wall, stretching from north to south, is as long as 1,657 meters and that from east to west 1,703 meters. The outer wall is 6,553 meters in circumference while the inner wall measures 4,152 meters in perimeter. 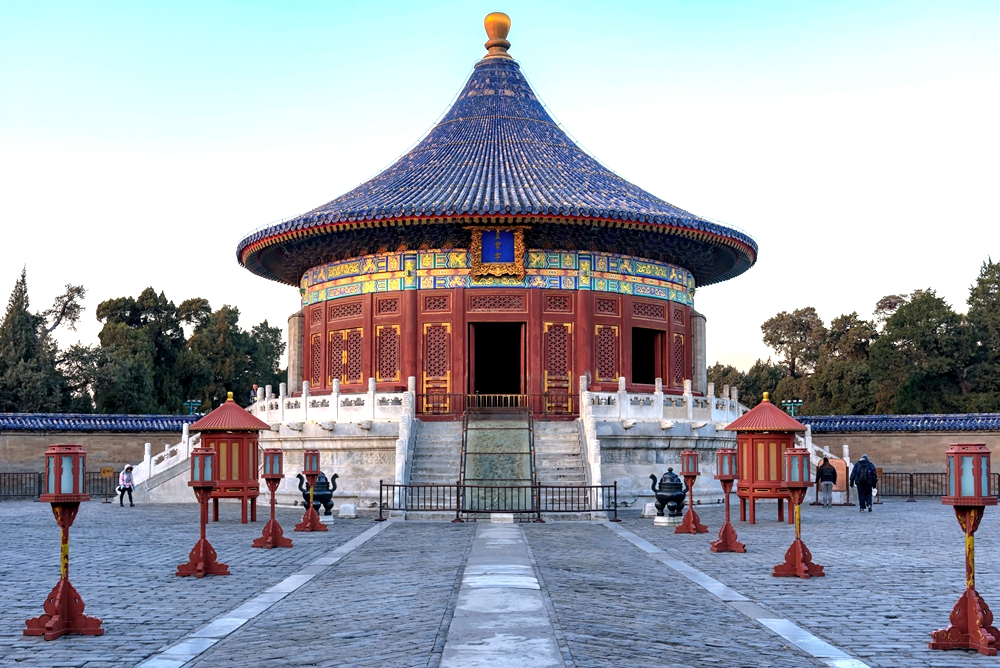 The Temple of Heaven is consisted by three sections, named the Circular Mound Altar, the Imperial Vault of Heaven and the Hall of Prayer for Good Harvests, attached with some affiliated buildings like Dressing Platform, Long Corridor and Echo Wall.

The Circular Mound Altar was first constructed in 1530. In ancient China, to some extend, the altar was a place that even more important than the Hall of Prayer for Good Harvests. The emperor would come to offer sacrifices to heaven on the altar every year on the day of the Winter Solstice. For this reason, the altar was rebuilt into a circular one in 1749. Built in the open air without shelter, the sacrificial ceremony was being held right under heaven. Therefore, it was called "Luji", or the "open air offering of sacrifices".

The Imperial Vault of Heaven was first built in 1530 as a main building in the south of the Temple of Heaven. At first, it was called "Taishendian" or the Hall for Pacifying Gods, but later changed into the present name. In 1752, the building was rebuilt into one of a single eave, which used to have double eaves. Standing 19.5 meters high and of 15.6 meters in diameter, the circular hall used to be an octagonal one in the past. The tablet of the Jade Emperor, the four stone platforms on both sides used to be for the tablets of the emperor’s ancestors of eight generations in succession, is consecrated on the central stone-platform in the Hall of Imperial Vault of Heaven.

Being of 32.72 meters in diameter, built on a three-tired platform, the Hall of Prayer for Good Harvests towers 38 meters' high with its eaves fanning out on three tiers, of which the upper one has a gold-plated knob on it. You will be amazed to see that such a heavy building was supported only by 28 wooden pillars with no single piece of reinforced concrete at all. The whole building was built by mortise and tenon joints without using a single nail. With each pillar in height of 19.2 meters, the four pillars in the center of the hall are called "Longjingzhu"--the Dragon Well Pillar. Only by joining hands together by two and half persons, can it be embraced. These four pillars indicate the four seasons of a year. You may find it more interesting that all pillars have their special meanings: the outside 12 pillars suggest 12 months in a year and another 12 pillars in the round wall symbolize the 12 two-hour periods of a day. And when you put the two 12 pillars together, the number you get is 24, which represents the 24 solar terms of a year. And when you add the four in the center of the hall to 24, you will get 28, which represents the 28 lunar mansions in the heaven above.

Since its first construction in 1420, the Hall of Prayer for Good Harvests has gone through several times of changes. At that moment, the hall was called "Dasidian"--the Hall of Grand Sacrifices, which was rectangular in shape. But in 1529, it was reconstructed into a round one with a roof of three tiers. And this time it was named "Daxiangdian"--the Hall of Grand Treatment to Heaven. Three different colors were painted in these roofs of three tiers. From the upper tier to the lower one, the colors are respectively blue, yellow and green. In 1752, these three colors were all changed into glazed tiles of dark blue. However, they were destroyed by lightning in 1889. And later in 1890, it was restored according to the original. In 2006, the whole building was renovated with all its paintings according to the same style as they done last time. The Hall of Prayer for Good Harvests has become the symbol of Beijing.

At present, the Temple of Heaven is very popular with tourist home and abroad. It is also an entertainment center for local people. If you go to the temple early in the morning, you will find many local people practicing Taiji, playing cards and Chinese chess and singing folk songs there.