Located next to the Yu Garden and also known today as the Yu Garden Market, the City God Temple was built in the fifteenth century during the Ming Dynasty. Originally a temple built to honor the Han statesman Huo Guang (68 B.C.), it is a busy market today, specializing in traditional arts and crafts. Outside, however, it still looks like a temple. 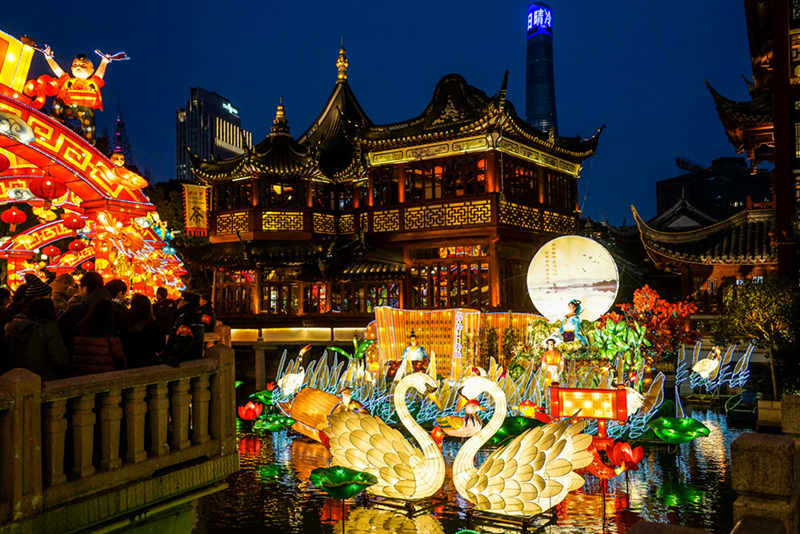 It was originally the Jinshan God Temple, dedicated to the spirit of Jinshan, or 'Gold Mountain', an island off the coast of Shanghai. It was converted into a City God's Temple in 1403 during the Yongle era of the Ming Dynasty (1368 - 1644), thus it is an old temple with the long history of about 600 years. When it was initially finished, it was small in size. Several additions and enlargement were made during Ming and Qing (1644 - 1911) Dynasties. When at its prime time, the coverage of the temple reaches up to 49.9 Mu (8.2 acres). Chenghuang Temple became very prosperous during Qing Dynasty. The popularity of the temple also led to more business to be set up in the area, turning the surrounding streets into a busy marketplace. Local residents and nearby visitors all thronged here in quest of their necessities, boutiques, jewellery. The present temple covers an area of more than 10,000 square meters including the Huoguang Hall, the Yuanchen Hall, the Caishen Hall, the Cihang Hall, the Chenghuang Hall and the Niangniang Hall.

One hundred years ago, as more and more pilgrims came to worship in the temple and pray for peace and fortune, many peddlers began to open shops near the City God Temple. Slowly, a popular, old-fashioned market came about.Shanghai residents enjoy shopping here; they can find things unobtainable elsewhere and they dine at their favorite restaurants.