Situated to the west of Jingshan Park, the history of Beihai Park can be traced back to the mid-eleventh century about 1,000 years ago when a temporary royal residence named "Yaoyu" was initially built here during the Liao Dynasty. As the rulers of the Jin Dynasty started to dig a lake here, the island was then embraced by water. It was opened to the public as a park in 1922.

Covering an area of over 700,000 square meters, the Beihai Park consists mainly of two sections: the Lake of Beihai and the Qionghuadao—the Jade Flowery Islet with the water to an average depth of 2 meters around it. More than half of the park is occupied by the water surface.

In the ancient times, commoners were forbidden to enter the garden. It was built particularly for royal families. In the art of gardening the layout of the Beihai Park is centered round the Jade Flowery Islet. With water on three sides, the white pagoda has row upon row of stylish buildings and pavilions around. You may have a poetic sense of beautiful paintings on the islet. 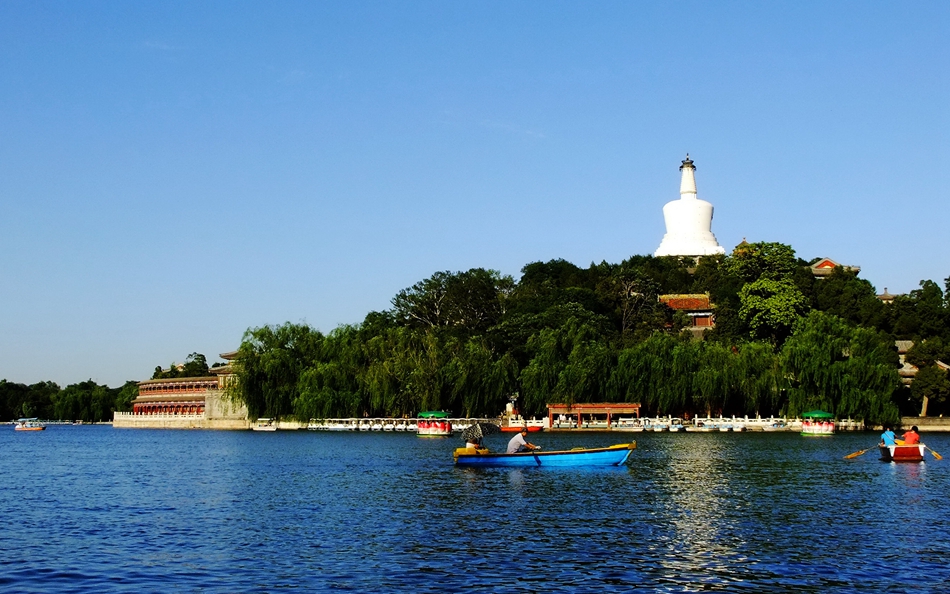 Follow the river, you can find that the water in the lake comes from the Jade Fountain Stream in the western hills. The water first pours into the Kunming Lake and it then flows southward by way of "Jishuitan"—the Water Accumulation Pool and "Shishahai" before it finally empties into the "Three Seas", called the South, Middle and North seas.

Built in 1651 of the Qing Dynasty, the Five-Dragon Pavilions were located by the north shore of the lake. The Dragon Pool Pavilion, in the middle of the five pavilions, used to be the angling perch for the emperor and the other four on the east and west was for officials and officers to keep his company. The rulers used the Five-Dragon Pavilions both for angling and for enjoying the mid-autumn moon and the display of fireworks on festival days. In addition, in the past the Grandmother of Emperor Kangxi would come to spend her summer days here in the garden.

Constructed in the period of Emperor Wanli's reign (1573-1619) in the Ming Dynasty, the Nine-Dragon Screen was built of glazed bricks, 5 meters in height, and 27 meters in length and 1.2 meters in thickness. It was decorated with highly glazed curling dragons of the nine on each side. You can see the dragons playing with a pearl and romping over the sea in the sky, each and every of them poses a very graceful posture. It looks vivid and lifelike. Besides, there are also dragon patterns on the main ridge and the slanting ridges and eave-tiles, totaling 635 in number. In china, there are three large-sized nine dragon screens: the one in Datong, Shanxi Province is the largest, that in the Beihai Park the best preserved and still another inside the Forbidden City, all with a history of over 200 years.

Situated at the north side of Qionghuadao, there is a restaurant named "Fangshan Restaurant", which imitates Cuisine of Imperial Family. "Fangshan" here means that it provides foods and vegetables that imitate those were cooked in the court kitchen. Well, you can have a taste of the authentic palace foods here. The restaurant was found in 1925 by a worker who once worked in the palace storeroom. Working with him in the restaurant were some cooks who worked in the kitchen in the Qing court. The restaurant was moved to the place where it now stands in 1959. It has won praises from guests home and abroad.

In addition to the above places, you can also find many other interesting places here. It takes probably two hours for you to look around in this park.