Covering an area of 23 hectares, situated directly to the north of the Forbidden City, Jingshan Park is the highest point of old Beijing. The place is a beautiful imperial park which belonged only to the emperors in former times in the Yuan, Ming and Qing dynasties (1271-1911). They used to climb the hill, admire the scenery and eat and drink in the park for entertainment.

There are three gates and many buildings in Jingshan Park, such as Qiwanglou, the Tower of Splendid View; Wuzuofengting, the Five Hilltop Pavilions; Shouhuangdian, the Hall of Imperial Longevity; Xingqingge, the Pavilion of Flourishing Happiness and Yongsidian, the Eternal Cherishing Hall etc. 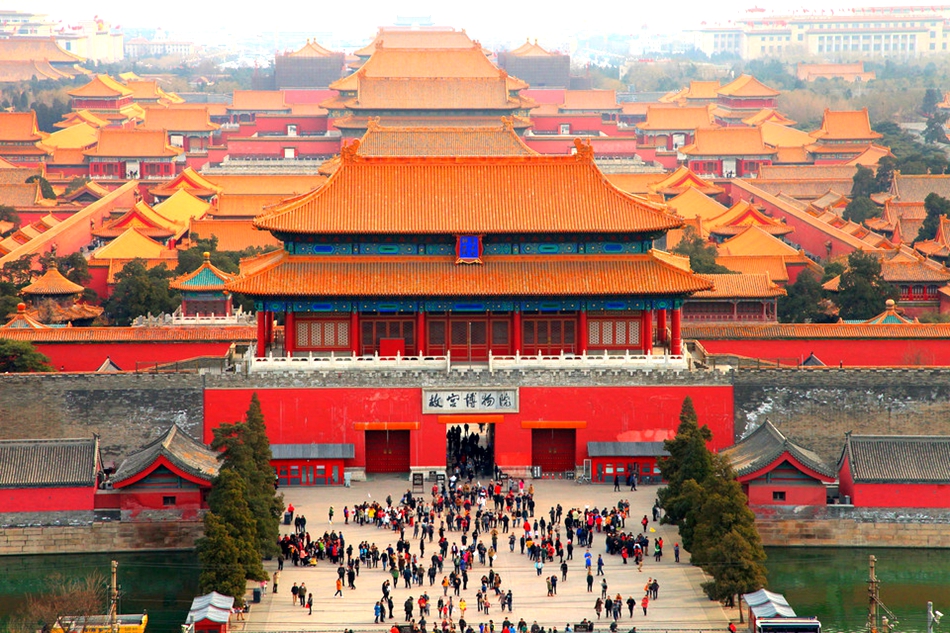 The Tower of Splendid View, which is also called Qiwanglou, is situated north of the Jingshan Gate along the north-south axis. During the period of Emperor Qianlong’s reign of the Qing Dynasty, it was used to be a place for enshrining the Tablet of Confucius when an official academy was opened here.

Right in the middle of the five pavilions on the Coal Hill stands the Wanchunting, the All Time Spring Pavilion, which was erected at the highest point. Set at the centre point of the north-south axis that divides the old city of Beijing into two equal parts, the pavilion is the highest spot of the old city. When you climb to the pavilion and look down, you can clearly see the whole picture of the Forbidden City. Rimmed with green glazed tiles, the pavilion has triple eaves and four up-turned ledges covered with yellow glazed tiles. The pavilion has 32 columns, the outer 20 columns with six of them on each side, and the inner 12 columns with four on each side.There used to sit a gold-plated wooden stature of Vairocana Buddha in the center of the pavilion, which together with a lotus and having a mandala at the back stands 3 meters high. Unfortunately, it was destroyed by the Eight Powers Allied Forces. There are four other pavilions, two on each east and west sides respectively.

The Hall of Imperial Longevity was firstly built in the Ming Dynasty and rebuilt during the period of Emperor Qianlong's reign (1736-1795) of the Qing Dynasty. It stands at the northern foot of hill. Enshrining the portraits of the deceased Qing emperors, the hall was used as a place for offering sacrifices to the imperial ancestors. Standing to the east of the Hall of Imperial Longevity, the Hall of Eternal Cherishing Hall was originally used for housing the coffins of emperors and later for holding those of emperors and empresses. However, it was used for emperors to practice archery in the Ming Dynasty.

It is said that the last emperor of the Ming Dynasty, Emperor Chongzhen committed suicide here by hanging himself in some place at the eastern end of the Coal Hill.

The Government has renovated some of the ancient buildings and built up many new structures for providing services since the founding of People's Republic of China in 1949. Additionally, to restore it to its former beauty, many tall trees have been planted inside the park.

At the present time, you can enjoy many shows that held in the Jingshan Park, such as exhibitions of fish and flowers, notably the beautiful peonies for which the park is famous. And the best time for you to view the more than 200 varieties of peonies here is from late April to mid-May. It is really a feast for your eyes.