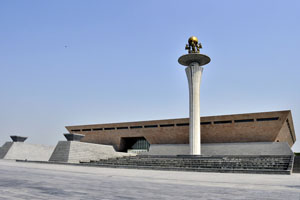 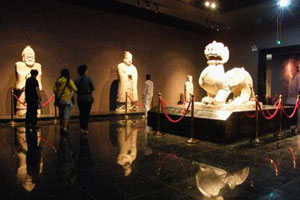 The Luoyang Museum is a local historical museum of China. It was first built in Guanlin, the south of Luoyang City in Henan Province, in 1958, and then moved to the north side of Zhongzhou Road in 1973. The new museum was opened on May 1, 1974, covering more than 200,000 square meters. The roof of the main building is covered with glazed tiles.

The Museum displays 1,700 cultural relics in five exhibition rooms -- a reflection of five different social development stages such as the Primitive Society, the Slavery Society, and the Feudal Society. Among the relics, the bronze wares of the Shang and Zhou dynasties, the pottery-made tomb figures, and the Tang San Cai (Tri-color Glazed Pottery of Tang) are considered to be of the first grade. Besides the basic displays, the Museum also holds exhibitions of calligraphy and paintings and so on every year.

In March, 2009 a new section of the Museum was built in the North of Sui and Tang Luoyang City National Heritage Park, It becomes one of land mark of Luoyang together with Pearl TV Tower and New District Government Building. The new section covers an area of 20 hectares, which consists of main buildings and affiliated buildings. There are one basic display an seven theme display with a collection of 15,000 pieces relics. The site is open to public in April, 2011.