Covering an area of 40 square kilometers with 13 Ming emperors buried, the Ming Tombs is situated at the southern foot of the Tianshou Mountain in Changping District in the north western suburban areas of Beijing. The construction of the imperial tombs had been going on ceaselessly from the year 1409 when Emperor Zhu Di started building his tomb to the fall of the Ming Dynasty in 1644, lasting a period over 200 years.

As many people know, there are 16 emperors in the Ming Dynasty. Among the 16 Ming emperors, 13 of them were buried in this tomb area, except for Zhu Yuanzhang, the founder of the Ming Dynasty who was buried in the Xiaoling Mausoleum in Nanjing, Zhu Yunwen, who disappeared and Zhu Qiyu, who was buried at Jinshan Hill in the western suburbs of Beijing, all other. Therefore, this area was called the 13 Ming Tombs.

It was originally built only for Emperor Zhu Di and his empress, named Changling, which is the most magnificent tomb. The succeeding twelve emperors had their tombs built around Changling. At present, the two tombs opened to the public are Changling and Dingling.

Changling is the first Ming tomb built in this area. Hence, the axle line of Changling naturally became the axle line of the whole Ming Tombs. Along with the various tombs, the Stone Tablet House come together overall as a structurally and visually unified architectural accomplishment. Though these tombs were built in different periods, they were strategically planed and built in different stages. Each tomb has its own distinct adornments. However, the entire tomb area has a unified layout and style.

Zhu Di was the third emperor in the Ming Dynasty, who was buried together with his empress in Changling. During his 22-year of reign, he was, relatively speaking, an emperor who had made quite some achievements. For example, he determined to move the capital from Nanjing to Beijing in 1421. To some extend, the move itself was an expression of far-sightedness, for it was very important to strengthen the national defense and guard frontier areas. During the period from 1405 to 1424, Zheng He, also called Eunuch Sanbao, was sent by the emperor to fulfill a diplomatic mission which was on an ever larger and broader scale in Chinese history. He went six times on board across the sea to over 30 countries in Asia and Africa. 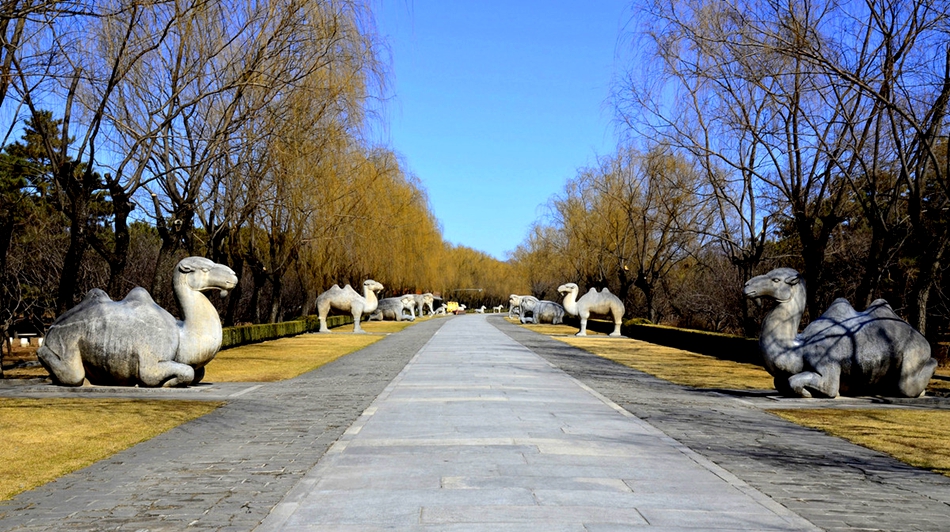 Completed in 1416, as the place for worshipping tablets of the emperor and empress and offering sacrifices to ancestors, the Hall of Eminent Favor is situated within the second compound of Changling. The Hall of Eminent Favor in Changling is the best-preserved among the ones of the 13 tombs, which duplicated the Hall of Supreme Harmony in the Forbidden City. It is a very precious relic of ancient China's wooden structures.

Dingling is the tomb for Emperor Zhu Yijun, named the tomb of Stability. It is said that he was buried together with his two empresses—Xiaoduan and Xiaojing. Ascending the throne at the age of 10, Zhu Yijun was died at 58 with a reign span of 48 years. Therefore he became the emperor with the longest time in power for in the Ming Dynasty. The construction of the Dingling tomb started in 1584. It took 6 years to bring the project to finish in 1590, covering an area of 180,000 square meters and costing 8 million taels of silver.

The Dingling began to be excavated in May 1956, which brought to light the mystery of the underground palaces of the Ming Tombs. Constructed with hard stone-slabs, with a total floor space of 1,195 square meters, the underground palace is composed by five beamless vaults, called the front, the middle, the rear and the two annexes on the right and the left. Carved out of white marble and the rear hall with the bier holding three coffins for the emperor and his two queens, three thrones were laid out in the middle vault. There are over 3,000 pieces of archeological findings unearthed from the tomb.