Covering an area of 290 hectares in total, the Summer Palace spreads out some 15 kilometers away from the city center in the north western suburbs of Beijing. Three fourths of the palace is covered by a pool of water and the rest the land and hills.

The Summer Palace is the summer resort of the Qing royal family. Now it is the most intact, the best-preserved and the largest of its kind of the classical gardens in the country. Since the garden began to be built in 1153, it had undergone many a time reconstruction and renovation in the Yuan and Ming dynasties. In the period of Emperor Qianlong’s reign of the Qing Dynasty, it was still reconstructed in a large-scale. And this time was renamed the "Garden of Crystal Ripples". When it was completed in 1860, it suffered a severe destruction, led by the Anglo-French Allied Army, which brought it down to ashes. In 1886, Empress Dowager Cixi embezzled the funds allocated for the building of the navy to rebuild it and renamed it the "Summer Palace". However, in 1900, it underwent destruction again by the Eight Powers Allied Forces. Later, the1903 saw its second-time rebuild. 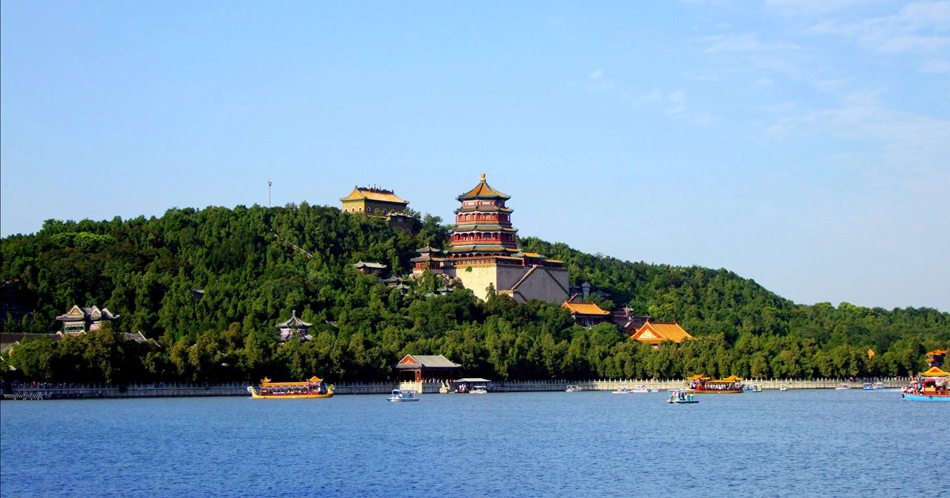 On the 12th of October 1911, Empress Dowager Longyu was finally forced to promulgate the abdication of the royal power. However, according to the agreement between the Qing royal family and the republic government, the Summer Palace would still be kept in the hands of the Qing royal family, while yet to be opened to outside as private property by selling admission tickets. 1924 when Puyi was ousted, the Summer Palace was taken over by the republic government and changed to be a public park.

Through the East Palace Gate, there is the Hall of the Benevolence and Longevity. The emperor used to handle state affairs and listen to reports by ministers and receive foreign envoys in there. It was called the Hallo of Diligent Administration by Emperor Qianlong during his reign. In 1860, it was burnt down by the Anglo-French Army. Reconstructed In 1890, it was then renamed the "Hall of the Benevolence and Longevity". During the reigns of Emperors Tongzhi and Guangxu, Empress Dowager Cixi got the real power to rule the country, and she started to handle state affairs behind the screen.

Consisting of four rooms, the Hall of Happiness and Longevity used to be the residence for Empress Dowager Cixi. The Empress moves to the Summer Palace and stays there in the hall every year on the first day of the fourth month in the lunar calendar. And she won't return until the tenth of the tenth lunar month when she had celebrated her birthday there. In the Summer Palace, there are over 1,000 people dancing attendance on the Dowager. Among them, there are 48 in the Hall of Happiness and Longevity, of whom 20 are maids-in-waiting, 20 eunuchs of importance and another 8 are the "ladies-in-waiting" by her side, normally waiting in the room behind the precious throne to attend on her.

The Long Corridor, the starting point of entertainment quarter, is at the end of the courtyard of the Hall of Happiness and Longevity. It is 728 meters long with more than 14,000 traditional Chinese paintings on the beams and rafters. The four pavilions along the corridor represent the four seasons a year. The Marble Boat can be found at the end of the Long Corridor. The original Chinese style of it was burnt down by the Anglo-French Army in 1860. In 1893, it was rebuilt into one of a western style, imitating a steam ship with two water-wheelers. In 1903 Empress Dowager Cixi built another storey of wooden structure with the decoration of colored pieces of glass. The construction of this immovable boat was to symbolize the stable and consolidated rule of the Qing regime just like a large piece of rock. It would stand still forever in the vast ocean and would, under no circumstances whatsoever be wavered or toppled.

Occupying three fourths of the total area of the Summer Palace, Kunming Lake plays important role in the adjustment of the temperature in the garden. Taking a walk in the Long Corridor and a dragon boat on the lake, you will have a wonderful feeling that you were the emperor and empress in ancient China.