Tian’anmen(Gate of Heavenly Peace), situated at the center of Beijing meaning in English, symbolizes the People's Republic of China. Built in 1417, it was formally called Chengtianmen (Gate of Heavenly Succession). At that time, it was the front gate of the Imperial City. By the end of the Ming Dynasty, the uprising farmers led by Li Zicheng entered the city, but later when the Qing army marched upon Beijing, the Chengtianmen was destroyed under the crossfire. In 1651, it was rebuilt and named "Tian'anmen". 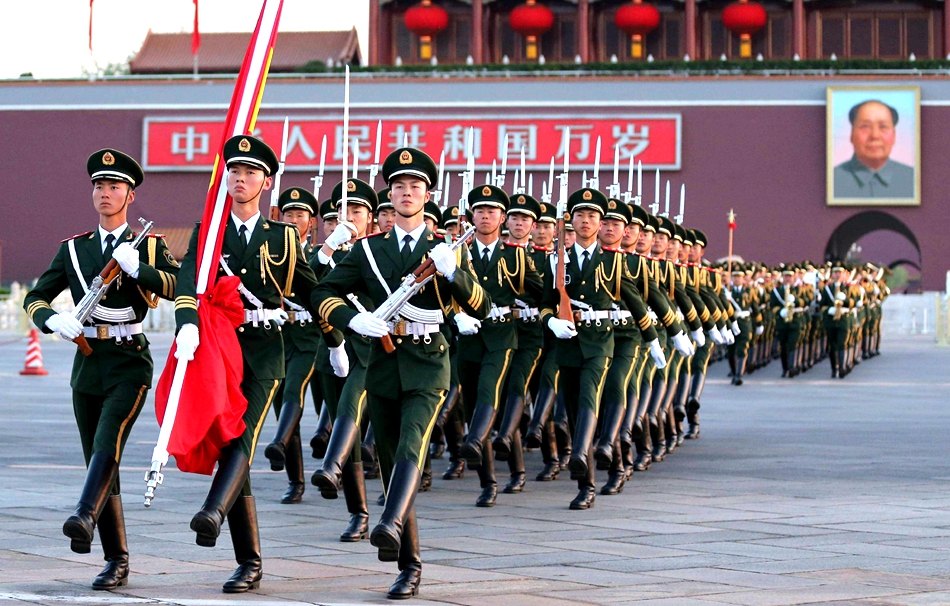 The Tian'anmen Rostrum, as a place to hold ceremonies of great importance, such as promulgating an imperial edict conferring the title of a queen, or announcing a newly enthroned emperor, was made known to the public all over the country. During the Ming and Qing dynasties, it was popular to hold the Imperial Exam system for choosing high-ranking officials by way of a palace examination, which supervised by the emperor himself. If the examinees ranked the first three, they would be entitled. What’s more, they would have the honor to be granted an audience by the emperor two days after the examination. On that day they would be called in to see the emperor in turn in the Tian'anmen Rostrum.

During the Ming and Qing dynasties, the Tian'anmen Square was a piece of land in front of the Imperial Palace, an open space jetting out towards the south from the Tian'anmen Gate. It had a meaning of embodying the outstanding importance of the Tian'anmen Gate and the Imperial City. In the early days of the Ming Dynasty, a gate of brick and stone was built, which is right on the site of the present Memorial Hall of Chairman Mao Zedong, called Damingmen (Gate of the Great Ming). In the Qing Dynasty it was renamed as Daqingmen (Gate of Great Qing) and after 1911 Zhonghuamen (Gate of China). Later on, another two gates of brick and stone structure were built on each site of the avenue in front the gate. Surrounded by a newly built red wall, the area within the three gates formed a small square of only 11 hectares-- Tian'anmen Square.

During the Ming and Qing dynasties, common people were forbidden to enter the Tian'anmen Square. And for the officials, when they entered the gate, they had to get off horses and proceed on foot into the palace. The government offices were lined outside the wall on the east and west. According to the traditional system, the civil service organizations were set in the eastern part of the square, and the military organizations in the west.

Old buildings in the Tian'anmen Square were put down after the collapse of the Qing Dynasty in 1911. In 1957, the square expanded with an area of 44 hectares, which may hold 1 million people at a time. With Chairman Mao's Memorial Hall right behind, the Monument to the People's Heroes towered in the center of the square. To the east of the Square, there is the National Museum of China and to the west the Great Hall of People (National People's Congress building).

The Monument to the People's Heroes is the largest monument in China's history which was built in 1952. On this monument, you can see the words--"The People's Heroes are Immortal", which were written by Chairman Mao. The development of Chinese modern history and those who contributed their lives to the democratic progress are shown by the eight unusually large relief sculptures. The monument is enclosed by two rows of white marble railings. It seems very simple and beautiful.

At the south side of the Square is the Memorial Hall of Chairman Mao Zedong. This Hall is consisted by three halls, among which our dear Chairman Mao's body lies in a crystal coffin in the halls surrounded by fresh bouquets of various famous flowers and grasses.

The Great Hall of the People is in the west of the Square. Constructed in 1959, this building is the site of the China National People's Congress meetings, which also provides an impressive site for other political and diplomatic activities. With twelve marble posts, the Hall includes three parts--the Central Hall, the Great Auditorium and a Banqueting Hall. The ceiling of the Central Hall is decorated with crystal lamps and the floor paved with marble. The Great Auditorium behind the Central Hall can hold 10,000 people, while the huge Banqueting Hall can seat 5,000.

At the east side of the Square stands the China National Museum, which is another important place for you to visit. Built in 2003, it is a mergence of China History Museum and China Revolutionary Museum. This National Museum is on the opposite of the Great Hall of the People. In the China Revolutionary Museum, there are a lot of material objects, pictures, books and models, presenting the development of modern China. A large number of cultural relics are exhibited in the China History Museum, illustrating the long history and glorious culture of China from 1,700,000 years ago to 1925 when the last emperor left the throne.