As the first Buddhist temple built with the assistance of Government in the Eastern Han Dynasty (25-220), White Horse Temple (Baima Si), the cradle of Chinese Buddhism, is of great significance in the development of the Buddhist in China. Having witnessed centuries’ changes, White Horse Temple has been reconstructed for several times, among which the one conducted at the order of the Emperor Wu in Tang Dynasty (618-907) was the most impressive one. 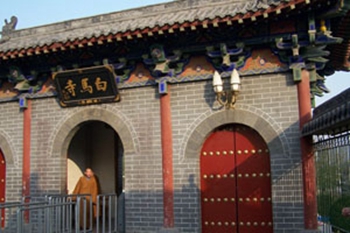 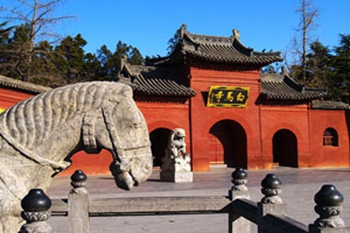 In addition to the exquisite lifelike Buddha statuses in magnificent hall, the typical oriental architecture designs and the towering pines flourishing around the peaceful temple, there are some special scenic spots for you to experience how Emperor Ming in Han Dynasty practiced his study and how the eminent monk Tian Zhu practiced the translation of the Buddhist classics from India.

White Horse Temple is a rectangle courtyard facing south. The gate of the White Horse Temple was built in Ming Dynasty (1368 - 1644) and it is three arches side by side. Covering a total area of 40, 000 square meters, the temple mainly consists of Tianwang Hall, Great Buddha Hall, Daxiong Hall, Jieyin Hall, Qingliang Terrace and Pilu Pavilion, which are all distributing along the north-south central axis.

Great Buddha Hall is the second hall of the temple. It is the place where the grand Buddhist ceremonies are held. The existent hall dates from the Ming Dynasty (1368 - 1644). In its center sits erect a statue of Sakyamuni which is closely flanked by two Bodhisattvas Wenshu and Puxian, and his two disciples Ananda and Jiaye. Behind stand the statue of Avalokitesvara.

In the southeast of the hall, a huge bell is hung from the beam. It was said that when the bell is struck, the toll could be heard far away. More interesting is that once the bell is tolling, the one in Bell Tower in Luoyang Old Town will response it quickly due to the sympathetic vibration. 'Horse Temple Bell', one of the eight scenes in Luoyang city was named after it. The hall also house eighteen Arhats that are lifelike in modeling and unique in gesture and are treasures in Buddhist arts of the Yuan Dynasty.

Ticket Price:
35 CNY
Half for students, teaches and the people between 60-69 years
Free for the kids below 1.4 meter, the disabled, the retired, the soldiers, the people over 70 years

Location: 12 km away from Luoyang City

Transportation: Bus No. 56 will bring you here directly (I hour)