Mausoleum of the First Qin Emperor

Together with the pyramids in Egypt, the Mausoleum of First Emperor of Qin shares the reputation of the world’s largest imperial tomb. The differences between them are the former is built above ground, while the latter under ground. It is a more splendid but luxurious mausoleum than any other mausoleum before, which takes a time as long as 38 years to complete. On entering in it, you will be shocked by the amazingly magnificent vision and the unprecedented huge scale. 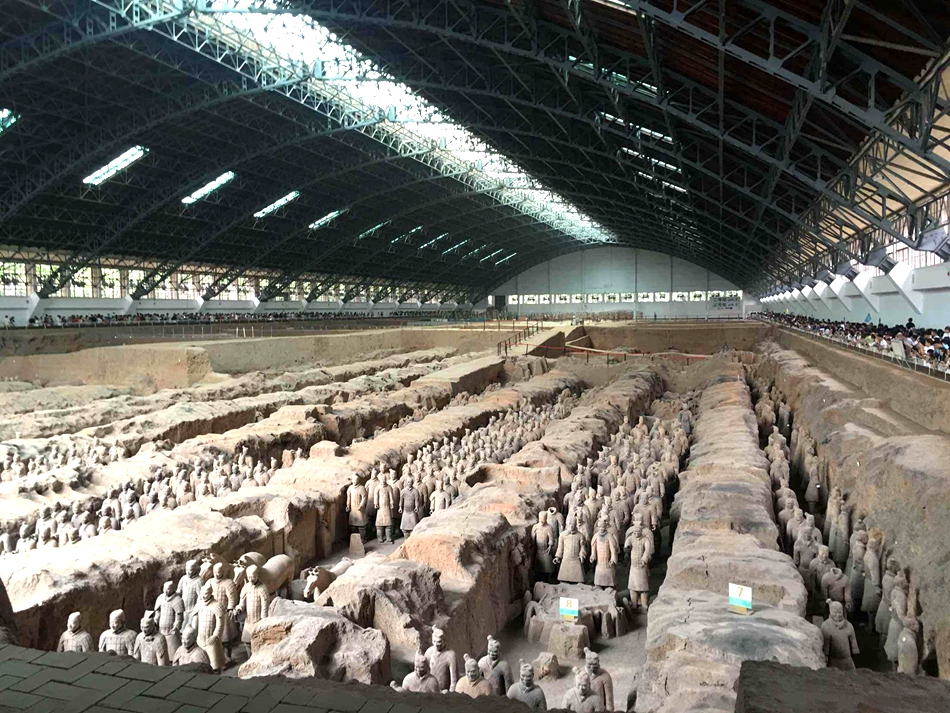 Lies peacefully in the cuddle of the steaming mountains and roaring Weishui River, this giant imperial tomb embraces a great number of valuable art works. To be exact, the mausoleum, with a double-wall as defense, covers 56.25 square kilometers, which is 78 times large as the Imperial Palace in Beijing. When take a closer view of the Terra-cotta Warriors, you will be surprised by the lifelike expressions and customs they are in as well as the life-size-big warriors. Let alone the various gestures and different looks, the hairstyles of them will make you amazed. Owing to the exquisite handicrafts, all the warriors can be told apart from one position to another, officer or soldier, infantry or cavalry.

While the Terracotta Warriors forms only part of the tomb. Greater things are yet to come.

Thanks to Ssu-ma Ch'ien, a great historian in early Han dynasty, archeologists can learn from his works about the great insight on the mausoleum’s construction, such as the coffin was cast in bronze and the underground Palace was gem-studded replica of imperial housing above ground. Moreover, booby traps with automatic-shooting arrows were installed to deter would-be tomb robbers. Heaven and earth were represented in the central chamber of the tomb. Ceiling shaped into sun, moon and stars by inlaying pearls and gems symbolizes the sky and the ground was an accumulation point of rivers, lakes and seas, like Yellow River and Yangtze River, which stands for the earth.

The discovery of the marvelous terracotta warriors has indeed thrown the whole world into shock, but what is worth to be studied is the materials unexcavated. Qin bricks and tiles, engraved with decorative patterns, are strew everywhere around the tomb. There are many satellite tombs built as accompanying decorations of Qin Shihuang. Ministers, princesses and princes, the famous and the not were inhumed there. The burial pits for horses, rare birds and pottery figures were regarded as the sacrificial objects to the Emperor. Hence, the remains from these tombs and pits are beneficial for archaeologists to make further research.

Finally, let see who is living inside this splendid mausoleum. Qin Shi Huangdi (259-210 BC), the first emperor of China, ascended the throne at the age of 13, when the construction of his tomb began. On completion of his many conquests, he ordered 720,000 conscript laborers to hurry up on building his royal tomb. It was finished just-in-time in 210 BC for his use.