Jiaxiu Tower, One of Eight Great Sights in Guiyang

Located in the center of Guiyang city, Guizhou province, Jiashu pagoda is a magnificent wooden tower built on a huge tortoise-shaped rock on the nanming river. Built during the Ming dynasty (1368-1644), the tower has undergone six renovations. It was once one of the eight scenic spots in Guiyang. Now, as a landmark and cultural symbol of Guiyang, it certainly deserves to be included in your plan. 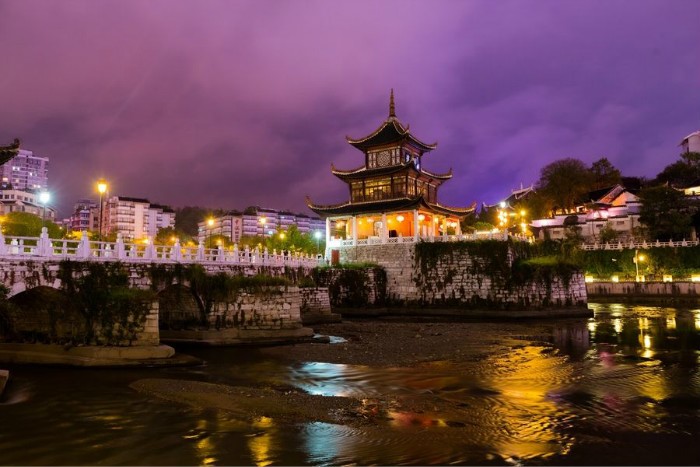 It is the longest bridge in Guiyang city, about 92 meters (300 feet) long and about 7 meters (23 feet) wide. It is the longest bridge in Guiyang, measuring 92 meters (about 300 feet) long and 7 meters (23 feet) wide. The bridge is decorated with white stone walls, like a jade belt across the nanming river; As a result, it was named fu yu qiao, literally fu yu qiao. Thanks to its superb technology, fuyu bridge is both beautiful and strong. It has experienced many floods, especially the devastating one in 1996. At the top of the bridge stands a magnificent stone arch. Hambitine stands on the bridge.

Walk down from fu yu bridge to jia xiu building. In ancient times, many intellectuals studied hard here for academic honor or official positions. To encourage them, the local emperor ordered the construction of a tower and awarded it the name jia-xiu, which means “to get the first place in the imperial examination.” Interestingly, since the tower was built, guizhou has witnessed three top scholars, two of whom are said to live near the nanming river. Today, guizhou is still an auspicious place

The jiashu tower is a 20-meter (66-foot) three-story tower. Green tiles, red pillars, carved Windows and white stone walls make the tower gorgeous and striking. From the top of the tower, you can enjoy the beautiful scenery of the surrounding city. If you’re not a big fan of old buildings, the night view of the tower of London is just as impressive. The tower is decorated with colorful lanterns, which are beautifully reflected on the water. Walking on the bridge on a cool summer night is also a pleasant experience.

As a cultural relic and historic site, jiaxiu building was favored by scholars in the past. They left precious works, such as calligraphy works, wooden works, poems and stone tablets, on display in the first floor. Of all these relics, the most famous is a long couplet written by liu yushan, a scholar of the qing dynasty (1644-1911). The masterpiece consists of two parts: the first line describes the beautiful scenery of guizhou province, and the second line tells the history of guizhou province. The 206-character couplet is comparable to the “first couplet” of kunming grand view garden. You can easily find the long couplet on the door on the first floor.

To the south of the tower is the cuiwei garden, a group of buildings dating back to the Ming and qing dynasties. There are gongnan pavilion, cuiwei pavilion and longmen academy. These exquisite buildings have a distinctive southern Chinese architectural style. In addition to these ancient pavilions, there is a modern exhibition hall in the garden. This unique hall displays the traditional clothing, embroidery and batik of almost all the minorities in guizhou.

Canton Tower - The Landmark of Guangzhou
Chinese Cloisonne, a Unique Art Form in China
Former French Concession in Shanghai
Zhaozhou Bridge, One of the Most Famous Bridges in China