The Epidemic Situation of Chinese Pneumonia in Guangxi

At present, 100 confirmed cases and 2 discharged cases have been reported. There are 7 severe cases, 3 critical cases, no death cases, no medical staff infection cases.

In total, 16 cases were confirmed in Nanning, 12 in Liuzhou, 21 in Guilin, 5 in Wuzhou, 23 in Beihai, 8 in Fangchenggang, 1 in Qinzhou, 5 in Yulin, 2 in Baise, 6 in Hechi and 1 in Hezhou. Wuzhou and Fangchenggang each recovered a patient discharged from hospital

At present, 3487 close contacts have been traced and 2700 cases are still under medical observation.

Experts remind that during the period of the epidemic, the masses should reduce or stop the gathering as much as possible, because the gathering of relatives and friends provides favorable conditions for the epidemic of the disease in the process of preparation and eating. In the process of preparation and gathering, people are close contacts with each other. The droplets produced by coughing and sneezing can be directly transmitted to the whole gathering population, which is very easy to cause disease Disease transmission. Wash your hands frequently, using running water and soap or hand sanitizer. When you have to go out, seek medical treatment or take public transportation, you should wear a mask correctly. 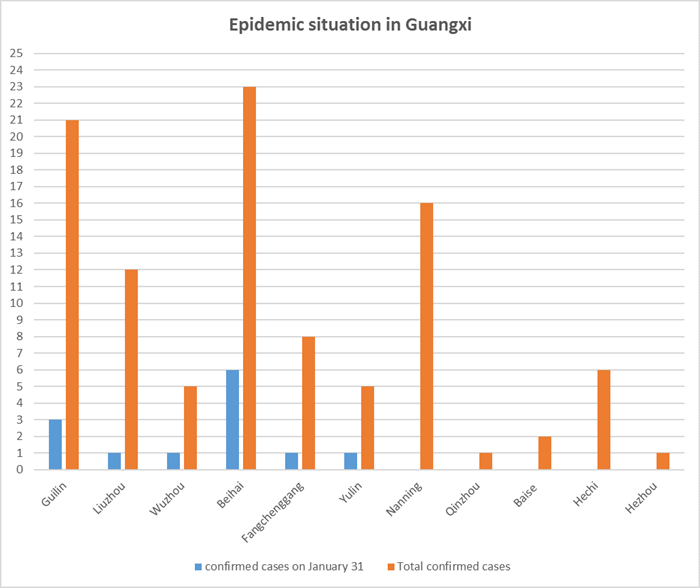