Xiangji Temple lies about 20 kilometers to the south of Xi'an. It is very close to the town of Wangqu. The two square brick pagodas were built over the ashes of the Buddhist Shandao, one of the patriarchs of Pure Land Buddhism, who preached salvation through faith, rather than meditation. Shandao had a great influence upon the development of Japanese Buddhism. With the recent strengthening of friendly relations between China and Japan, we are pleased that in May 1980, our friends in the Japanese Buddhist circle gave the Xiangji Temple a gilded wood sculpture of Shandao, some musical instruments, a stone lantern etc. This pagoda was built by a disciple named Huaiyun and is 11-storeys high. 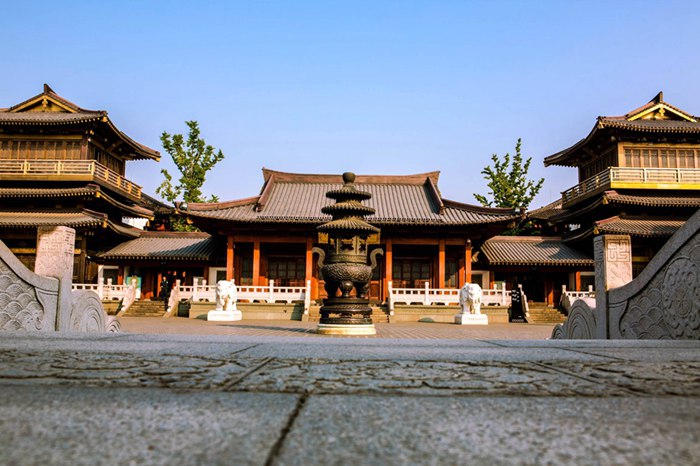 There is a smaller five-storey brick pagoda near the eastern side of the bigger one, which was built to commemorate Jingye, a disciple of the Buddhist Shandao. Originally, around the pagoda were the buildings of one of the great temple-monasteries of Tang Chang'an. For some reason, it disappeared long ago. The Jingye pagoda has brackets in relief which help it to imitate a wooden structure. There are about 25 monks who live in this temple. You can climb the pagoda with permission.

It is difficult to reach the temple by public transport and the journey may take over two hours. No.215 bus leaves you at a village 6.4 kilometers from the temple. Then, you can change to another bus or walk to reach the temple. If you choose to walk, you will be rewarded with beautiful scenery in the countryside.