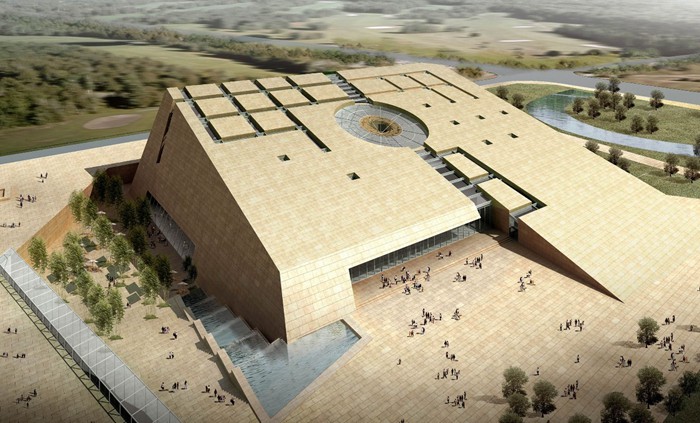 In 2007, jinsha site museum was rated as national 4A tourist attraction and national first-class museum.

The two main buildings of chengdu jinsha site museum are relic hall and exhibition hall, both of which adopt the form of slope, symbolizing the rising of jinsha site. The relic hall is nearly round, and the exhibition hall is square. One circle and one side symbolize the ancient Chinese cosmology of a round heaven and a round place. The two buildings are located on the north and south Banks of the river, and are integrated into the garden area. Chengdu jinsha ruins museum has also become a landmark of chengdu.

The garden area of chengdu jinsha site museum is designed with the concept of “the beauty of nature and the interest of grass and wilderness”. The green coverage rate is up to 80%, which is an organic part of the museum. In garden areas, trees and vegetation are divided into different areas according to different characteristics. The main touring roads are lined with trees of very ancient sichuan basin, such as ginkgo, metassequoia and pinaea. Cherry blossom forest, peach blossom forest, pear forest, hibiscus forest, wintersweet forest, etc. Bamboo forests and shrubs cluster around the museum building.

The design of the roof of the jinsha ruins museum in chengdu has been integrated with the elements of jinsha and archaeology by the architect. The circular symbol is the pattern of the treasure of jinsha ruins museum, “the golden decoration of sunshine-bird”. The square around the pattern of sunshine-bird symbolizes the exploration used in archaeology.