Longjing Tea Plantations in China, The former embodies the aesthetic requirements of the culture of literati

West lake belongs to the category of cultural landscape, and longjing tea is also a part of the cultural landscape. The magnificence of the west lake is closely related to the cultural connotation endowed by the poems and paintings of the above scholars over thousands of years, and has become a model of Confucian landscape aesthetics. And tea is after the tang dynasty from the buddhist temple, gradually become the fashion of literati, and even life indispensable.

From another aspect, the origin of traditional longjing tea is shifeng, longjing, yunqi, hugou and other places. These main producing areas are distributed among the landscape of west lake. Tea and west lake have been inseparable since ancient times.

Longjing tea has become a famous product with large planting area, high yield, high commodity rate and good economic benefit, and has been selected as state guest tea. A few years ago, hangzhou xihu district tea garden area of about 9000 acres, the annual output of longjing tea more than 500 t. Hangzhou west lake township tea garden area of 4597 mu in 1978; In 1997, the tea garden covers an area of 3300 mu, with an annual output of 185t longjing tea. In recent years, due to regional development, engineering construction, scenic spot expansion and other reasons, longjing tea garden has been reduced to the current 2700 mu or so.

The appellation of longjing tea has also gone through such a process of development, change and standardization in the future. In different periods, it was also called by different names. Before 1949, due to the different producing areas of longjing tea, the frying methods were slightly different and the products had their own characteristics. After the founding of the People’s Republic of China in 1949, it was changed to “lion, dragon, plum” 3 categories, produced in longjing village, xihu township, known as “lion character longjing” or “lion peak longjing”, its natural quality is the best; Produced in west lake township meijiawu, fancun, yunqi, wai bridge area known as the “meizi longjing” or “meijunlongjing”, exquisite workmanship; The rest of the west lake township production is called “longzi longjing” or “west lake longjing”.

West lake longjing tea is a “golden name card” of hangzhou, a material and cultural relic with profound historical and cultural deposits of hangzhou and even China. She has been famous for thousands of years, enjoying the reputation of “green queen”, is the best tea, imperial tribute and national gifts, with its unique reputation in the Chinese tea industry to win the supreme position, ranked the top of China’s ten famous tea. 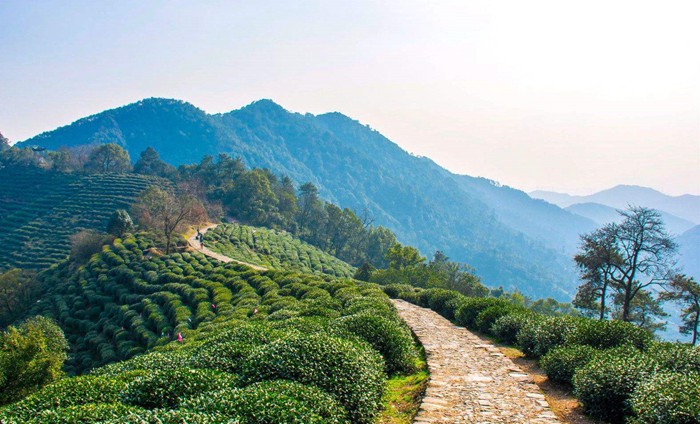