Labrang Monastery，A Propitious Place in the Hearts of the Tibetans

Located about 1 km (0.6 miles) west of Xiahe county, Gannan prefecture, Gansu province, the rutan temple is located in the city. It is an auspicious place in the hearts of tibetans, standing by the daxia river facing longshan. The temple is famous for its rich Tibetan culture, magnificent buddhist architecture, unique Tibetan food and long prayer banner corridors. Since the release in 2004 of the famous Chinese film “there is no thief outside the sky”, the Labrang monastery has become a well-known filming location for tourists. 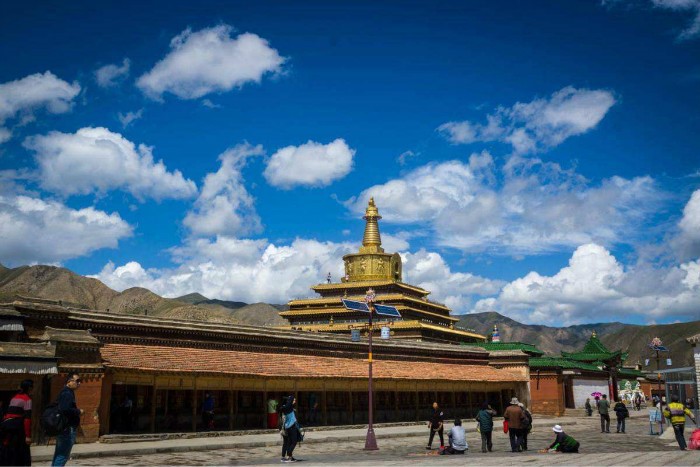 It is a holy place for buddhist believers to learn the essence of Buddhism. In its heyday, it had more than four thousand monks. As in the past, the monks chanted sutras together every morning. Labrang monastery holds seven large gatherings every year, among which the calling ceremony in the first lunar month and the release ceremony in the seventh lunar month are the most solemn. The previous one lasted 15 days, from 3 solstice to 17 in the lunar month.

The monastery covers 866 hectares (about 2,140 acres) and contains thousands of rooms, painted red, yellow and white according to function and class. At dawn or dusk, when the sun illuminates the golden spires with its rays, they all look magnificent and solemn. At night, the sky above the temple is also impressive, creating a mysterious atmosphere.

The architectural layout of Labrang monastery is typical of the Tibetan style. The symbol of the whole building is the white tower of northeast and northwest. The temple has the wen si academy, an open buddhist academy and five closed buddhist institutes. Wen si academy is the center of the temple, also known as the grand hall. The buddhist temple is located in the northwest corner of the big buddhist temple. Other halls spread out in the shape of a crescent and were ornate.