Qinghefang ancient street is a section of hefang street at the north foot of wushan, hangzhou. It is only a few hundred meters away from the beautiful west lake. Covering 13 hectares (32 acres), the street is the only well-preserved part of the ancient city. It is the epitome of hangzhou’s long history and the best place to embody hangzhou’s historical and cultural characteristics. 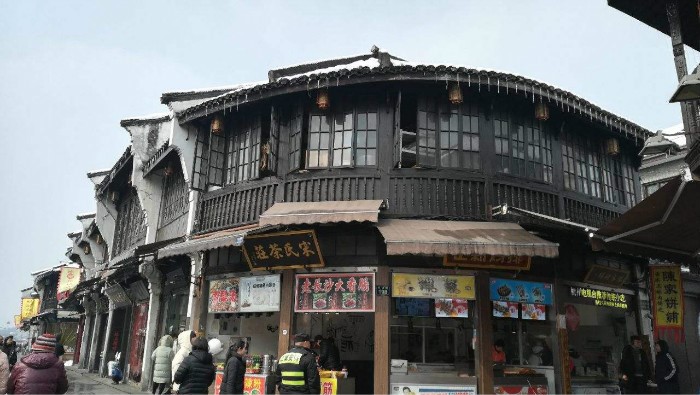 Qinghefang ancient street has been the busiest street in Beijing since ancient times. In the southern song dynasty (1127-1279), qinghe fang had many shops, restaurants and teahouses and was the political, cultural and commercial center of the city. After all these years, it’s still a thriving business district. This ancient street is home to many famous century-old shops, such as wang xingji fan shop, zhang xiaoquan scissors shop, bandung ham shop, huqing yutang pharmacy, baohe tang pharmacy, zhuangyuanlou, wan ruixing, one yuan store, jingyang guan, Yang tang shop and so on.

In April 2000, the shangcheng district government put forward the vision of qinghefang. Their suggestion is to protect the Ming and qing dynasty historical buildings in hangzhou, which are located along the 460-meter-long qinghe fang. This renovated street exudes a sense of the past, boasting culture, entertainment, commerce and sightseeing that attracts citizens and tourists from home and abroad. At present, there are still 16 old streets and lanes, including zhongshan middle road, hefang street, gulou bay, gaoyin lane and so on. From the layout, mainly from south to north, from east to west for the auxiliary passage. Most of the existing old buildings on the street are in the style of the late qing dynasty, and the well-preserved “four-corner architectural complex” is a representative work of hangzhou’s traditional streets. Seen from one end of the building, it combines a static structure with a dynamic crowd and is visually pleasing.

The Charm of Sweet Tea
Xuyuan Garden, Famous for its Unique Southern China Gardening Style
The ice and snow tourism in Xinjiang
The Forbidden City was Only Built in Three and a Half Years.