In Dunhuang, Gansu province, China, we found the Dunhuang Mogao grottoes, which are composed of the Mogao grottoes, the Yulin grottoes and the west thousand Buddha grottoes. 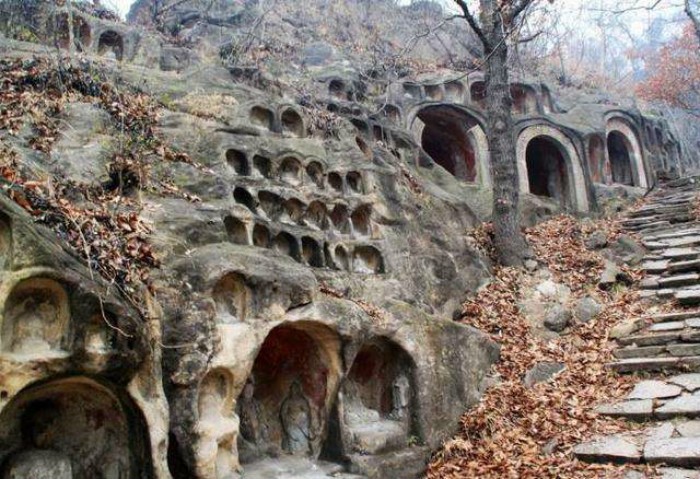 To the west lies the thousand-buddha cave on the western side of the mogao grottoes, perched on a cliff by the dang river, 35 kilometers (22 miles) from dunhuang. Because the cave paintings in this cave are similar in structure and artistic style to those in the mogao grottoes, the western thousand-buddha cave is considered as dunhuang buddhist art. Although the exact age of the caves is not known, some speculate that the caves may have appeared earlier than the mogao caves.

In cave no. 4, we found several large statues. They have strong bodies and long eyebrows. In the fifth cave, which was decorated during the wei dynasty, we found an inscription written by a buddhist disciple named tanzang for his dead grandparents and parents. So far, more than 70 Chinese characters are clearly visible. Moving on to cave 7, we see one of the most famous aspects of the cave, a painting of a flying apsaras, a buddhist god (known for dancing and singing), so vividly painted that it seems to be alive. Herdsman yurts in no. 9 cave have unique shapes, which provide valuable reference for the study of ethnic customs in gansu. In buddhist lore, the great warrior god enriana appeared beneath some of the statues. In these caves, many colorful murals tell colorful buddhist stories, making these caves one of the best sources of buddhist art in China.

China's Acrobatics, Which is the Best in the World
Yalong Bay, the No.1 Beach in Sanya
Qingyan Ancient Town, One of the Most Famous Historical Towns in Guizhou
Naked Marriage in China, the Most Fashionable Wedding Style for the 1980’s