Huangdi, The Father of Chinese Civilization

Huangdi: the leader of the ancient Huaxia tribal alliance, the co-owner of the Chinese nation in ancient times. The first of the five emperors. It is respected as the “first ancestor of humanity” of China. It is said that he is little code with the treasure of the son, this surname Gongsun, after change ji surname, it is called Ji Xuanyuan. Ju Xuanyuan of the hill, Xuanyuan, built in the bear, also known as the bear. Also known as “Di Hongshi”. 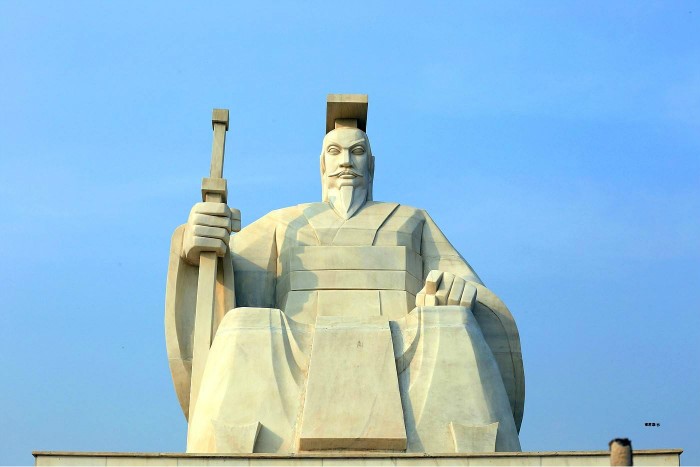 History of the yellow emperor because of the earth of virtue, so the name Huang di. Huang di’s great achievement of unifying the Huaxia tribe and the conquest of the eastern yi and the jiuli tribes has been recorded in the annals of history. During the reign of the yellow emperor, he planted trees and plants in baigu and vigorously developed production. He began to make clothes, build boats and cars, make music and compose the internal Canon of the yellow emperor.

During the reign of the yellow emperor, great achievements were made in architecture, science and culture. Palaces and ships were designed, and arithmetic and medicine began to appear. He instructed his people to plant corn and invented tools to guide the way of travel. With the help of his wife, people began to raise silkworms and spin silk. In addition, writing and Musical Instruments were invented by his officials. In short, many of the works came from the period of the yellow emperor.

Huang di was buried on a bridge in Huangling county, Shaanxi province, and his tomb, now known as “China’s first mausoleum”, has been visited by countless people both at home and abroad, especially during the Qingming festival. yellow emperor was the first leader with great morality and wisdom in the early development of Chinese civilization, people regard him as the ancestor of the Chinese nation and call themselves the descendants of the yellow emperor.

Wuhan, One of the “Four Furnaces” in China
The Best Times to Visit the Great Wall
Hengshan Road, A Road Full of Exotic Atmosphere
Cathedral of the Immaculate Conception in Beijing