Pingyao is a well-preserved “ancient city” famous for its ancient buildings and China’s first bank. Located between Beijing and xi ‘an in northern China, it is suitable for lovers of photography and history.

It is an outstanding han Chinese city in the Ming and Qing dynasties, and its historical features are well preserved. Pingyao ancient city wall, Shuanglin temple and Zhenguo temple are national protected cultural relics and world heritage sites. 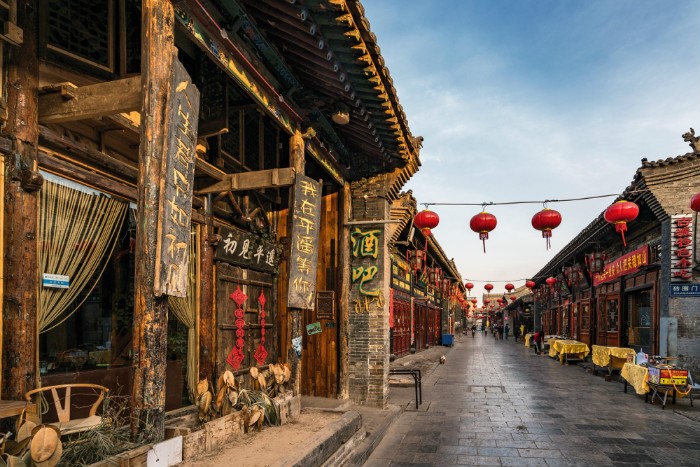 Pingyao was the birthplace and earliest bank of shanxi merchants, and was the financial center of Shanxi Province during the Ming (1368-1644) and qing (1644-1911) dynasties.

Pingyao was included in UNESCO’s world heritage list on December 31, 1997 because of its well-preserved urban landscapes from the Ming and qing dynasties.

Pingyao is a famous city in China’s tourism industry. Although it no longer thrives on trade, its historical and cultural heritage makes it one of China’s premier tourist destinations.

Pingyao is temperate continental climate, hot summer and cold winter. The average maximum temperature is 29°C(84°F) in July and 2°C(35°F) in January. The middle seasons offer the most comfortable weather, the freshest air in the summer and the lowest prices in the winter.

Summer is usually hot, and July and August are the wettest months, with 100 millimeters (4 inches) of rain. Most of the rain in pingyao falls in summer, drying up the rest of the year.

In the middle of winter, strong winds blow in from the north and nighttime temperatures are around 10°C (14°F). The temperature difference between day and night is large, and the air quality is poor in winter, but not as good as in big cities in the north.

Song Ci, Another Type of Poetry in Song Dynasty
Why Do Chinese Celebrate Chinese New Year in China
Haihe River, the Largest Water System in North China
Ancestral Temple of the Chen Family in Guangzhou

No comments so far